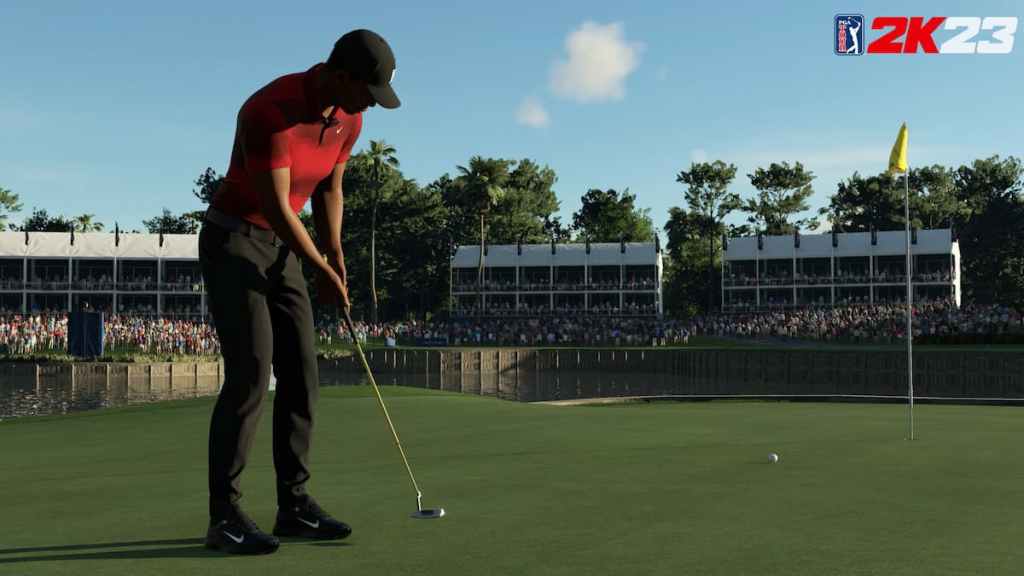 In 2020, 2K re-branded HB Studios’ The Golf Club franchise. This led to the release of the first title in the PGA Tour 2K franchise: PGA Tour 2K21. 2K21 marked a new era of golf games, as it resulted in the first triple-A game since the old Tiger Woods/Rory McIlroy PGA Tour franchise to incorporate real PGA golfers and bring the sport back to the forefront of sports gaming. 2K21 was a solid first entry, and now 2K looks to build with the release of PGA Tour 2K23.

This second title is a groundbreaking one for a few reasons. For one, it marks the first triple-A golf game to be released for the Xbox Series X and PlayStation 5. Second, Tiger Woods is back, not just as the cover athlete but also as a playable golfer and a creative director behind the franchise. With EA Sports PGA Tour slated to be released in 2023, 2K23 is set to be an opening salvo in the EA/2K battle. But did it land fair on the course? As far as gameplay is concerned, it’s not too bad at all.

Step back onto the course

PGA Tour 2K21’s gameplay system relied heavily on stick skills. The two primary ways to golf were by way of using either the left or right analog sticks. For PGA Tour 2K23, a new three-button combo using the A/X button has been added to the game. With this combo, players have to tap one button to determine a shot’s power, timing, and direction. It’s one that certainly is worth using for newcomers, as it only takes three taps to learn. This new addition should, at the very least, make the onboarding process a bit easier.

As far as the gameplay is concerned, the physics engine and gameplay haven’t changed much between 2K21 and 2K23. Those who used the sticks to golf won’t need to re-learn anything, as the controls are pretty much the same. It might sound odd — and somewhat unsurprising to some — to hear that a sports game plays the same as compared to its predecessor. However, the gameplay of 2K23 is not the problem. Rather, it is other parts of the game that bring this title down.

The Clubhouse builds matter this year

Arguably the biggest difference between 2K21 and 2K23 is the presence of MyPlayer builds. In 2K21, the only way to upgrade a golfer was through the clubs. As we touched on in our preview of PGA Tour 2K23 earlier this year, this title was going to bring a big change. Developer HB Studios added three new components: Archetypes, Fittings, and Ball Sleeves. These, along with club upgrades, make up how a player can modify a golfer’s attributes and fine-tune their strengths and weaknesses.

To me, this was a much-needed change. Adding Archetypes, which vary from driving-heavy players to precision experts who know how to shape and putt, add variety to avatars and playing in MyCareer. After all, each golfer in the real PGA has strengths and weaknesses, so why not have the same in PGA Tour 2K23?

However, the existence of Fittings and Ball Sleeves could prove to be pernicious, and a lot of that has to do with MyCareer. PGA Tour 2K23’s career mode offers a lot of what its predecessor did: a rival system that has been slightly expanded to allow for different pathways, and an endorsement system where players can obtain clothing and customization options. While Fittings and Ball Sleeves can be obtained through defeating rivals in MyCareer and from playing the game, the amount needed to really mold a MyPlayer into a well-rounded machine is massive. You just won’t be able to supplement that through grinding in MyCareer.

All that begs an important question: what is the future for MyPlayer and builds? Is this a softer introduction to what NBA 2K does with MyPlayer & MyCareer? I hope not, even though it’s understandable from a financial standpoint why developers and publishers have gone full steam ahead into microtransactions. However, what’s not good is the practice of pricing people out of playing 2K23 thanks to too many barriers. That can happen, so there is a delicate balance that needs to be found with the future of Fittings, Ball Sleeves, and VC for PGA Tour 2K.

The course could use a bit of a trim

One of the most notable omissions from 2K23 is the existence of online leaderboards. Yes, 2K23 does have online play. Users will be able to participate in online leagues through Societies, or play in traditional golf, skins, Divot Derby, and the new Topgolf mode, amongst others. However, no online leaderboards for any of these actually exist. Leaderboards were in 2K21, but not for 2K23. It’s not ideal for those who want more of a competitive experience, or just bragging rights.

Additionally, Societies don’t really have any control to limit the playing field in 2K23. This goes back to the issue of Fittings and Ball Sleeves, as there is no way to cap the amount used. If you’re trying to run a more competitive Society and want to have as even a level as possible from a cosmetic/attribute standpoint, that’s not possible.

Those two points, coupled with a lack of a concede putt option — something that would speed up online games in general — make the online part of 2K23 feel relatively incomplete. It would be nice, in general, to have more features that cater to all PGA Tour 2K players, whether that be casual or competitive ones.

That doesn’t mean that every other mode is bad in 2K23. Course Designer is back, bringing creativity back to the forefront in golfing. And getting back to MyCareer, it’s fine, but it doesn’t really have any exciting features. I wouldn’t advocate for a story mode, but more avenues to acquire customization collectibles, alongside other off-the-course commitments like press conferences and corporate events — with VC as rewards — could make this a bit more palatable.

PGA Tour 2K23 is a decent golf game, and it is the route to go if you didn’t play 2K21. 2K23’s gameplay doesn’t have any glaring problems, and it offers enough of a challenge that makes attaining a low score that much more satisfying. Its biggest issues are with what PGA Tour 2K23 does not offer.

A lack of basic online features, coupled with a MyPlayer system that does rely somewhat on microtransactions makes me just a bit worried about where this franchise is headed down the road. If you plan on playing with just the single-player modes, perhaps these two points are not that big of a deal. Nonetheless, the lack of these features, along with game modes that don’t move the needle all that much, make this a fine, but not great golf game.