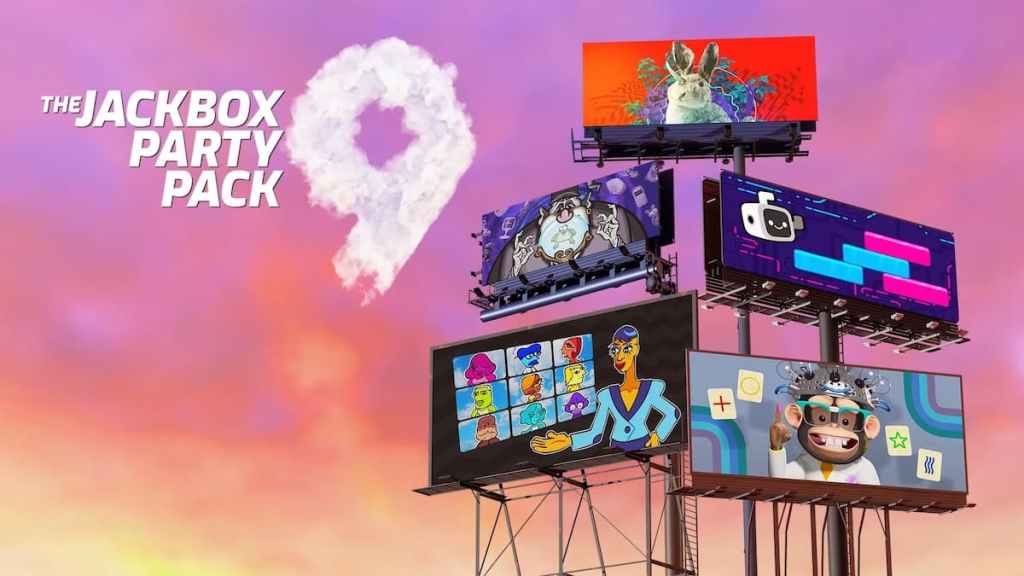 Several elements make the annual Jackbox collections of games so enduring and enjoyable, and one that Jackbox Games should be proud of is the series’ accessible nature. Even for those who don’t game, Jackbox provides experiences with concepts easy to wrap one’s head around. And while The Jackbox Party Pack 9 still mostly succeeds in continuing this streak, some offerings in the 2022 title are a little less high concept.

I’m always lucky to be testing these games with friends and players who are “veterans” of the Jackbox series. Even when a particular game is somewhat complicated, there are still reference points we use from previous packs to understand it — a literacy of Jackbox, almost. But looking at Fibbage 4, Junktopia, Roomerang, Nonsensory, and Quixort, I have to imagine that some casual players jumping into one of these party games might find the rules to require more brain juice than needed.

It seems that every one of these packs needs an old standby, and The Jackbox Party Pack 9 has that in Fibbage. The popular game returns, giving weird fun facts and leaving part of it blank; players then have to input plausible-sounding lies to fill in the blank, and then guess the truth from all the options. The aesthetic is a bit random and absurdist — player icons include a moth with claws and a skull with eyeballs and feet. A new round type uses old movie clips instead of fun facts, eerily reminiscent of RiffTrax: The Game.

Fibbage: Enough About You from The Jackbox Party Pack 4 returns; once again, instead of using trivia fun facts, the prompts are based on personal questions given to the players. It’s still a great game amongst close friends or as an icebreaker. However, my sessions of Enough About You lacked the final round from the previous iteration of the game, which used to ask you for one truth and one lie. The goofy style of Fibbage 4 and some omissions from previous versions made this return somewhat inferior to its predecessor — a new for a legacy Jackbox game.

The premise of Junktopia revolves around the idea of trash as treasure; as humans who have turned into frogs, a mysterious wizard tasks you with selling strange little trinkets by coming up with names and two details about these objects. These can include quirky paintings, statues, or household objects with a twist. Players then “appraise” the products, and the player with the most money at the end wins and turns back into a human.

Much like Talking Points from The Jackbox Party Pack 7, this is a game where verbal presentation is crucial; players can choose what order they want to present their facts and add a bit of zest to their presentation. Of course, those lacking public speaking skills or confidence can have the game do it for them, but it’s always a plus to be given opportunities to be funny for your friends. With some clever quips, a charming presentation, and foot-tapping music, Junktopia is a winner here.

Related: The 7 best and funniest Jackbox games to play with friends

The star of this party pack is likely going to be Roomerang, Jackbox’s take on a reality television show. Each player chooses a role (i.e., “Naughty Scientist,” “Hates Mopeds”) before participating in this competitive game, where point totals are hidden from other players until the end. Each round presents players with a prompt, and they can either play up their role or use their answers to seed discord and target other players; everyone votes on the best response, and the round usually ends with a vote on who to eliminate.

Luckily, being eliminated doesn’t mean that’s the end for the player; they come back as a new character — one with the same name, albeit with one vowel changed. Despite the host’s uncomfortable post-modern painting look, the characters are pretty adorable, especially when they return after elimination with extra headgear, i.e., a hat or cat ears. It’s hard to recall the last Jackbox game that had this level of role-playing, and it easily became the repeat favorite of the pack amongst my friends.

Featuring an unsettling 3D-rendered monkey named Professor Nanners, who looks like something from The Adventures of Jimmy Neutron, Nonsensory is an intriguing premise with an execution that led to some head-scratching. It’s difficult to verbalize — the tutorial even has player participation, something I’m not used to in Jackbox — but this game depends on your ability to understand how your fellow players will respond to certain prompts.

For example, the game might ask a player to come up with a movie title, based on that fictional movie’s chance of winning Best Picture at the Oscars. I wrote “Titanic: Back 2 the Surface” (admittedly stolen from a classic YouTube parody trailer) since the prompt asked for a title with a 100% chance of winning that award. Players are then prompted to guess the probability of it winning Best Picture; some might take “Titanic 2” as Oscar bait that will definitely win (which is what I was going for), and others will interpret it as a trite attempt to capture lightning in a bottle twice and vote for a lower number. Basically, you have to be able to read minds to know what other players were going for, if they even understood what they were supposed to write in the first place.

Finally, there’s Quixort, a game that I will make a bizarre argument about — I think it plays far too much like an actual video game. Think of this as Tetris mixed with trivia, if you had to give trivia answers in a contrived manner. Players will split up into teams of two; teams will alternate voting on a topic, and each player on the team will take turns dropping blocks and putting items in the right order. One instance had a team putting the lyrics of The Golden Girls theme song from start to finish. Good luck with that one if you’re below a certain age.

It’s really the luck of the draw, and the idea of stacking and ordering these blocks seems like an unnecessary way to turn these prompts into something more interactive. Not to mention, the other team not playing in a round simply interacts with a clicker on their phone to prevent it from going to sleep, which is maybe the laziest thing I’ve seen in a Jackbox game. Perhaps Quixort would work better as its own separate game, with some expansion. But as part of a larger collection, it may go the way of the forgotten interactive action game Zeeple Dome from the fifth pack.

If you’ve played the bulk of the previous Jackbox games, and you are down to roleplay, make your friends laugh, speak up, think hard, and take your time, then The Jackbox Party Pack 9 should have at least a few games to engage you. There’s still fun to be had from these titles, and having one or two favorites while never touching the other games is pretty standard for each pack. But it’s certainly not a starter pack for new players or family members who may have never touched a game before. Maybe stick to Scene It? with those folks.