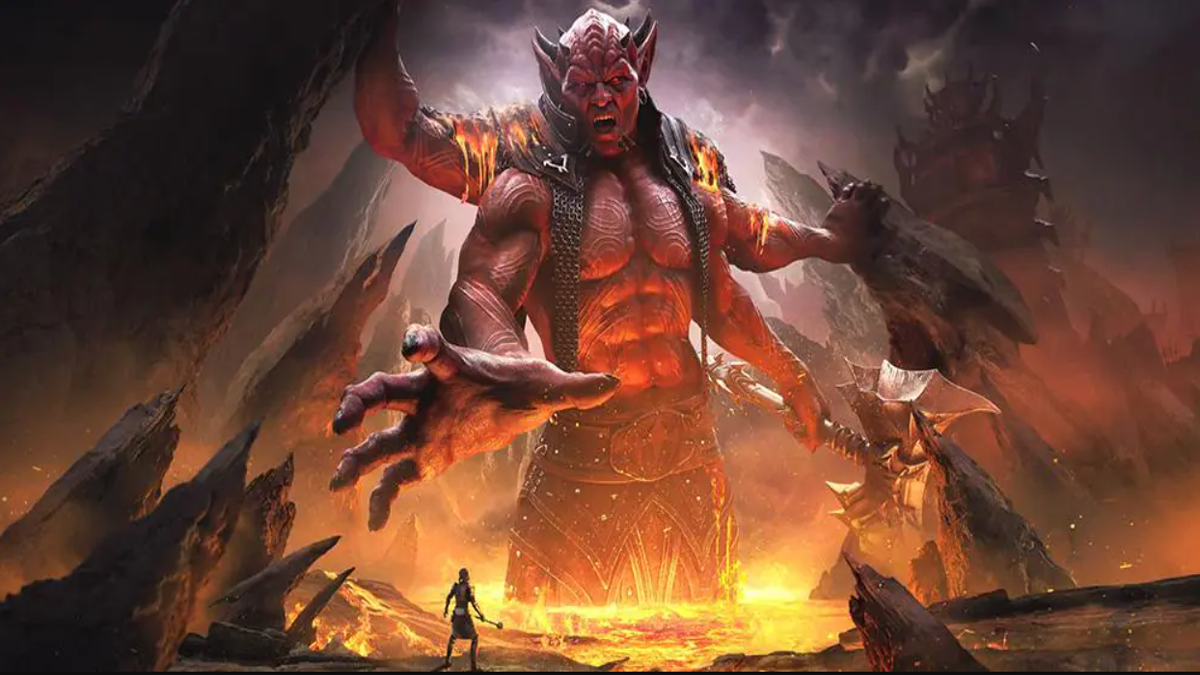 When I first stepped into the Deadlands in Elder Scrolls Online, I knew right away it was going to be a fantastic experience. It reminded me of walking through an Oblivion gate in Oblivion for the first time or first departing the boat in Seyda Neen in Morrowind. There is a sense of familiarity and nostalgia, and it felt good to explore an uncharted yet recognizable location. For those who haven’t played previous games — there is so much to see and do in the expansion; it all feels like its own condensed game and way more than DLC.

My time in Deadlands continued to bring back memories of past games in the franchise and previous Elder Scrolls Online expansions. I’ve been a fan of the series since The Elder Scrolls III: Morrowind, and Deadlands meets every expectation of the third game in the series. From its stunning locations, complicated and diverse characters, and large open map to explore, it’s picture book Elder Scrolls. Both provide a sense of enormity in the way they tell their story and showcase their world.

I never bonded with any lore or narrative from other MMOs such as World of Warcraft. I was just running around the world as a toon. In Deadlands, I felt every bit connected with the heroic adventurer I was playing. I was invested throughout every plot point, from the main quest to the side adventures. Deadlands feels like a more polished expansion when compared to previous expansions and DLCs. The map may not be as large as Summerset, but there are equally as many things to do and see. You’ll encounter crafting locations, hidden shards, fascinating characters that have never appeared in any past expansion, and get to explore a unique and stunning landscape.

The overall narrative sees the Order of the Waking Flame cult attempt to free Mehrunes Dagon from Oblivion. It’s by no means a new concept for the franchise. Heck, the main plot of the original game has you fighting to stop Molag Bal from doing practically the same thing. But the story of Deadlands feels different, more unique, more engaging. You spend most of the expansion fighting against the cult to uncover how they plan to release the Daedric prince. After arriving in Deadlands, you meet a mysterious figure called the Anchorite. They’re connected to the cult activity, but their memory has been erased. All she knows is she was sent to find Lyranth — a Daedra character you meet earlier in Blackwood — to help stop the cult. You band together to put an end to the cult. Along the way, you find out they are using a machine that turns Daedra into raging abominations and encounters a few key figures the cult needs to complete their goal. The characters you meet all have their own desires and goals, and the voice acting makes each feel more lifelike and realistic.

The main plot is pretty straightforward — stop the cult and prevent Mehrunes Dagon from world entering Nirn — it isn’t convoluted or complicated, nor is it cliched where you are the chosen one, destined to avert the end times. It plays out like a Sherlock Holmes novel and has you investigate why and how the cult is planning to release the Daedric Prince of Destruction. You’ll spend your time speaking with NPCs, searching for clues via books or conversation, and building an army of unique characters to help thwart the cult. And while the game focuses heavily on combat, you can even complete many of the quests without fighting a single enemy.

The story is split into two major arcs. The first is a standalone chapter in the Deadlands expansion, while the second continues the Blackwood chapter. The first main quest doesn’t even touch on the events of Blackwood, so you don’t have to worry about being confused if you jumped into Deadlands without playing Blackwood. You do end up learning about what happened in the previous event, which helps set the scene for arc two, but it’s all still its own narrative with its own supporting characters.

ESO has seen numerous DLCs and expansions, each with their own plot. They aren’t directly connected, but you can meet characters that will show up in future DLCs. Deadlands continues the trend by having familiar characters who help or hinder you. It’s part of what makes it so captivating. Instead of going in alone, you get to partner with characters and hear their point of view on world events. It’s a superb way to tell a story and makes the world feel alive and fluid.

One of the best aspects of Deadlands is its wandering bosses — the Havocrel. They are a new addition to ESO where you will need to team up with multiple other players to bring down Irncifel the Despoiler, for instance. They aren’t found in dungeons or delves but instead are located around the Deadlands map. They spawn randomly and walk around the map until they are defeated. They are challenging and worth tackling.

Now, ESO is an online game where you can adventure with a full party of other players, but not everyone wants to play that way. If you feel like going in alone, Deadlands is also designed for you. At its heart, ESO still very much feels like a single-player video game, and Deadlands certainly fits that bill. You can complete the main quest entirely by yourself. However, there are a few side quests you will need to team up with other players.

Deadlands is a remarkable end to an all-around great chapter for Elder Scrolls Online. As we wait for the Elder Scrolls VI to release, I can’t help but wonder if it should pull more inspiration from Deadlands. Maybe not the multiplayer aspect or mechanics, but in the way it tells its story. Deadlands isn’t the biggest expansion, but it voices a grand narrative in its compactness. It doesn’t have the grandeur of places like Elswyr, Skyrim, or Summerset, but it does include characters with a deep and rich background, enchanting locations, and a gripping narrative that keeps you invested and wanting more.