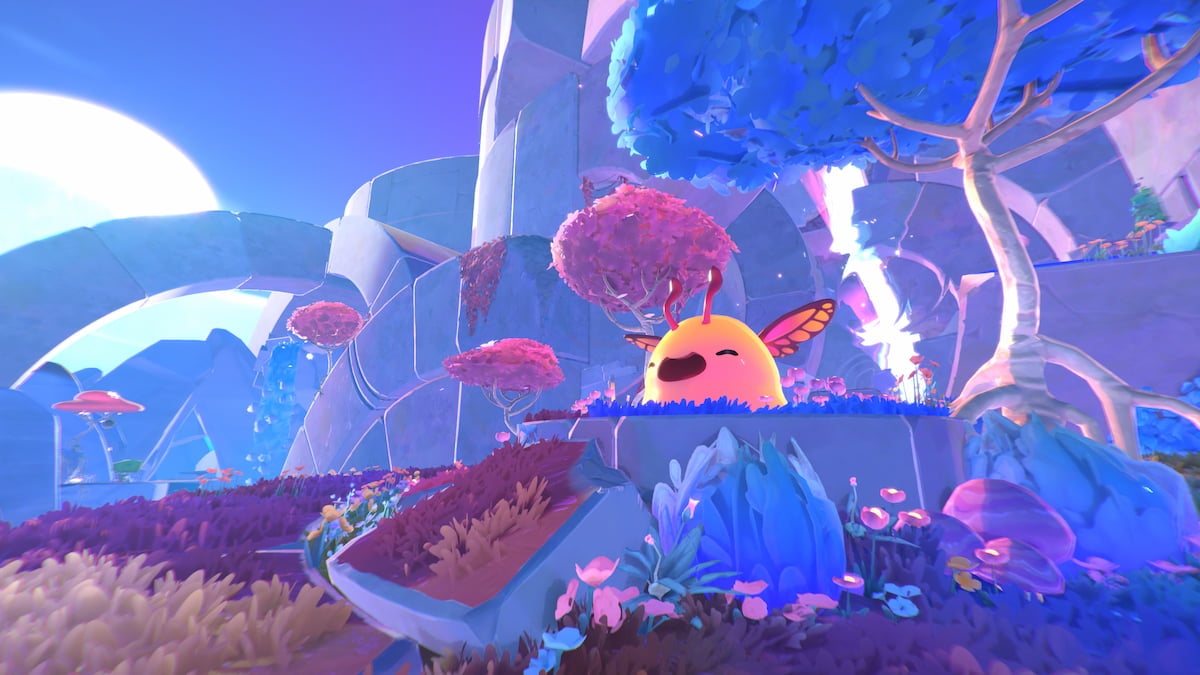 Slime Rancher 2 has entered early access on Steam and Xbox, and has so far been met with overwhelmingly positive reviews all around. This is mainly due to how the devs at Monomi Park have mastered translating the experience of what it is like to be a Slime Rancher into gameplay, although this comes at the cost of repeating what they accomplished with the previous title.

The second game in the Slime Rancher series is extremely similar to the original with the only noticeable changes being a new land and some new Slimes. You continue to play as Beatrix LeBeau as you explore the new land of Rainbow Island after a mysterious boat arrives with a note and whisks you away across the Slime Sea. This is a simple way to reset the character back to factory settings so you can start off without all the items you had previously.

The original Slime Rancher had a little bit of everything you could possibly want from a farm simulator-type game. You could build up your own corrals, chicken coops, and farms so that you can capture and care for the various types of Slimes. All of this mixed in with a large world to explore meant that you had something constantly on your mind, whether it was traversing the next part of the land, protecting your Slimes from danger, or just making sure the Slimes get their next meal.

Slime Rancher 2 takes everything that you loved about the original, raises the cute factor up to 11, and has you start all over. Everything that you would expect from the original makes a return except for items like the pumps and apiaries. This is amazing at first, but it quickly gets old when you realize that the game is almost identical to its predecessor, only set in a new environment with a handful of new Slimes.

Welcome to the color-filled land of Rainbow Island

The new land of Rainbow Island is pretty large for being an early access game. You have plenty of areas to explore, and even when you think you’ve seen it all, there is more to discover. The map is like a giant maze that never ends, which keeps you constantly searching for new areas and new items. On top of this, the land is filled with secret doors, statues, and Gordo Slimes for you to bypass which are all protecting secrets and treasures. All of this blends together in a fantastic map design that feels fresh but at the same time reminiscent of previous times.

As you explore the land, you will discover various types of Slimes, both new and returning. While there is a total of 17 different types of Slimes in the early access experience, only five of these Slimes are new to the series. I have no doubt that more new Slimes will be on the way when the game leaves early access, but for now, the main enjoyment comes from exploring the new world. Each of the biomes that house these Slimes feels alive and constantly moving. This is further emphasized by the random appearance of Tarr Slimes that destroy everything in their path.

Related: How to find Lucky Slimes in Slime Rancher 2

Overall, Slime Rancher 2 is a great continuation of the series that will take you around 10 hours to fully experience. While it does feel like a copy of the original, it has its own quirks that help it stand out enough to make it feel fresh (especially if you haven’t played the original in a long time). Most people may recognize stuff from the first game, but new players will feel the excitement of a new world filled with cute creatures and plenty of hidden secrets.

After you have seen all the game has to offer, it is easy to start picking it apart and realize that there aren’t many new aspects to the game. As Slime Rancher 2 continues and the devs at Monomi Park update it, it will undoubtedly add more sections to Rainbow Island and more Slimes for you to care for. When this happens, the game will start to feel more like its own entity instead of a copy of the past. In its current state, the game is great but may share too many qualities of its predecessor.