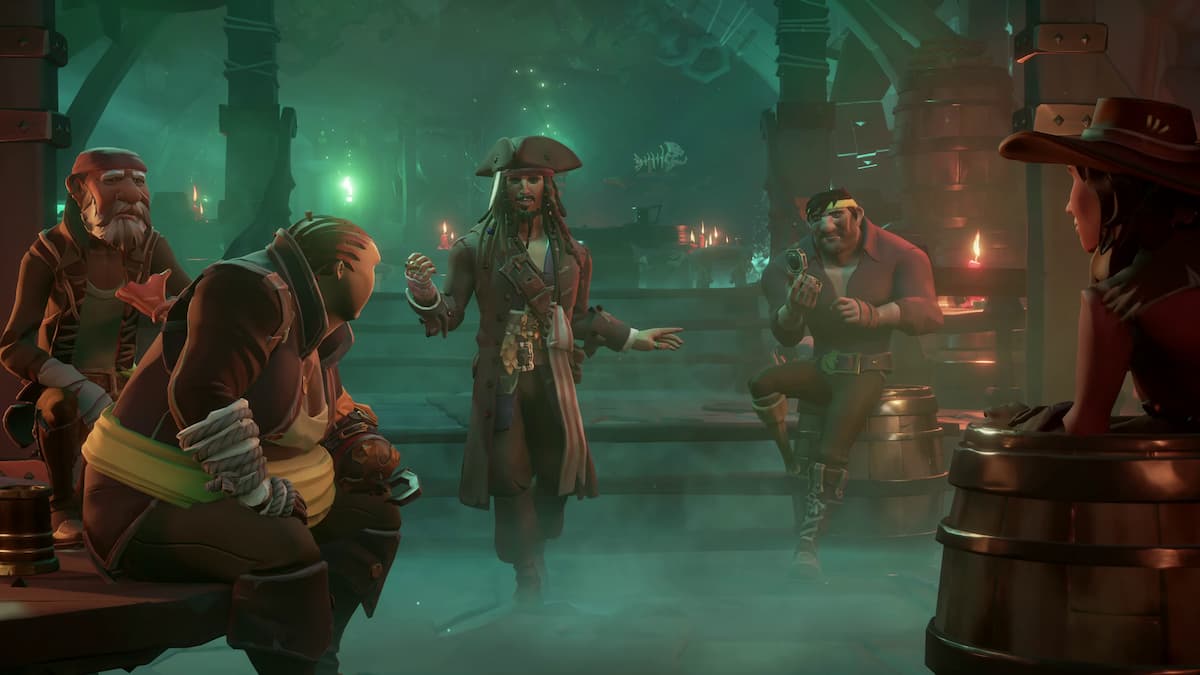 You will not be able to collect these journals until after you retrieve the Flame of Souls from the Blue Bayou ship and row yourself out. You do not need to find these journals in any particular order. Collecting all five Damned Journals will earn you the Lost Memories commendation. The first three are in the Whispering Bayou, and the other two are in the Fort of Lost Souls.

As you row out after taking the Flame of Souls, take a left to the opposite direction from the mysterious green veil and your ship. You will reach an abandoned shack on your left. Stand in it, and notice a rocking chair and a banjo leaning on a bench — to the left of these objects is a torch. Light it with the Flame of Souls, and the chair will rock, the banjo will creepily play, and a journal will materialize on the bench.

Row to the east of the Bayou, and you should encounter two cliffs with a broken mast in between them. Hanging on the mast are two cages. You will want to go to the bottom of the lower part of the mast, so go around that cliff on some rocks and light the torch you find there with the Flame of Souls. Then, look at the two cages — one of the ropes is thinned out, so shoot that rope to make the cage fall. Swim down into the water, open the cage, and the journal is inside.

Also in the east part of the Bayou is a narrow stream of water, and next to it is a shack. While most of these structures are derelict and have broken stairs, this one has its stairs intact. There is a broken rowboat covered in barnacles to its right. Go up the stairs, and immediately to your right is a torch to light. Turn around, and you will see that a number of torches are lighting themselves, creating a path that leads you to the right.

Follow the torches until it takes you to deeper water. Swim underwater, and you will see an oar pointing you in a direction. Follow this to a sunken rowboat — the journal is sitting in the back of this rowboat.

Once you enter the fort, observe four Braziers in a circle around a well. Light all four of these Braziers to open up a trapdoor that leads to the well. Jump inside into the water and climb up the ladder. You will see that one skeleton is chained to the wall, trying to escape before their death. It is holding a torch, so light it with your Flame of Souls. This will cause a Damned Journal to materialize on the other side next to another skeleton.

At the bottom of the well is a skeleton chained and weighed down — it is holding a lockpick, but this person clearly botched their escape attempt. Grab the lockpick and swim up midway to find a passageway to swim through. At the end, you’ll emerge and see a locked door to lockpick and open it to get back to the courtyard.

From the entrance, the right of the well has a jail cell, with an unlit torch to its left. Light the torch with your Flame of Souls, and a journal will appear in the jail cell. Unfortunately, the cell is locked from the inside. To alleviate this, go to the stone building to the left of the well. Pick the door open, and note that you will lose your lockpick after this. Go up the ladder and notice a thinning piece of rope. Cut it down, and a wooden platform with boxes ahead will fall down. Use these boxes to gain height and jump on the roof ahead; walk around the outline of the courtyard until you are above the jail cell, and you can fall through a hole in the roof to get inside.

There are five journals in the town of Isla Tesoro. Earning them will earn you the Forgotten Memories commendation.

Once you enter the town, go past the scene of Carlos getting dunked into the well. You will reach a clothing store called La Costurera. Open the door, enter the store, and look to the left by some bookshelves. The journal is on a stool.

From La Costurera, look to your right to see a hatch you can open. Go through and you can exit the store from the back. Continue moving forward to the larger part of town and walk past a Taberna sign on your right. The path will continue with stairs and a spiral, and eventually, you will reach a tunnel with moonshine barrels marked with three X’s. Walk past them through a door, and immediately to your right is a journal near some purple and pink flowers.

Doing the Treasure For Eternity commendation will take you on the right path for this next journal, though you can also find it later as you infiltrate the jail. You will need the Mercado key from the well that Carlos was getting dunked in, and you will need to take that key all the way to the Mercado building, light the torch on the second floor with your Flame of Souls, go past the ghost auction, and hop on the rowboat with the two skeletons. You will get into a tunnel that you have to manually open with a pulley, and inside the tunnel, you will see ghost pirates shooting at each other from across the tunnel. Stop for a moment and go on the left side of the tunnel — the journal is on a barrel near those ghost pirates.

After you witness Jack Sparrow pursued by other pirates and through a large closed gate, go past this gate and instead go up a long staircase to a fort. Up top will be two ghostly Spanish Defenders, but before them to the right is a journal on a wooden box.

After finding Jack Sparrow in the Treasury, go up the stairs and continue on that path, where you will encounter and eventually fight Phantoms. After this encounter, go forward in a zigzag path until you are on a roof. Jump down from the roof and a journal will be on a ledge to the left.