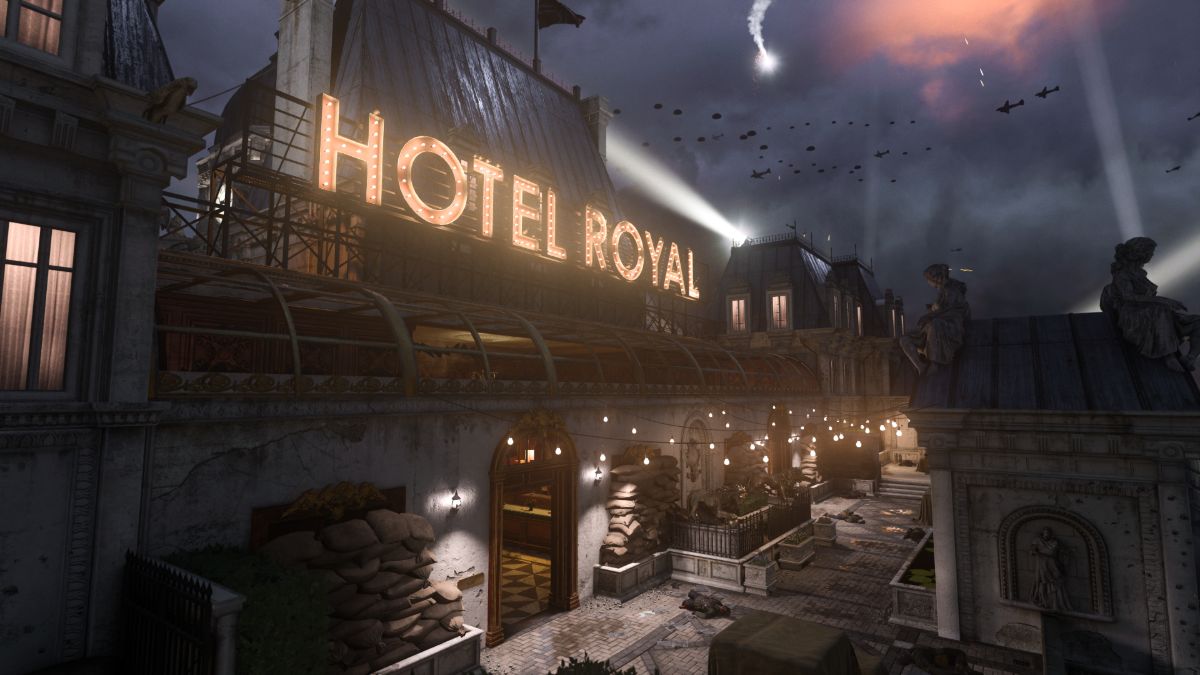 If you want to check into Hotel Royal, you’ll need the expertise and strategic know-how to succeed in Call of Duty: Vanguard. From understanding your positioning at the bar to the destructible environments, you’ll soon know how to kick your adversaries out of the hotel for good.

Taking room service to the next level, this map location has three different directions, just like Gavutu. On the left, you’ll find a courtyard (balcony) that is prime for snipers. In the middle is the bar that will quickly become a brawl, and on the right is an open hallway that is just chaos throughout the whole game. We recommend sticking to a short to a mid-ranged weapon in the middle and right sections of Hotel Royal while carrying a sniper for the left.

SMGs like the M1928 and STEN are particularly nasty on Hotel Royal as the M1928 can let you utilize a larger clip with a great rate of fire, and the STEN is extremely agile with a lower weight. You’ll need to move fast in the Hotel Royal map as the action is always intense. We’ve also noticed that DP27 is particularly popular with players as it’s a highly adaptable weapon in short, medium, and long-range scenarios. Assault rifles like the Itra Burst and the M1 Garand may struggle as the action is unpredictable. You’ll need to be ready for anything.

Let’s start with the balcony area. As said previously, this is a great sniping spot for those who want to take out soldiers running by. However, there are ways that snipers can be countered. Just before you hit the first gate, there is a side walkway across the roof. It is directly in front of the Eiffel Tower.

From there, you can sneak around the snipers, and if undetected, you can flank and take them out by the side. There is another way. If you’re entering from the bar area, a great spot to set up shop is by covering behind a flower pot. You can find it on the right side as soon as you leave the indoor area. This lets mid-ranged weapons stand a chance against snipers, and they won’t see it coming. The same strategy can be implemented on the opposite side but with the stone structure to the right.

There are two vertical levels of the Hotel Royal map: the rooftops and the hotel floor. On the rooftops, you’ll find windows peering into the kitchen or serving area, depending on which side you decide to enter. Shoot the windows to surprise a foe below. After you leave the elevator building facing south, there is a great spot to camp incoming players from the other side. Pass the elevator building, and on your immediate right, you’ll find a ramp. It will cover your right as you focus on the enemies coming up to the rooftop level. It’s a cheeky spot that will net you some killstreaks.

Next, is the bar area. The lounge and dining room overlook the action in the bar, but they’re inadvisable areas to hang out in for long periods of time. The reason for this is that there are three passageways into each room, which makes them problematic. We try to avoid the bar as much as possible as explosives are often thrown into the room, but you stand more of a chance crouching under the bar. We recommend using a mixture of the blind fire mechanic and the Field Mic field upgrade. You’ll know where each enemy is on the minimap, and then you can surprise them with your blind fire. Another great spot is behind a wooden table near the kitchen.

Lastly, is the hallway. This is another chaotic part of the map. With so much firepower and explosive damage straight on, we don’t recommend running into the mayhem. Instead, you can hover around the wine cellar and restroom on each side, peeking your head out every once in a while to get your kill. It also presents a decent viewpoint into the bar and overwatch areas (lobby and dining room).