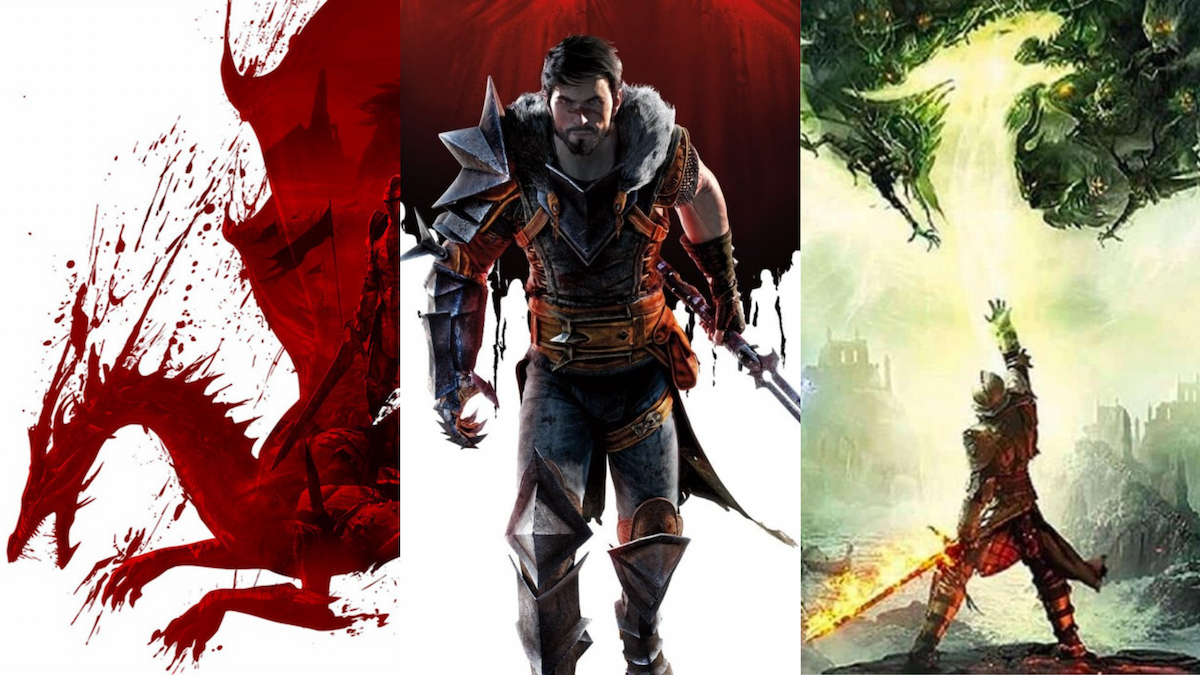 The Dragon Age series is one of the most popular and well-known RPG series around. Developed and created by Bioware, this fantasy franchise spans multiple games that give players a deep, rich world to explore and plenty of freedom to create interesting and unique characters, discover the many people inhabiting the world of Thedas, and take on epic adventures. Since this series is quite epic and has had more than a few games released, here is a helpful list of every game in the Dragon Age series, in release order.

Related: When is the release date for Dragon Age: Dreadwolf?

Dragon Age Journeys was a browser-based game developed by EA2D, and served as a tie-in to the first mainline game, Dragon Age: Origins. The game featured a hex-based combat system as well as a mixture of tactical role-playing and strategy. Players would earn achievements in Dragon Age Journeys, and in doing so, would unlock content in the then-upcoming Dragon Age: Origins. The original plan was to release three chapters for the game, with the first being The Deep Roads. Unfortunately, the second and third chapters were ultimately canceled and never released.

Dragon Age: Origins is the first mainline game in the series, and kickstarted the franchise back in 2009. The game takes place in the Kingdom of Ferelden, a region of the world Thedas, and a land plagued by the rising tide of the Darkspawn and a new Blight, a potential world-ending invasion. You play as your created character and are recruited into the Grey Warden, an ancient order of heroes who stand against evil and protect the people of Thedas. You and your companions are tasked with stopping the oncoming Blight and uniting the kingdom to aid you in your quest.

The game is considered by Bioware and fans as the spiritual successor to their previous works, Baldurs Gate 2 and Neverwinter Night. Dragon Age: Origins features tactical party-based combat with play and pause battle mechanics, character creation, loads of RPG elements, as well as a robust story. The game was a critical and commercial success that would go on to receive multiple DLC that included a new character, items, and stories.

Dragon Age: Origins – Awakening is the biggest DLC release for Dragon Age: Origins, and built upon the work set up in the original game. This DLC proved to be quite substantial, adding a new storyline set several months after the events of the base game. The story takes place in the land of Amaranthine, where players are attempting to rebuild the Grey Wardens after their defeat during the opening hours of Dragon Age: Origins.

This expansion included a load of new content such as new companions, enemies, items, and new class specializations for more gameplay options and playstyles. This DLC would later be bundled with the base game and other DLC as Dragon Age: Origins – Ultimate Edition.

Dragon Age 2 is the second mainline game in the franchise. The story is told via flashbacks from the viewpoint of Varric, one of the game’s companions, and focused on Hawke, a human refugee who flees the Darkspawn invasion of the original game and finds themselves in Kirkwall. Over an in-game decade, players take control of Hawke and become a key part of the major events that take place in Kirkwall, eventually rising to become the champion of Kirkwall.

The game had a new graphical style that the developers wanted to be darker and more distinctive. The gameplay also featured faster-paced combat, with quicker animations and movement to speed up the pace of combat, and aimed to make the console and PC versions functionally the same in terms of how they played. This entry also put more emphasis on companions’ stories and relationship with the player, having more dialogue and banter between each other and a larger presence on the story as well as their own detailed side stories.

This entry also had some changes that weren’t well received such as story elements, combat, dungeon design, and the apparent unimportance of player-driven choice as well as a lack of character creation and choice. Despite this, the game was generally well-received and went on to have a few DLC releases.

Dragon Age Legends was a short-lived turn-based, free-to-play RPG for Facebook and Google+, and much like Dragon Age Journeys, served as a tie-in to Dragon Age 2 set in the Free Marches. This web-based game involved two distinct forms of gameplay. One was building a castle, with different rooms providing things like creating potions and injury kits, whilst keeping residents happy. The other was combat which involved characters lining up in rows with characters in the back rows unable to be attacked until the front row was defeated.

This game ultimately shut down in 2012, and a modified offline version was released as a free download.

Heroes of Dragon Age is the first and only mobile game in the series. The game is a freemium tactical role-playing game and involves players creating squads of heroes from the Dragon Age universe and taking part in automatic battles. Depending on the character’s factions, abilities, and formation, players would have a greater or lesser chance of succeeding in battle. This entry didn’t feature any new backstory or lore, and instead explored “what if” scenario’s from pivotal moments of the series, including the books and other media. The game also featured a PvP mode.

Heroes of Dragon Age received a mixed response from critics, with many citing issues such as a lack of depth to the gameplay and the micro-transactions, as well as an overall lack of variety.

Dragon Age: The Last Court was a free-to-play browser game that involved drawing cards and managing resources. Players take control of Marquis of Serault and must use cards in order to accumulate resources like secrets and trophies to impress Divine Justinia V. Different cards would have various attributes and characters could be summoned and recruited, and cards would have a few options in how they can be used and the choices they presented.

The game was available via Dragon Age Keep but was shut down in November 2020. However, a few fans led an effort to preserve the project which can be found online.

Dragon Age: Inquisition is the third mainline entry to the series and the most recent game in the franchise. In this installment, players become the Inquisitor, the leader of a newly revived inquisition who tasks themselves with solving the many problems the world of Thedas is facing. This includes civil war, renegade mages, the cult-like templars, and the Breach, a tear between Thedas and the dream world of the Fade that floods the world with demons.

This entry’s gameplay combines elements from both the previous mainline games, with players able to use the more strategic elements of planning and commands, as well as take part in more action-oriented gameplay. Dragon Age: Inquisition also introduced some new mechanics and features such as Focus, a shared resource that can be used to unleash powerful moves, and an open-world approach to the game, with multiple varied areas for players to explore that are larger than any area in previous games. This is also the first game in the series to include a multiplayer mode, which involved cooperative dungeon crawling as an agent of the inquisition to complete missions and earn loot. This mode had no effect on the single-player.

Related: The best classes to play in Dragon Age: Inquisition

The game went on to have multiple sizeable DLC that included new storylines, items, and customization options and received praise from both fans and critics, citing its story and combat as some of its best features. Dragon Age: Inquisition won multiple awards, including best role-playing game and game of the year from several publications.

Dragon Age: Dreadwolf is the next upcoming game in the series, and will be the fourth main title in the franchise. Little is known about this entry so far, but based on teaser trailers and the information we do have, it is believed that Solas, a companion first seen in Dragon Age: Inquisition, will be the focus of this newest entry.

Development for this entry has been troubled to say the least. With the issues surrounding Mass Effect: Andromeda and Anthem, multiple developers were pulled from the project to help with those games. There have also been many key staff members, some of who worked on Dragon Age, leave Bioware, and ultimately the project was canceled in 2017. Development was restarted in 2018 with a live service component intended to be part of the game based on Anthem, but this was scrapped after the success of Stars Wars Jedi: Fallen Order, and instead the game was refocused into a single-player experience.

The developer recently announced that the game has hit the alpha stage of development and that the game is now playable from beginning to end, and they will now begin to work on iterating the gameplay features and visual fidelity. Hopefully, this means we won’t have to wait too much longer for this entry to see the light of day.