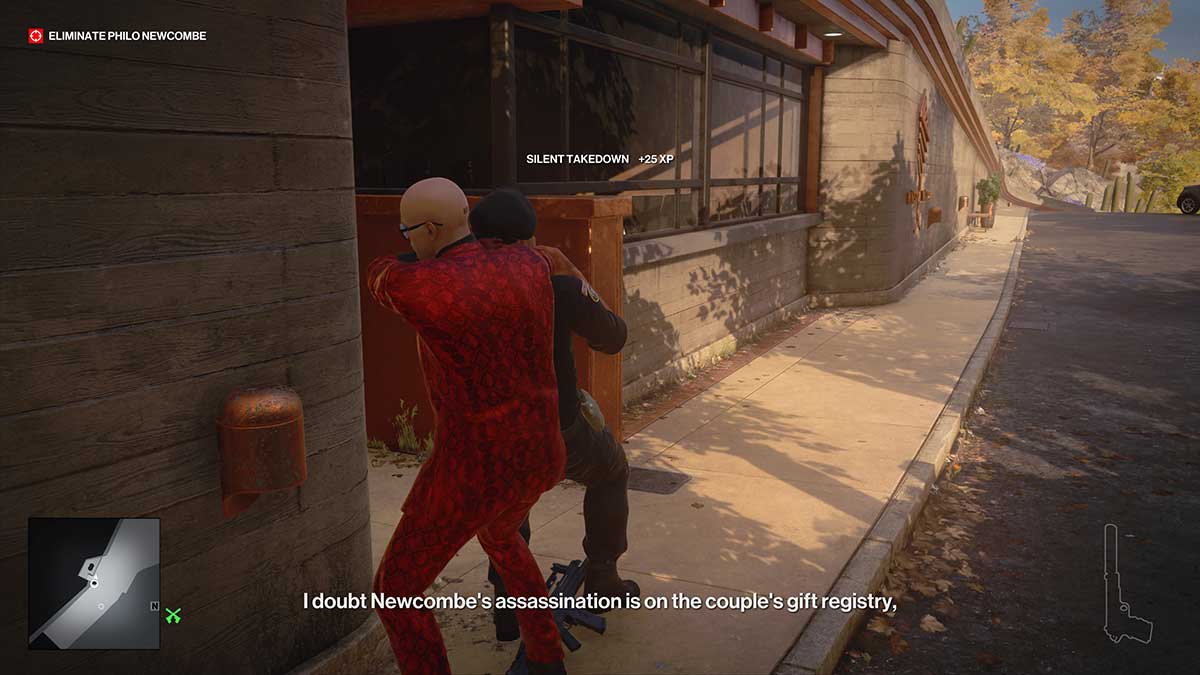 Update: February 4, 2022: IO Interactive has brought The Heartbreaker back for another try in Hitman 3. Thanks to an update from the developer, every Hitman 3 player that has already completed the Elusive Target once can play it again in Hitman 3 Year Two. All Elusive Target completions will count towards your suit unlocks, meaning that it’s still worth replaying these missions even if they aren’t the most exciting at times.

We’ve been back through the mission to see if anything has changed and can confirm that it’s the same as when it first launched for Hitman 3. This means that the route below for a Silent Assassin rank is still the one we’d recommend to any player looking to boost their level and take on a bigger challenge with this Elusive Target.

The Heartbreaker is a brand new Elusive Target for Hitman 3. Set in the location of Mendoza, players must take down Philo Newcombe before he murders one half of another happy couple to further his own relationship goals. In this guide, we’ll explain how to take this evil wedding planner down with a rank of Silent Assassin.

To keep things simple, our guide is based on using items and weapons unlocked from the start of the game. Therefore, you don’t need to complete any specific Escalations or challenges to follow this route.

As with every Elusive Target, you only have one chance to complete this mission. Once you start completing objectives, such as killing the target, you’ll no longer be able to restart. However, up until you’ve killed the target, you can restart the mission as much as you like. With this in mind, we recommend that you follow our route a few times without killing the target before killing them for real. This will give you a chance to understand where you could get spotted and what points you’ll need to be most careful in to maintain that Silent Assassin rating.

As we’ve mentioned, this route doesn’t require anything fancy that you have to unlock somewhere else in Hitman 3. The loadout we’re using is nothing special. While we have a coin, pistol, and fiber wire, we’re not actually going to use any of these items. The starting location is the important part, so make sure you set yours to be the Winery Viewpoint. Finally, we’ve equipped Agent 47 with The Scarlet Suit, which is a reward for completing The Lust Assignation if you’re eager to get your hands on it.

From your starting location, you need to turn around and head towards the two guards behind you. There’s one standing by the gate, and one slightly further away on the opposite side of the road. Get behind the guard at the gate and subdue him. Then move behind the guard on the opposite side of the road and do the same to him. Drag this second body back towards the gate just in case someone spots it. You need to change into the disguise these guards are wearing, and make sure you pick up one of their guns so the outfit is complete.

Now that you’re in a powerful disguise, run down towards the parting lot. On the left, there’s a cordoned-off area with cars. You’ll notice that the white van in there has also been altered to feature the Newcombe name. Get into this area and head to the van.

You need to run around the side of the van, open it, and take the scrapbook and lethal pills inside. This is a collection that Newcombe has kept containing notes on all of his kills. However, there is an enforcer right next to this van who can see through your disguise. Be careful as you collect the scrapbook and lethal pills, don’t worry about the rest of the stuff in the van.

Next, you need to find the target. If you’ve been quick, he’ll be heading into the reception area, but if not, then look for him in the cinema room that’s downstairs from the reception. He’ll be escorting two women wherever he is, and you need to give that scrapbook to one of them. As soon as you do, they’ll be horrified and promptly leave, meaning that Newcombe can’t kill one of them.

Now Newcombe will be upset. If you managed to get the scrapbook to his clients prior to them going downstairs, then he’ll be heading to the cinema room by himself. Get ahead of him and go down there first. Note that you must be frisked by the security guard a the top first.

At the bottom of the stairs is a stand with some wine on it. Crouch and poison this wine with the lethal pills. As soon as you’ve done this, get out of the way. Newcombe will come down the stairs into the cinema room and drink the wine. Once he does, he’ll die. This counts as an accidental kill, so you won’t lose your Silent Assassin rank when everyone sees the body.

Now all you need to do is head for an exit. In your current disguise, you can run into the vineyard and use that exit. If you’re wearing a different disguise or even Agent 47’s suit, then watch out for the new guard that has been posted on the gate down here for this Elusive Target.