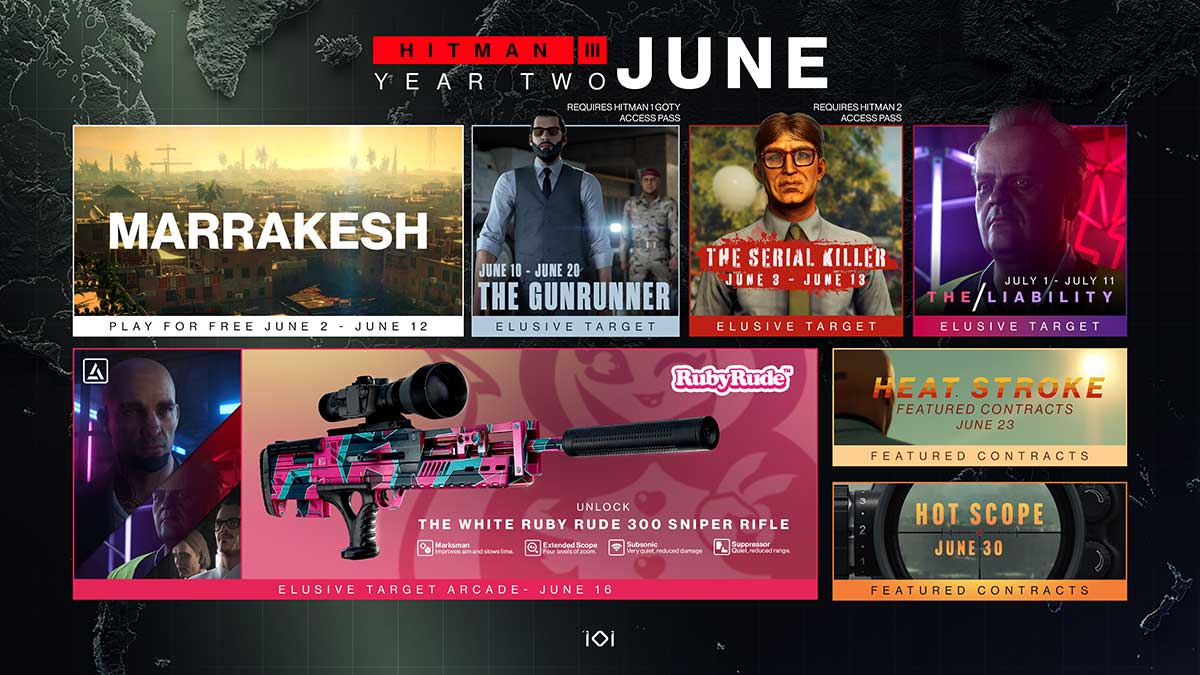 Hitman 3 Year Two continues to offer players more free content throughout June. In addition to a new weapon, there are more Elusive Targets than ever appearing over the course of the month. This guide outlines everything coming to the game in the Hitman 3 Year Two June roadmap, so you know when your targets will come along.

All Hitman 3 players will be able to access the Marrakesh location from Hitman 2016 from the beginning of the month. The mission and all of its challenges and rewards will be open to complete for a brief period without purchasing a pass for the game.

The Serial Killer is an Elusive Target from Hitman 2 and requires access to that game to play. This is the first time that a legacy Elusive Target has been in Hitman 3 without the location they’re set in also being available for players.

The second Elusive Target for the month is The Gunrunner. As with the above, this mission requires access to a previous game, Hitman 2016. This will require any player who hasn’t purchased the Hitman 2016 pass to do so.

On June 16, the new Elusive Target Arcade missions for Hitman 3’s Year Two June roadmap finally drop. These ones come with the opportunity to unlock a new custom weapon in the game, The White Ruby Rude 300 Sniper Rifle. It’s an impressive sniper rifle with all the bells and whistles you need to kill targets without anyone even knowing you exist.

A selection of new Featured Contracts will be added to Hitman 3 on June 23. This will contain several missions that the development team has put together to offer a more challenging experience in well-known locations.

On June 30, even more Featured Contracts are coming to the game. These appear to be focused on killing targets with a sniper rifle, something the community has been requesting for some time.

Elusive Target: The Liability – July 1 to 11

The final Elusive Target for the month is The Liability. This mission takes place in Berlin, so it’s included in Hitman 3 for all players. The target is an inept safety inspector, but taking him out is quite simple if you’ve played through the mission before.