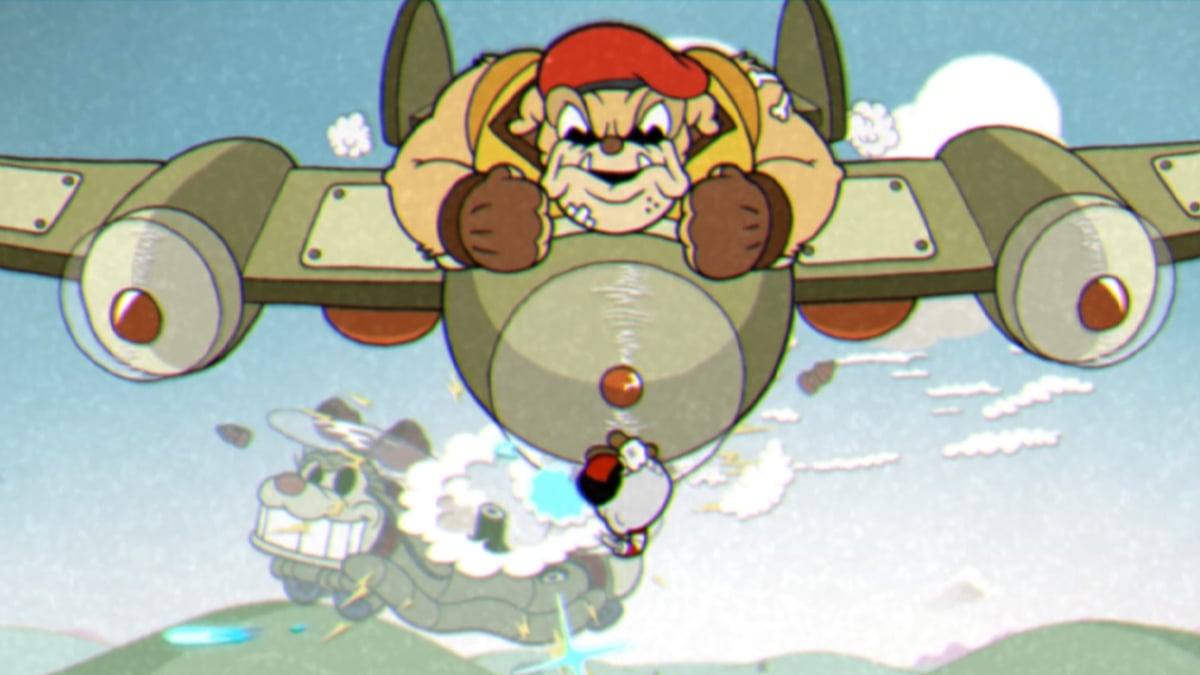 When you see the biplane sitting on Cuphead’s DLC island, you might think you’re in for one of the game’s shoot ’em up bosses. Instead, you’ll be in a dogfight against literal dogs. Here’s how to make the Howling Aces quit barking.

Related: How to beat Moonshine Mob in Cuphead: The Delicious Last Course DLC

First things first, you’re on a biplane for this whole flight, so take care not to fall off the side. Your first target is the big dog piloting the plane above you. The plane itself doesn’t fire, but the dog has a few attacks of his own. First, he might flex and send copies of his bone tattoo flying across the screen. These move high, middle, and low, and if you’re able, simply stand still for the first two and hop over the low one. Just be aware that they’ll come back across after a moment, and at least one of them is always pink (and can therefore be parried). The dog may also pull out a cat — duck to dodge the balls of yarn it splits across the screen.

There are two other things to look out for here. One, the co-pilot may throw down a trio of tennis balls from the plane. Two, after the boss takes some damage, fire hydrants will start slowly homing toward you. Fortunately, these can be shot down.

Phase two is simple, but hitting your targets can be tricky. You need to shoot down all four puppy jetpacks rotating around you. As they move, they shout letters in your direction (one of which will occasionally be pink). Stay planted as often as possible so that you can actually shoot your moving targets, and you’ll eventually bring them all down.

Alternatively, you can damage all their jetpacks without shooting them out of the sky completely. It’s tough to pull off, but listen for the sound of a jetpack going kaput — a trail of black smoke will also appear. Do this to all four flyers instead of shooting them down, and you’ll go to an alternate third phase.

For the regular third phase, you’ll be facing down the female pilot’s plane. When she’s on screen, she’s your main target. Otherwise, aim for the turrets that fire laser beams. The trails appear for a moment before firing, so take care to sidestep before you get blasted. The third beam will always be pink, and you must parry it to stay off the ground and avoid damage. Note that sometimes an extra beam will fire along with the pink one, so you’ll need to avoid that while parrying.

As you can see above, the real trick of this phase is the rotating camera. The battle moves through the same four angles on repeat, so you’ll always know what’s coming next. After the first round of lasers, you’ll be tilting to the left. It might sound silly, but simply tilting your head will work wonders here — you’ll actually be looking in line with the rotated controls. The dog bowls that cross the screen must be dodged, so jump over the red ones and duck under the yellow ones.

After this, the battlefield will be upside down. It’s the same laser phase as before, but your up and down aiming will be reversed. After that, you’ll be leaning to the right for the dog bowls again.

The alternate third phase is much less complicated. The pilot will pop out from various windows, so focus your fire on here. The puppies will toss pineapple grenades at you, some of which can be parried. When they hit the ground, they explode out in a trio of thorns, so remember to keep dodging even when you’ve avoided the initial impact. Lastly, the fire hydrants from the first phase return here, so shoot them down to keep the screen clear.