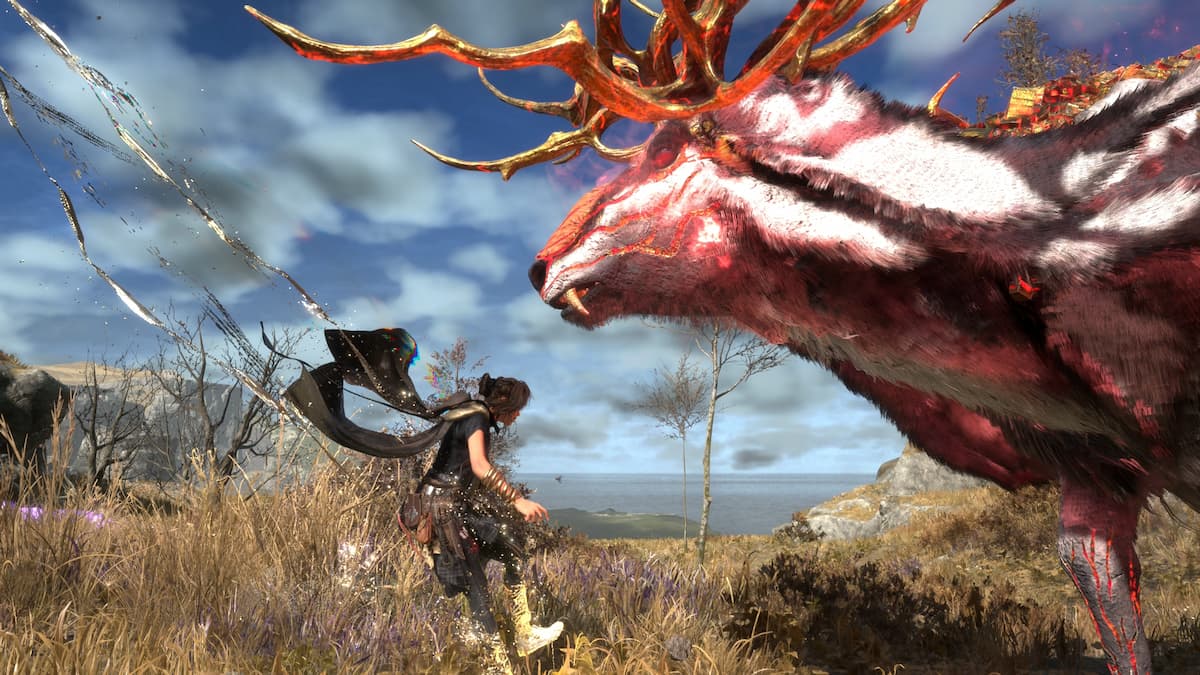 Forspoken’s open world is called Athia, and it’s jam-packed with secrets to uncover, gear to collect, and challenging enemies to hunt down. The Altered Llingoceros is a world boss that resembles a mighty stag. World bosses are mutated creatures, and they are dotted on the mini-map once you encounter them, as you’re often too weak to take one down the first time you see one. World bosses can be skipped entirely, but they’re always worth the effort if you can manage to take them down. This guide will explain how to beat the Altered Llingoceros world boss in Forspoken.

The Altered Llingoceros is resting on a hill near a refuge. Refuges will let you sleep, heal, and craft upgrades for Frey and her gear. Ensure you bring a full stock of healing items and your defense is upgraded significantly. This mutant is highly resilient to Frey’s Purple magic, so we suggest returning to fight this creature after you take out the boss of chapter five and earn fire magic. Once you have the power of fire, you can begin this battle in earnest.

As you can probably guess from the huge golden antlers, you must avoid standing in front of this creature as much as possible for this fight. Unlike the Altered Mylodon, this boss doesn’t have a second form or new attacks they use when their health gets low. This makes the battle easier if you can memorize its attack patterns. Llingoceros’s primary attack and biggest threat during this fight is its charge ability. It will stand up on its hind legs, then charge you with its golden antlers.

Running away from that move is unadvisable; even if the physical attack misses, it destroys the ground, and being in proximity to that destruction will cause a lot of damage to Frey. Use magic parkour to evade the creatures left or right and attack them from behind when it charges. With the Red Magic sword attack, you will deal considerable damage and prevent the animal from regenerating health. If you try to stand behind it too much, beware of a standing rear kick that can catch you by surprise.

Keep dodging the charge attack, and keep your attacks to this creature’s left and right sides to whittle it down. Red Magic, such as Crucible and Charge, to keep the boss trapped in a circle of flames will give your attacks a significant boost in strength. Proper use of fire, avoiding antler charge attacks, and staying on its flanks will lead you to victory.

Where to find Altered Llingoceros in Forspoken

This world boss is lurking around the grounds near the capital city of Cipal, and directly to the north of the Eastern Cipal Refuge.

Hunt down the Altered Llingoceros to earn hundreds of experience points, 15 Mana, and treasure chests containing a Feather. This will allow you to upgrade Frey’s carrying crafting materials capacity.