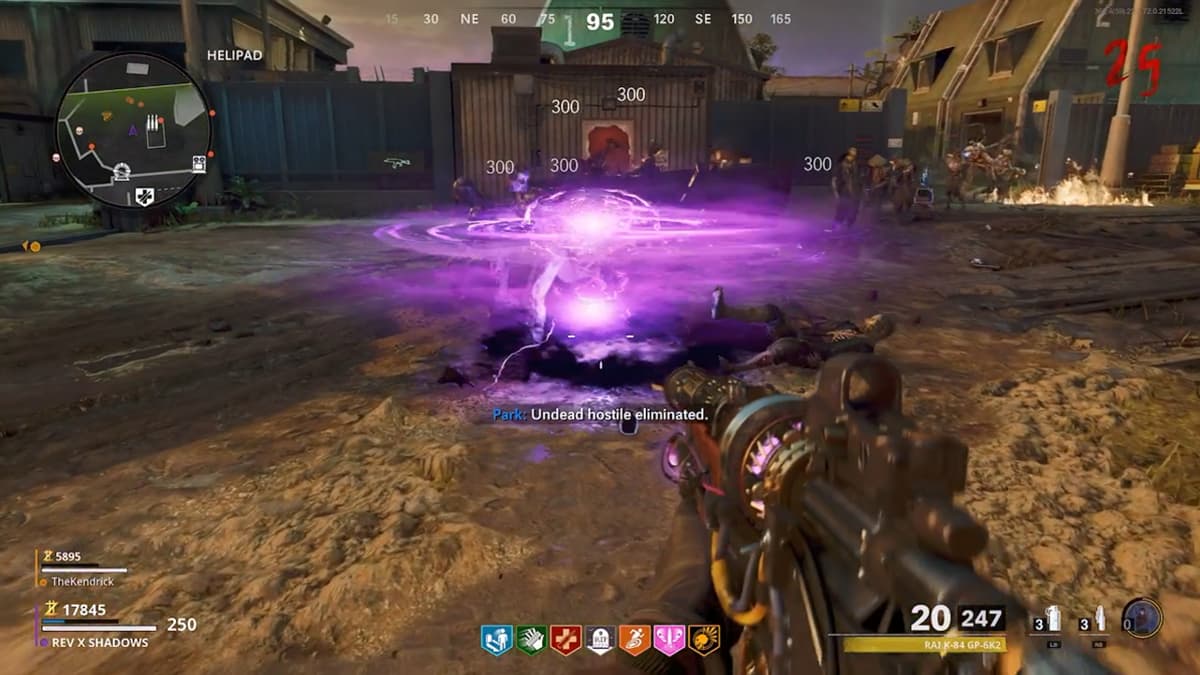 Call of Duty: Black Ops Cold War’s Zombie mode always makes a point to include enough powerful off-the-wall features for you to fight off the hordes of undead. Of the most iconic features are wonder weapons, the guns unique from all other weapons with their effects.

In Firebase Z, the wonder weapon is called the RAI-K84 and is a powerful tool to have in your arsenal. It has two firing modes; the first puts out beams that disintegrate enemies, while the second will slow and damage anyone walking through its area-of-effect. If you want to get your hands on the RAI-K84, you can get it in the mystery box or from the trial rewards, but there are steps you can go through to get one for free. Here is how to get the Firebase Z wonder weapon.

First, you need to turn on the power and activate the pack-a-punch machine. We have already covered this in another guide, so if you need help, be sure to check that out and come back here.

Get the wonder weapon blueprint and an eye

After power is on, go to the Weapon Lab from Motor Pool and grab the blueprint hanging on the wall. From here, make your way to Scorched Defense beyond Mission Control and find the charred body leaning against a tank on the right side path. Interact with it, and you will tear his eye out with your knife. When you do this, he will come alive, and in the animation, you will stab him in the head. When this is done, a batch of slow-moving zombies will pop out of the ground around him. There is nothing special about these guys; just kill them.

Get the Barrel Assembly

With the eye in your inventory, go back to Weapon Lab and interact with the computer to the right of where you grabbed the blueprint. It should say, “PROVE YOU ARE ME.” Interact with it to put the eye in the retinal scanner and open a drawer with a locker key in it. Grab it and go to the Barracks.

Throughout the two Barracks buildings are single lockers that you can open with the locker key. What you need to do, is keep opening them until a Mimic spawns. Kill the monstrosity, and it will drop the first part of the wonder weapon we need, the Barrel Assembly.

Get the Power Cell and charge it

You need to survive until about round 15 or 16, when the Manglers begin spawning (the armored zombies with the cannon). You need to keep killing them until they drop an Uncharged Power Cell. They are not guaranteed to drop them, so do not get discouraged when the first one doesn’t give you one. In one playthrough, we had to kill three to get one, and then the next time we played, we didn’t see a cell for three rounds.

When the game finally gives you a Power Cell, take it to the bench to the right of the Armory in the Weapon Lab. There is a charger you can place it in that will take a full round to charge. It will say you can pick it up after you put it in, but be sure not to do that. Leave it in the charger and pick it up once it turns gold and is named Charged Power Cell.

Now is the time for what is easily the most frustrating step in this process. Be sure you have a Pack-a-Punched weapon that you can control to fire one shot at a time. We recommend either an assault rifle, a sniper, or an LMG. Shotguns and SMGs will not work for this.

After you get the Barrel Assembly, you can interact with the computer you used before to make it begin showing an image of a circle with a radar spinning along it. It will stop in three different spaces, showing where you need to shoot a dartboard. Every time you play, this sequence will be randomized, but we will show our gameplay screenshots to try and help.

First, the dial will move clockwise. Count the beeps it makes from the top until it stops. In our game, it was 12.

Next, it will move counter-clockwise until it stops again. Count how many beeps. For us, it was six.

Finally, it will move clockwise again until it stops for good. We had 11 spaces.

You can interact with this computer as many times as you want to watch the pattern. It is much easier to manage with a friend holding a zombie for you, but in the end, it is doable solo.

When you have your pattern, take the teleporter back to the Courtyard where you begin the game, and enter the building with the Pack-a-Punch machine. Go into the Village Mess Hall to the left of PaP. The dartboard here is what we need to shoot.

Starting from the top, count clockwise along with the numbers until you reach the number you had in your pattern. For us, it was 12, so we fired one bullet into the 7.

From there, count going counter-clockwise to find your second number. Ours was six spots away, so we shoot into 10.

To finish up, count going clockwise now until you reach your third pattern spot. Since we had 11, our number to shoot was 9.

After you shoot your three spots, hit the bullseye, and a secret compartment will open and drop out the Aetherium Converter. If it doesn’t work, start over. Make sure you are only shooting one bullet into each spot and also that you are using a Pack-a-Punched weapon for it.

With those three weapons in your inventory, you can now build the RAI-K84 wonder weapon back in the Weapon Lab at the bench where you first grabbed the blueprint.

When using the weapon, there are two firing modes. The standard mode is very similar to the ray gun and disintegrates enemies. The alternate fire will put out a black hole like charge that will slow enemies within the radius. While the alternate fire does not do much damage on its own, switch back to the primary fire and shoot into the center of the charge and it will expand until it explodes. This shockwave can take out a large group of zombies, mimics, or manglers very quickly.

The gun can be put in the Pack-a-Punch machine three times like normal weapons, giving it even more firepower, but cannot have any elemental damage bonuses added like Brain Rot or Cryofreeze.