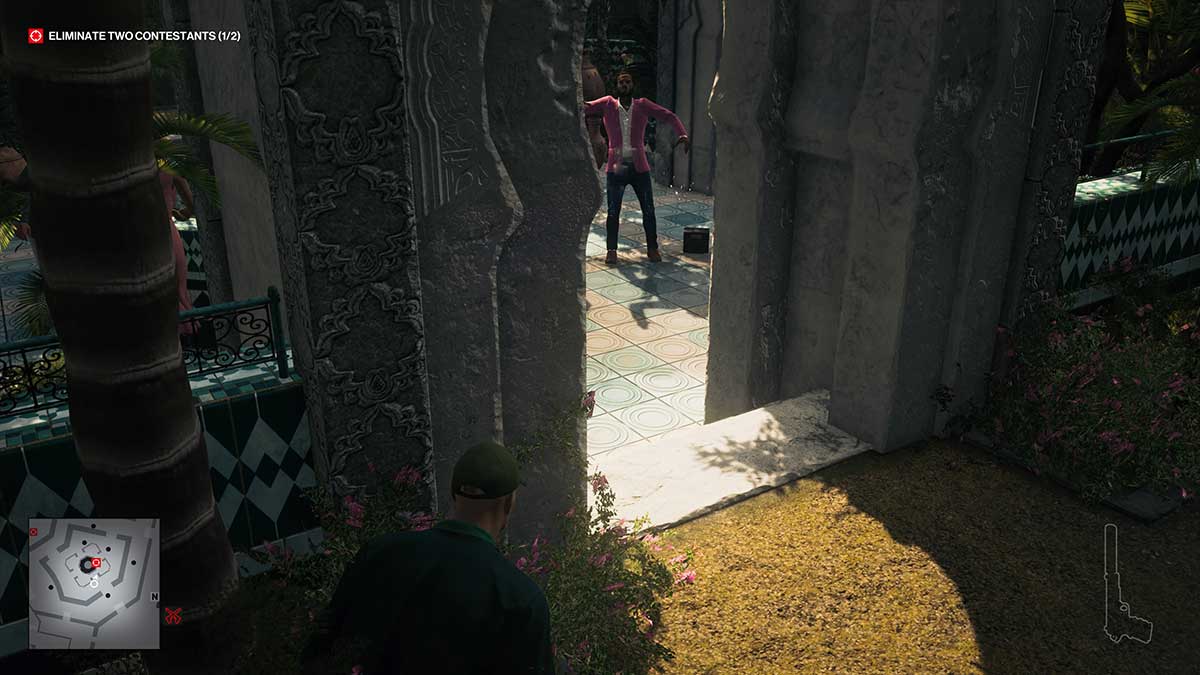 Hitman 3’s Dartmoor Garden Show mission adds a lot of new content to the game. In addition to the core repeatable Escalation with randomized targets, there are a few new challenges to master and complete. One of these new challenges is Danger! Danger!, which is much harder than it first seems. This guide covers a route through the Escalation that completes this challenge with relative ease.

To complete Danger! Danger! you need to execute five targets by electrocuting them. You only kill five targets throughout the entire Escalation, so this challenge requires you to electrocute them all.

While this route doesn’t require any special equipment, you need to have finished the base Escalation at least once. By doing so, you unlock Deterministic Mode, which allows you to kill any targets you like throughout a new run of the mission. Select Deterministic Mode as your starting location, and you’re good to go.

The first target you can kill via electrocution is by far the easiest. You’ll see Monon walking towards you if you run left from your starting location into the main event of the Dartmoor Garden Show. She’s wearing a black and white patterned dress. Follow that path and bump into her as you go. This will slow her down but isn’t essential. First, you need to get to the main stage and pick up the car battery behind it.

Below is a map reference for this car battery.

Now head to the starting location again. To the left of this area are some steps, at the bottom of which is a hosepipe. This is where Monon will stand when she comes here to smoke. Follow the hosepipe to the faucet and turn it on. Try to crouch in the bushes as you do to avoid unwanted attention.

Now, hide in the bushes to your left. From here, you should be able to see the target when she comes down to smoke. If she’s there when you turn on the faucet, it might trigger her to investigate and move back to the start of her patrol. Stick around here, though, because she’ll be back. When she does come back around, throw the car battery at her feet to electrocute her.

Your next target should be Evelyn Crane. The first thing you need to do is grab the gardener’s disguise. There’s a gardener fishing to the left of your starting location by the river. You can sneak up on him, subdue him, and grab the disguise without anyone noticing.

Below is a map reference for this gardener.

With this disguise on, you now need to acquire a screwdriver. There’s one at the back of the main event near the portable toilets on a bench.

Below is a map reference for this screwdriver.

With a screwdriver in hand, it’s time to head to the garden. It’s over to the left from this screwdriver at the top of the map. You’ll know Evelyn by her green dress. There’s also a large black metal structure in here that forms the kill you’re after.

Walk up to the faucet on this large metal structure and turn it on. This will draw Evelyn over to the puddle it makes. Once she’s standing in the puddle, sabotage the light to the left of her, and she’ll fry.

The way you need to electrocute Gulshan is a method we’ll use for another target, so learn it well the first time around. You need to pick up another car battery. Depending on which Level of Dartmoor Garden Show you’re on, you may need to use a secondary one to the one shown in the first kill in this guide. There’s another car battery over on the right-hand side of the mansion. It’s in some crates near all the vans.

Below is a map reference for this car battery.

Now run to Gulshan’s garden. It’s the one with a tiled fountain and a sheesha pipe. You’ll notice a hosepipe near the fountain that leads to the garden’s edge. Turn it on and wait for someone to turn it off again. Now you just need to wait out of sight of everyone else in the garden for Gulshan to come and stand in the puddle. He does this along his patrol. When he’s standing in it, throw the car battery and electrocute him.

Killing Sato is something you can set up as soon as you’re into Level 3 of this mission. First, you need a housekeeper disguise. Come to the back of the event where the portable toilets are. You’ll notice a housekeeper coming back here and smoking at the steps at the very edge of the hedge maze.

Flip a coin to distract the housekeeper into the bushes before subduing him and taking his disguise. Now you need to head to the starting location and find the white van nearby. Inside it, there’s a microphone that you need to pick up for this kill.

Below is a map reference for this van.

Now you need to go to the stage in the center of the event. Get on stage and turn the voltage up on the microphone. Then, swap the microphone for the one you just picked up. As soon as Sato touches it, he’ll die. You can leave as soon as you’ve swapped the microphones because this kill will happen naturally as Sato goes about his routine.

Cornelia can be killed in the same way we outlined for Gulshan earlier in this guide. Use the fountain hosepipe and a car battery to electrocute her in exactly the same way. This will mark your fifth electrocution, completing the mission and the challenge at once.