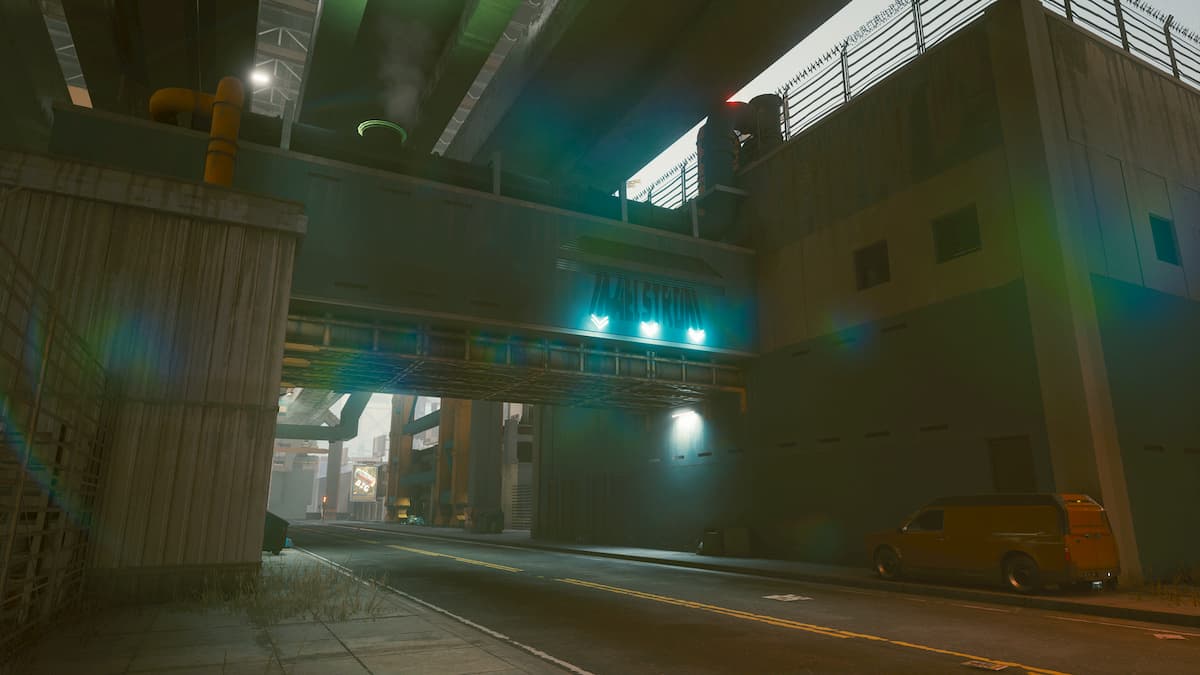 Not everything has a happy ending, and in Cyberpunk 2077, there are plenty of dark storylines that you’ll encounter. Just because some stories don’t end happily doesn’t mean someone can’t get revenge. In the Dirty Biz gig, you’ll be hired by a father to steal a raw BD clip of their son being murdered. If you obtain it, you can give the kid justice and see their killers put away for their crimes.

The location you need to find to start the gig is in Shipyard Way. You can find it on the west part of Northside, right before you overlap over into Arasaka Waterfront.

How to sneak into Gottfrid and Fredrik’s Studio

When you reach this area, you’ll receive the notification about the gig, and you need to find the entrance of the studio of the two people who have the raw BD track, Gottfrid, and Fredrik. Their studio is locked tight, so going through the front entrance is probably the worst idea. What you can do is go to the right of the guards, and there should be a blue crate with an orange one on top of it. All you need to do is climb up it and hop the fence, and then you’ll be inside.

When you arrive inside, multiple cameras and guards are walking around. The guards at the front entrance are still a problem, too, so keep them in mind. We were able to breach the central camera, and then we shut down all of the cameras in the immediate area. If you can’t do that, take control of the central camera that’s overlooking the complex, and shut them down, one by one, freeing you up to use them as you will without the dangers of them catching you, alerting the guards.

Once you have all the cameras shut down, your next strategy is to ping the guards and receive their locations. There are the two guards at the front entrance to worry about, multiple on the second floor of the roof, and two more on the highest roof. One of those on the highest roof is a sniper, so they’ll spot a majority of things.

After pinging everything, hug the complex’s right side and walk over the red crate adjacent to the stairwell. There should be a truck there, too. Control the camera above you and activate the generators on the second floor to distract the guards up there. They’ll both be pulled to different parts of the roof. Pick one, grab them and take care of them, and hide the body. We recommend the guard closest to the roof’s left side because that leads to the inside of the building, so it’s easier and closer to your target.

However you handle the two guards on the roof, make your way into the left side of it, and you’ll enter the building. There’s an enemy in here, in the far back, that you can take out quietly without too much effort. Once they’re out of the way, proceed to the next floor upstairs. Continue to the left, and go down the hall. You’ll enter the room where Gottfrid and Fredrik are watching recordings. When you enter the room, they break out of it and tell you where to find the BD. Once you have it, you have the option to leave, no problems. However, you also have the option to take these characters out. If you do, Gottfrid has a shard on them that give a bit more light to how bad of a person they were.

Once you have the BD, all you have to do is leave the area. You need to place the BD in a dropbox nearby, which is highlighted on your journal’s navigation point.