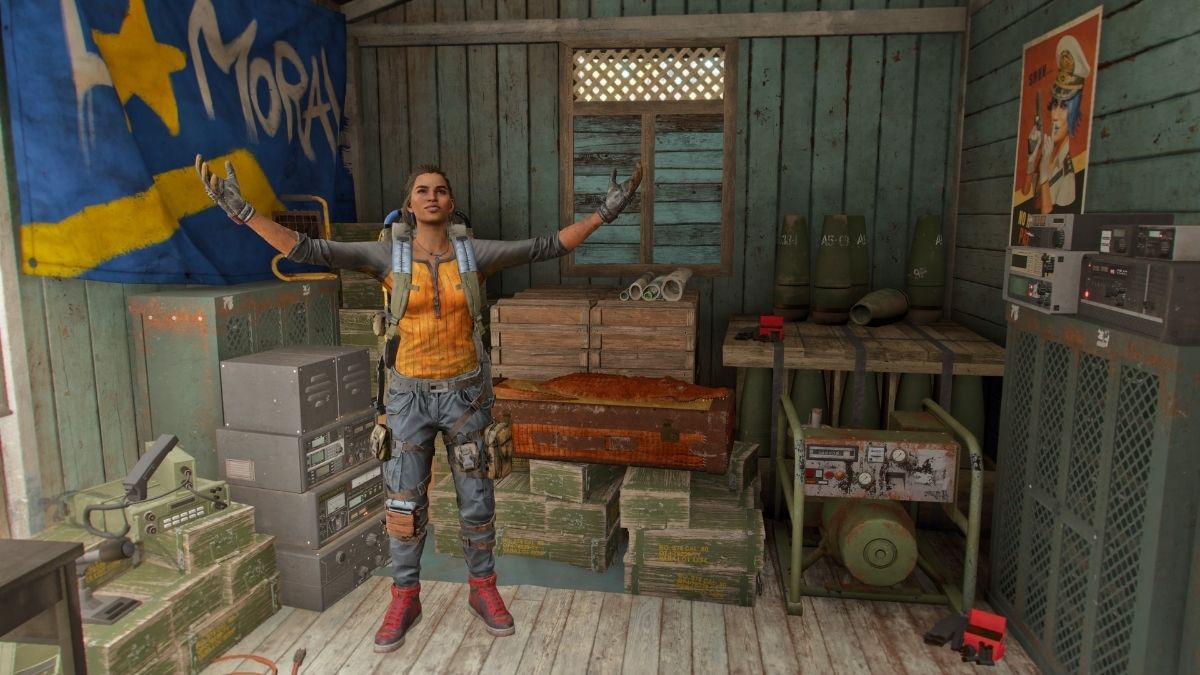 Treasure hunts are a common occurrence in Far Cry games. Far Cry 6 has a ton of them. If you’ve been exploring the Sierra Perdida area of the map, you may have come across the Rising Tide treasure hunt. Here is how you complete it.

To find the Rising tide treasure hunt, you will first need to travel to the southern part of Sierra Perdida. Here you will find a small town called Yarabi. Check the map image below for the location.

Once here, locate the building on the water’s edge with the yellow door. The building itself is blue. You will find an orange box next to the door that contains the puzzle information in the image below.

As the note says, the secret is hidden with the boats. There are plenty of boats in the area, but only five of them matter. These five are all named after the ‘legends.’ When you go inside the house, you will find five buttons scattered about, each with the name of one of the legends next to it. First, you need to know the order to press them. That is where the boats come in.

Head out front of the building to find the purple boat named after El Tigre. It’s hard to miss. On top of the water tank next to it is a sign with the number one on it.

Go behind the building and dive into the water to find the next boat. This one is named after Roja Victoria. Be careful of the Bull Sharks and Barracudas swimming around the area. If you have Guapo, he can easily handle them for you.

Head back to the house and walk along the dock to the right of it. From the dock, jump over and climb onto the roof of the dock house with the blue shutters and door. There is a zipline on the roof that leads to the third boat. This one is named after Papi Chulo.

Head back to the house again and turn to face away from it. Take the path between the green and white houses. There is a blue shed behind the green-colored house with the fourth boat on top of it, named after Clarita.

Head back to the main house one last time and turn to the left. Follow the road, and you will see a blue boat on top of a blue house on a small hill. This boat is named after El Lucky.

Once you have found all four boats and discovered the order in which they should be placed, head back to the main house and go inside. Hit the buttons in the correct order based on the numbers next to each boat. The correct order is:

After all the buttons have been hit in the correct order, the door in the house will open, and you will be able to claim your treasure.