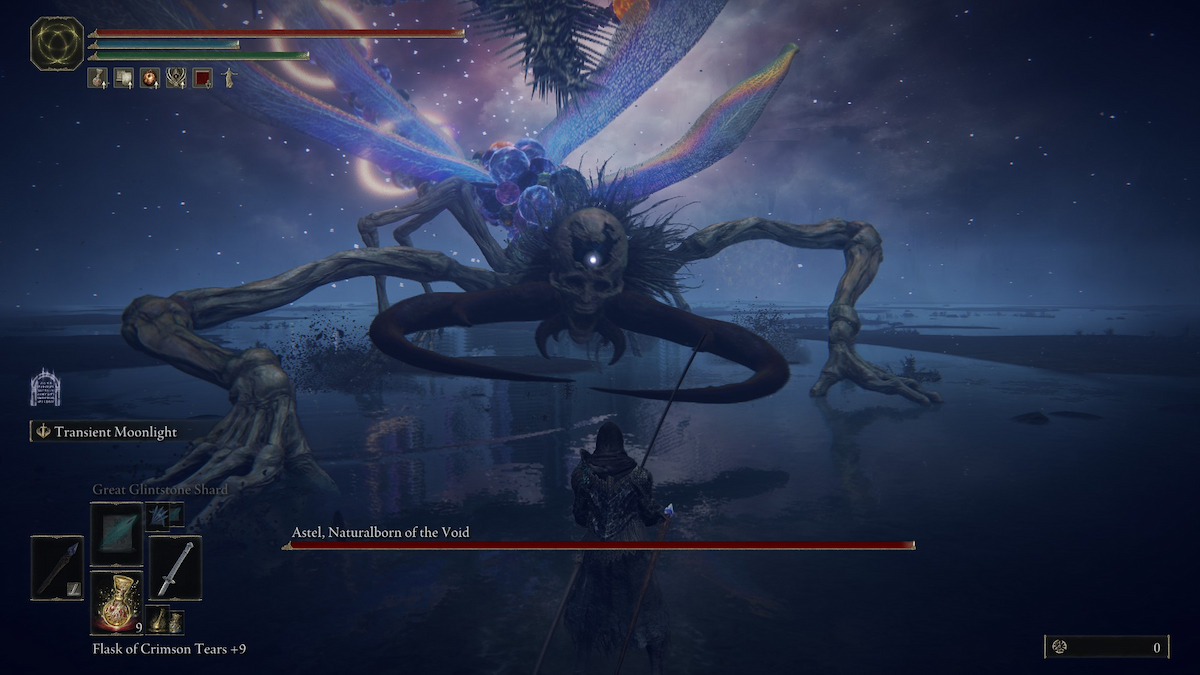 The final required boss in Ranni’s questline in Elden Ring, Astel, Naturalborn of the Void, is one of the most bizarre boss designs in the game, with a moveset to match. Very few of its attacks have traditional dodge timings, even by Elden Ring’s standards, and the boss is fond of teleporting around the arena at a moment’s notice, usually off-screen. Defeating this strange beast requires patience, good camerawork, and a hefty dose of as much damage as you can dish out.

Astel, Naturalborn of the Void Attacks

Astel always opens with a long-range laser attack. It will charge purple energy in its mouth for about three seconds, then instantly send the beam across the entire arena. As you approach, it will do two tail slams, the first of which you’ll need to roll. Use the tail’s whiplash to guide your dodge timing: it moves in a sin wave pattern, and the closer slam will hit first, followed by the farther slam.

Once you’re within melee range, Astel has several attacks to look out for. As long as you’re in front of its head, the primary attack will be a double bite with its mandibles—dodge directly into the head to avoid that. If Astel empowers its mandibles with purple energy, you can back up to avoid the single, stronger bite.

If Astel pulls back and raises its arms, dodge into it to avoid the curve of purple exploding mist. Be careful not to get hit by the arm swing. Astel can also put its hands together in a diamond shape and raise them above the floor. If it does so, run away as when it slams its hands down, it will create three successively larger rings on the ground that explode if they touch you.

If Astel raises its head into the sky and clicks its mandibles, it’s about to create an upward-moving gravity wave that will lift you and a bunch of rocks into the air before slamming everything into the ground. You can either run out of the attack radius or dodge at the last second to avoid this attack. Don’t be in the radius when the rocks drop, as they will also do damage.

Astel won’t stick around to attack you endlessly. If it starts to form a huge ball of star energy around itself, it’s teleporting away. At the end of the initial teleport is an explosion you’ll need to avoid. Before it reaches 50% health, the teleport comes in two varieties. The first relocates the boss to the other end of the arena for more lasers. The second usually puts it behind you, where Astel will try to grab with its mandibles. When it teleports, always check behind you, and dodge away from the boss as the grab occurs to avoid becoming a snack.

Once Astel reaches 50% health, it will teleport away. When it reappears, it will summon several dozen meteors from deep space. You can spam roll in either direction to avoid most of these, as many of them won’t be headed in your direction. You can also reaction roll based on which ones are closest to you.

Successfully deal with all those attacks and do damage as you can to Astel’s head and upper body, and it will fall in due time. You’ll be rewarded with 80,000 runes and the Remembrance of the Naturalborne, which can create both the Bastard’s Stars flail and the Waves of Darkness Ash of War.