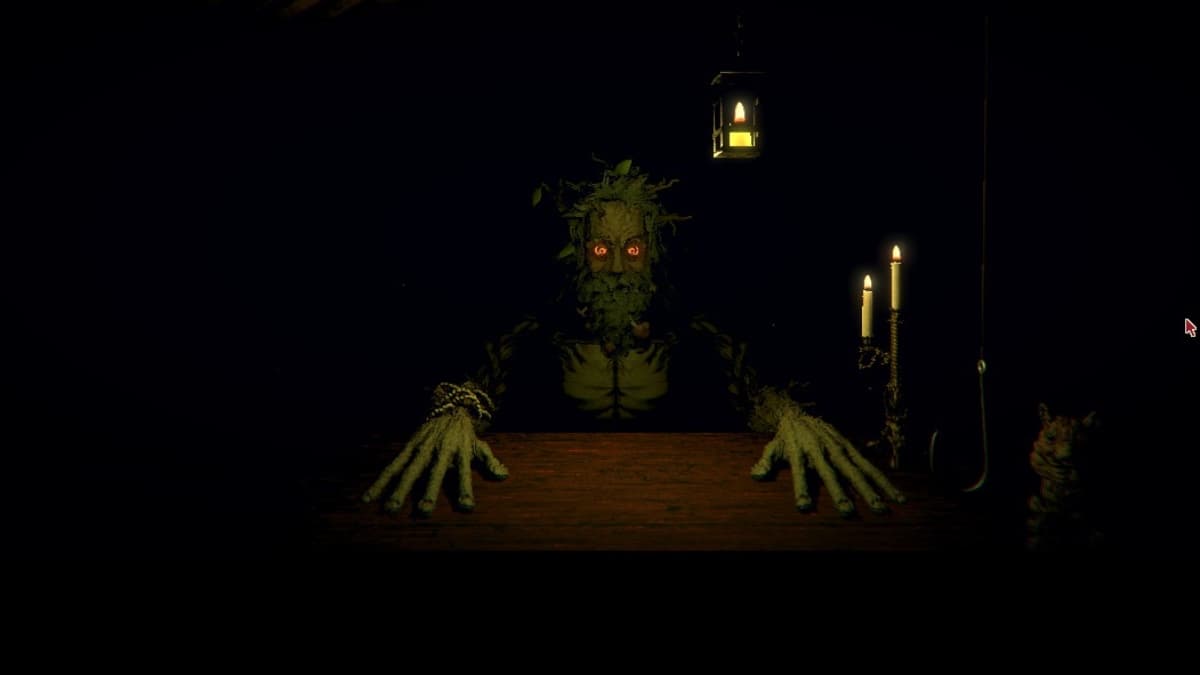 After besting the Prospector, Angler, and Trapper, there is only one boss left to defeat in Act 1; the card dealer himself, Leshy. It’s an opportunity for revenge since he’s spent most of the game mocking your failures and immortalizing them as Death Cards. Even though these cards prove incredibly useful on subsequent runs, it’s still not a very nice thing to do. So, it’s payback time.

Preparing for the final battle

By this point in the game, you should have completed the numerous puzzles in the cabin, which will put you in a good spot for the last boss of Act 1. As you progress through the map, once again, look out for the Woodcarver so you can obtain the Hoarder totem bottom to pair with your squirrel topper.

Simultaneously, look for opportunities to boost the power of your cards with additional sigils, health, and attack power by stopping at the Sacrificial Alters and Campfires. Ideally, you will find a powerful Death Card to invest in, but any low-cost card can work. Finally, hold onto the Stinkbug or another card with the Stinky sigil as it will make defeating Leshy’s final stage a non-event.

Before the last battle begins, you have to walk up to the cabin, and along the way, you can pick up some useful buffs if you can pass a few checks. For the first, choose the card type that you know is most prominent in your deck. If you’re successful, you can pick one of three Boons. They’re all useful in their own right, but the Boon of the Bone Lord is likely the best choice.

You will then need to pass another check. However, this one is a guaranteed win, so long as you have completed the cuckoo clock puzzle. Choose the Ring card and then pick your second Boon. Again, they’re all useful. Just make sure it compliments your deck.

Unlike the previous bosses, Leshy has three phases to battle through. During the first stage, he will cycle between wearing the Prospector, Angler, and Trapper masks to use their abilities. However, if you’ve prepared appropriately, you will be able to easily play a card that can deal enough damage in one turn to start the next stage.

The past comes back to haunt you

In the second phase, Leshy will summon a bunch of the Death Cards you have created after lost runs to fight against you. Now, if you have created some powerful cards, this part of the battle can be tricky. However, if you spent the entirety of your current run buffing cards, you should be able to overpower them. Leshy will also continue to cycle between the masks of previous bosses, so look to quickly beat the second phase to avoid losing your best cards. Although, if you’ve held onto a card with the Stinky sigil, it won’t be an issue. It will just take longer.

For the final part of the battle, Leshy turns the Moon itself into a gargantuan card that fills up his entire side of the board. It boasts three sigils, one attack, and a staggering 40 health. The three sigils are Mighty Leap, Moon Strike, and Tidal Lock. The first prevents you from attacking Leshy directly with Airborne monsters, whilst Moon Strike allows the card to attack each of your spaces. Finally, Tidal Lock will eliminate any of your small creatures, like squirrels.

It casts an intimidating shadow, but it has one easy to exploit weakness. If you play a card with the Stinky sigil, the Moon’s attack will be reduced to zero, making it nothing more than a giant health bar to whittle down over as many turns as it takes. Leshy will bemoan your tactic, but there’s nothing he can do. Keep attacking until the Moon’s health hits zero and then attack directly once it’s gone.

You have now defeated Leshy, the final boss of Act 1. It is a visually spectacular climax to the first Act, but not a particularly difficult task if you prepare vigilantly. From here, you will move on to Act 2, which provides an entirely new set of challenges and mechanics.