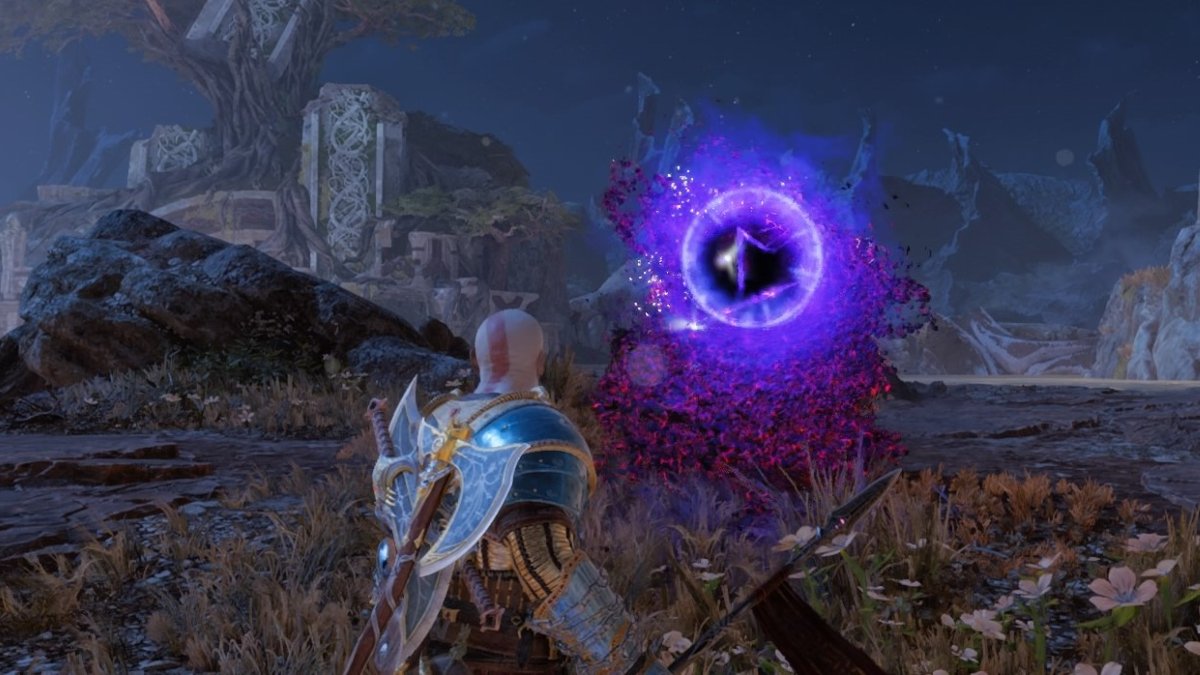 God of War has a variety of optional bosses for Kratos to take on across the Nine Realms. One type of boss he will encounter is the Flame Phantom, a singled-eye magical enemy. You will encounter one of these during the side quest ‘Nocturnal Predator.’ This one is found in The Crater, a secret location at Vanaheim. Here is how you can defeat The Flame Phantom at The Crater in God of War Ragnarok.

Related: How to defeat The Crimson Dread in God of War Ragnarok

The first thing you will need to know is that The Flame Phantom is a moving creature with a single runic eye. Hence, its weak point will always be that runic eye and the glowing pillars; you will need to target that. Any weapon is suitable for this boss, but the Draupnir Spear does seem to do more damage and is useful in this fight especially. The Crater is a big area; as such, you can play with the Flame Phantom a bit by damaging it from long-range, which is where the Draupnir Spear comes in handy. This large area puts the encounter in Kratos’ favor, as you can choose specific combos of long-range attacks.

The trick to weakening the Flame Phantom is filling up its stun meter. When it is completely stunned, it will fall and retreat later on. When it is down, use your light and heavy runic attacks to cause some serious damage to it. After it retreats, you will have to attack the glowing pillars which are protecting it. These pillars are located across different places near the area of the encounter. For example, one is located near the area where the encounter starts, and one is on the other side of the river. So, you will have to pick them out with the Draupnir Spear carefully, as there is a short window before the Flame Phantom returns.

The Flame Phantom goes for swiping attacks which can be dodged or parried. Try to parry with the shield and then go all in with the light and heavy runic attacks. These will do significant damage to the Flame Phantom and weaken it. During this time, use your companion’s arrows as well. The Spartan Rage isn’t that useful with The Flame Phantom, as it moves very quickly and isn’t fixed in a single location.

It also goes for linear fire attacks, which cannot be blocked. So, better stay out of its range during this. When it does that, go for long-range attacks with the Draupnir Spear or Leviathan Axe. Adding to that, the arrows will work by causing a bit of damage.

Another type of fire attack The Flame Phantom goes for is an area-wide attack. This is probably the most dangerous attack this Flame Phantom can do, as it does a lot of damage to Kratos. Whenever it tries to go for this attack, try to attack its runic eye rapidly to make sure it doesn’t do that. If it does do that, make sure you aren’t in the affected area, as you will get burning damage.

The Flame Phantom will come and go when it gets damaged too much. So, look out for the glowing pillars protecting it and destroy them. These take huge chunks of the health of this boss and weakness it severely. Then keep performing the light and heavy attacks with the arrows as a backup.

Continue with the methods above, and The Flame Phantom’s health will be completely depleted. Then use the Finisher to finally defeat it. The reward for defeating it is Gale Flame, used for upgrading the Draupnir Spear and Hunter’s Brand, used to craft the Hunter’s Armor. After defeating it, the ‘Nocturnal Predator’ side quest will be completed.