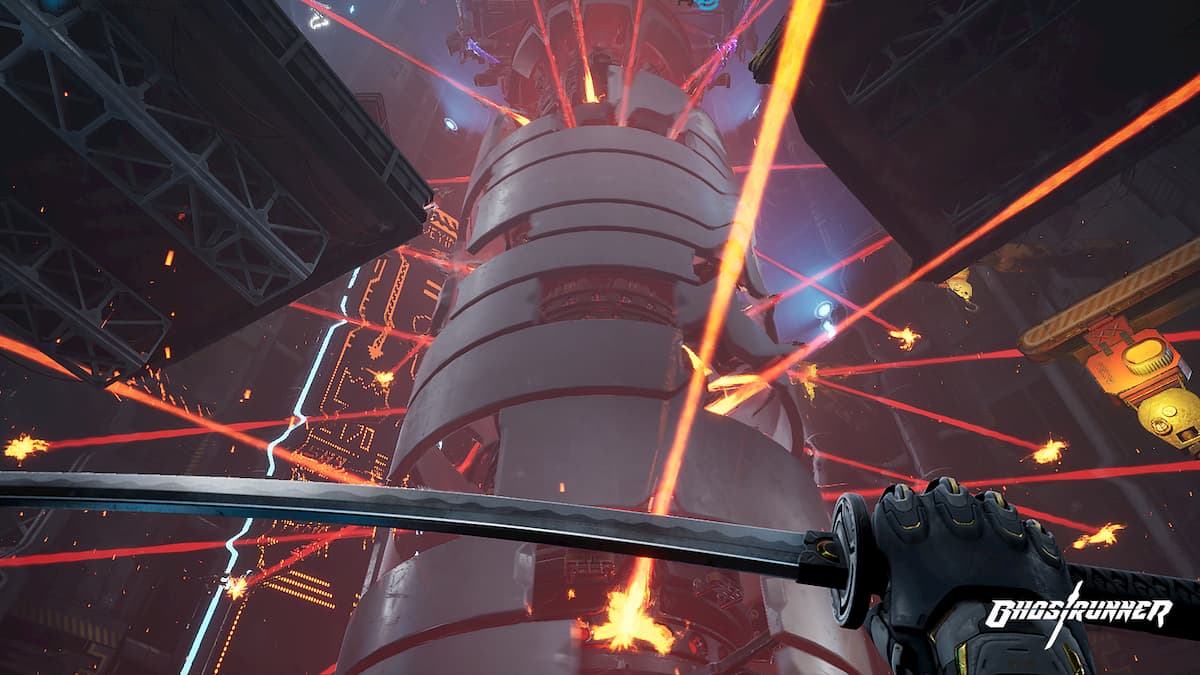 The T-037M or the TOM boss fight is undoubtedly the most challenging segment in Ghostrunner. If you are not well acquainted with the traversal mechanics in the game by now, then this segment can get quite tricky as it solely relies on that. It can take several tries to get the hang of the laser pattern, which the TOM boss emits, but even knowing that makes little difference to the difficulty level of the segment.

As soon as the level starts off, jump off the platform, and grapple to the nearest hook. You need to grapple to three hooks successively without landing on any platform. Do not dash as it might get your timing off, and you might end up getting hit by a laser beam.

Once you grapple thrice, you will land on a platform. Wait for the laser beam just above your head to pass and quickly grapple on to the next hook. You need to dash here to get past the laser beam just in front of you and then jump immediately after landing to avoid the incoming laser beam.

Quickly grapple on to the next hook after that, and on this platform, you need to jump thrice to avoid three of the incoming lasers beams. Once they pass, you can quickly grapple twice and reach the next platform.

Once again, you need to grapple twice again to the next platform without any delay at all. Make sure you hover around a bit in the air, so you don’t land on any laser beam. You can catch a breath on this platform since this the last one; however, make sure to jump and crouch on alternate laser beams.

Once you have an opening, grapple twice to reach the top of the tower. You just need to hit the attack button to take out one of the weak parts of the boss. After you do that, you will fall down.

You need to climb back above, and the boss will emit a wave of attacks to prevent you from climbing seamlessly. Wait for one of the wave attacks to pass the scratched wall, and quickly grapple onto the hook. As soon as you land on the wall, jump immediately. Wait for the wave attack to pass the next wall again and grapple to the hook. Jump again as soon as you land to reach the next platform.

The next segment gets trickier as you need to jump on the same wall twice. Grapple to the wall and keep wall-running until the wave attack is about to hit you, then quickly jump back to the wall again and grapple to the next hook after wall running a bit. You will have to repeat this twice, and you will reach the next platform.

The final segment is quite easy, as you just need to keep grappling until you reach the base again. There are some segments where you need to wall run, so be wary of the wave attacks before jumping.

Once you reach the base, grapple once to reach a platform. Unlike the previous segment, you need to be very patient since the laser beams come three at a time so you can avoid them easily. However, do keep in mind that you need to jump first, then crouch, and then jump again to avoid the three beams. Once you pass the three beams, jump to the next platform by grappling twice.

The same strategy can be used for the next platform as well, but you need to crouch twice and jump once here in this part. After that, you need to grapple to the wall and avoid the wave attacks, as you did previously. Make wise use of the Dash ability, and you should be able to get through. You will reach a platform after which you can keep grappling to reach the top again and take down another weak part of the boss. You will fall down again after that.

This is the last segment of the fight and, unsurprisingly, the hardest. The trick here is to move diagonally towards the center and slide to avoid the lasers. You can slide by pressing the crouch button and moving left. The wave attacks can be evaded by simply jumping. Stay on the move at all times to avoid getting hit.

Once you reach the center part, hit the blue highlighted part. You will be pushed back to the edge, and you need to move diagonally all over again to take out the last weak part. This can be done in a similar fashion as the previous one, but you just need to move in the opposite direction. Hit the blue part again once you reach the center. You will be pushed back once again.

Grapple to the hook and then to the top of the boss after avoiding the lasers. Hit it one last time, and it will finally be defeated. Board the elevator to proceed to the next level.