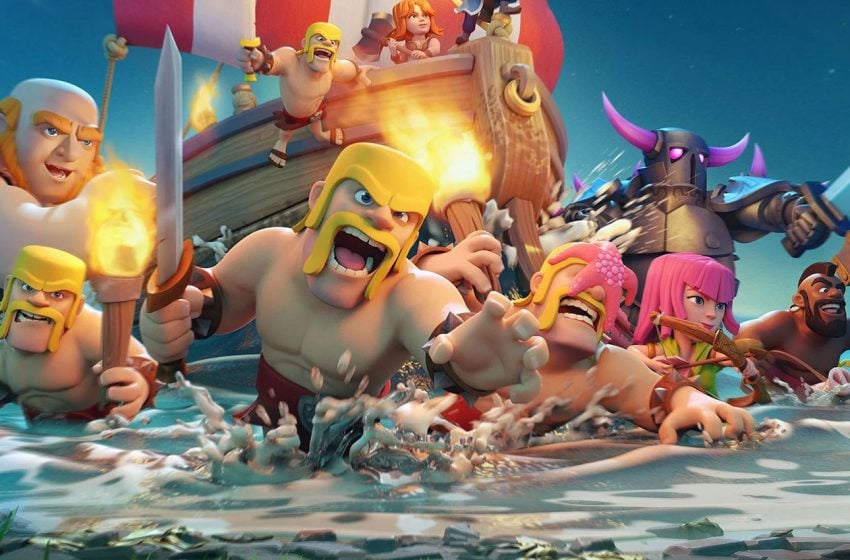 The main content of Clash of Clans revolves around the attack versus defense fighting system based on village timers, meaning that you are not attacking at the same time as defending your base.

However, the Builder Base content, accessed by using the boat at the bottom ocean area, works differently. You build your base in a similar way to your regular village, but when you start a battle against another player, after picking the troops you wish you use, you compete against each other in real-time to see who can earn the most stars whilst doing as much damage as possible.

While the main village battles start relatively easy to beat and get more different to destroy 100% as you battle town halls at higher levels, builder base village battles are fairly difficult throughout to destroy an opposing village completely without a smart troop loadout based on the layout and a lot of luck.

It’s important to note that there is no perfect solution. There is not a one size fits all answer to a base layout and no single base layout that is better than the rest.

Thankfully, there are some tactical placements and tips that can help you to maximize the level of protection you can give to your most valuable buildings and hopefully increase your wins.

Batten down your builder hall

Much like the town hall in the main village, destroying it will give the attacking player a star for their efforts. Placing this in an easy to destroy position can be useful in those battles as it’s an easy way to contribute to the 30% destruction threshold without giving away more trophies. Most players looking for easy trophies will attack them to ensure a win, and hitting 30% damage will give you, the defender, a 12-hour shield from more attacks. It’s a fairly common tactic to avoid losing too many resources whilst receiving a shield from further attacks.

However, in the builder base battles, there is no need to protect the village in this way as combat is PvP initiated by the player, and resources will not be affected. This means that protecting your builder hall is of the utmost importance, and placing it around all of your walls and with defenses will give you the best chance of survival.

Typically, the troops that are the best for rushing through builder bases are units that do splash damage, so make sure that your defenses are spread out enough to negate their potency, giving you the best opportunity to survive. It will not work in every situation, but with enough variety in defense for both air and ground troops around the base, you can take care of most threats as well as swiftly take down the enemy battle machine.

While there will be a temptation to spread out your buildings to force your opponent to move around more, the time element is typically not a big factor unless you both destroy the exact same percentage of the base, which is rare, and simply gives the opponent easy destruction points.

It’s not necessarily a great strategy in main village battles as spells and high damage splash troops can wreak havoc on your buildings and defenses, but if done correctly in the builder base, you can make everything in range of attack.

Instead, try to get your buildings as cozy as you can and with some smart placing of defenses, every troop that the enemy deploys can be in the range of attack. There’s typically not enough wall tiles to cover around your village more than once, but you can design it so that there’s no ideal point to attack. If players you face are deploying troops in the same area every time to good effect, move defenses around to create a deterrent, and results should improve.

Lead a lamb to slaughter

One of the best defensive buildings for taking out ground troops is the crusher. It’s the giant hammer that slams on the floor with all troops close to it, taking huge damage. It’s a one-hit kill for everything other than the battle machine and giants. Giants are far less effective in the builder village battles than the main village ones, so you won’t find players using them as often.

Placing the crusher in a position that means any ground troops must go through it will make the game much harder for your opponent. It can also force them to use more air troops, which is good for you as they are overall more punishing than ground ones and will take out enemy forces easier, all indirectly because of good crusher placement.

There will be a temptation to create a funnel system that will encourage opponents to place their troops to go through a certain entrance. This is typically an easy route to the valuable buildings to entice opponents in, but then laden with traps. This can be effective in the main village because the rest of the base is big enough to recover if the strategy doesn’t work. Not so here as you get a smaller number of traps to work with, and the opponent can still sacrifice a solo troop to set them all off.

Instead, work on placing bombs and spring traps in unpredictable locations and away from other traps to avoid setting lots off at once. This will punish those players that look to split defenses against other troops and avoid all of your bombs going off to a troop used as bait for them.

Walls are important. They are there to offer the first layer of protection to your village, and unlike in the main village town hall, they are much better at offering stopping enemies because of the limitation on the army sizes. That means that it’s much less valuable to use wall breakers to take them down, so unless players waste their battle machine on taking a wall down, they are more valuable here.

As such, upgrading them is more important in the builder base than in the main village base. It’s also cheaper to upgrade them, so making sure they are in good shape is easy, much more so than the main village walls. This will then give your defense more time to eliminate the enemy troops.