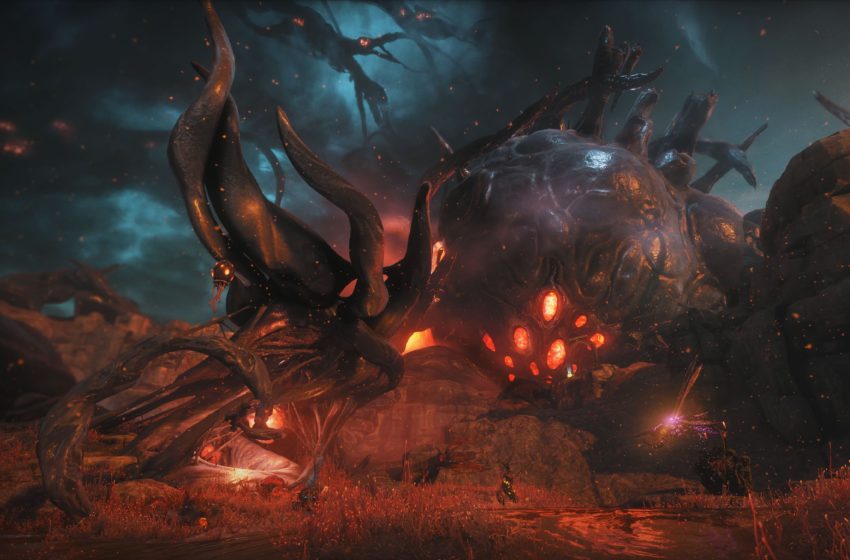 Necramechs were introduced to Warframe in the Heart of Deimos update and present a considerable challenge for some players to take out. These mechanical monsters patrol the Isolation Vaults, and upon death will drop important resources that allow players to build their own Necramech.

The most important thing about any boss fight in Warframe is understanding the mechanics. Screen readability is sometimes an issue, so understanding what is actually happening is the first step to victory.

Necramechs are practically immune to all incoming damage except in a couple of weak spots. The only place you can hurt them is at their shoulders and the blue scar on their back. If you do enough damage to each shoulder, you will break off the arm, reducing the Necramech’s ability to put out damage. After that, it is just a matter of working over the blue scar weak point until it is dead.

This is where punch through comes in. Weapons with punch-through will pass through an object, hitting the object behind it. This means you can shoot a Necramech in the chest, and the shot will pass through the body and impact the blue scar on the back.

It is also important to know when to stop attacking. Necramech’s have an ability called Storm Shroud which will function in much the same way as Iron Skin for Rhino. It will absorb incoming damage, then turn it into a barrier. The barrier itself will deflect the damage. When Storm Shroud is active, you should stop doing close range damage and move to somewhere safe before stripping away the barrier.

What kind of weapons to use

We have already covered the importance of punch through, and it is here that we should mention the Stropha. A Stropha built for heavy attacks will punch right through the chest of Necramech and one-shot it, depending on the build and how much of a combo meter you manage to build before unleashing the heavy attack. If you can build enough damage, then release it as a heavy attack into the shoulder weak spot, the damage will carry through to the main health pool and obliterate it.

The reason the Stropha works so well here is that the Necramech has a scaling damage resistance based on incoming damage, except for incoming critical hits. The Stropha can be built for high critical damage, strong heavy attacks, and then unleashed on the Necramech by getting in its face.

Hard-hitting sniper rifles will also be effective, although less useful during the rest of the Vault run. Weapons should ideally be modded for Radiation, Blast, and Impact to take advantage of his armor and shield makeup.

Finally, a common option that many players speak highly off is the Kuva Nukor. We have not yet had time to test this ourselves, however.

Which Warframe to use

There are lots of suitable Warframes to take out the Necramechs. Chroma can do intense damage, while Harrow can strip away his Storm Shield with ease. Wukong can utilize Defy to survive the Necramech’s damage output, then do extreme damage in return with the right build.

Our personal favorite is an Assimilate Nyx with a Stropha. Just building your combo meter off lesser enemies, use your fourth ability to completely ignore any damage the Necramech can do, then one shot it in a weak point. Nyx can also apply a debuff to the Necramech using her second ability, increasing the damage it takes.

The most important thing to remember is that just because you run into a challenge with you preferred build does not mean the challenge is insurmountable. Warframe is a game of options and experimentation, so don’t be afraid to try new things.