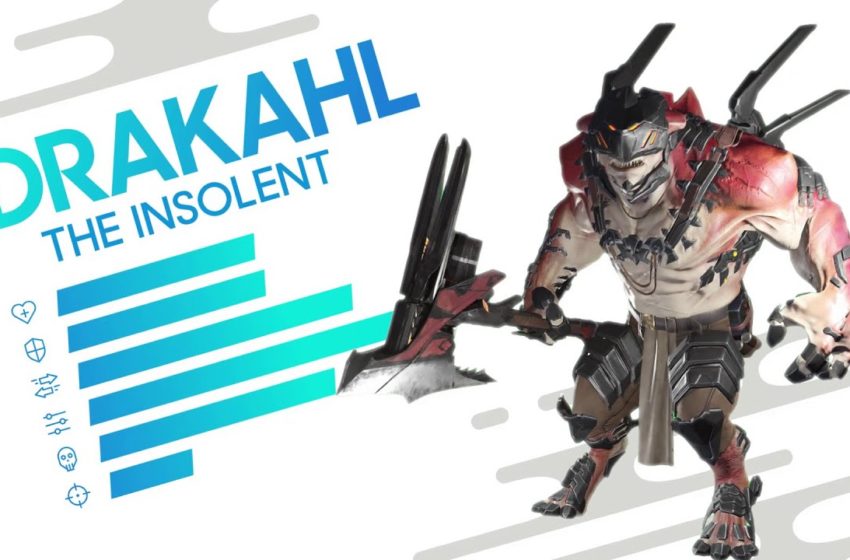 Drakahl is one of ten playable heroes in Crucible. He is the most deadly species, known for being a violent, bloodthirsty people. His warlords regularly dispatch him to create as most chaos as possible. Here is how to play Drakahl in-game.

Drakahl is a melee centric character. He swings around an Axe that deals big chunks of damage to anyone close enough.

Drakahl has two movement abilities key for closing the gap between you and the enemy. Jink is his passive. When in the air, press the spacebar to get a quick boost forward. His shift ability is Rush, which lets him dash in the direction he is facing.

Pressing Q brings up Enraged, which has two forms. Left-clicking is a claw attack that will heal yourself when dealing damage, and Right-clicking is a grab that will pull an enemy towards you.

His E ability is Resonating Axe, and it also has two forms. Left-clicking is a spinning attack that will make enemies bleed. Right-clicking has him slam his Axe on the ground that will stun and damage nearby enemies.

Finally, his right-click ability is Sonic Pulse. With this, he fires a projectile at enemies.

Drakahl’s essence upgrades revolve around his abilities and health.

At level one, you can choose between your main attack reducing the cooldown of rush by one second for each hit landing, main attacking inflicting damage over time on targets below half health, or melee, which causes vulnerability for three seconds.

At level two, 25% of damage you take is applied over time rather than immediately.

At level three, you get an extra 15% when below half health, detect targets with damage over time within 80 meters, or Sonic Pulse destroys enemy projectiles.

At level four, damage will not interrupt when you are healing with a medkit.

At level five, Enraged makes you invulnerable for one and a half seconds, or Sonic Pulse will slow enemies by 25% for three seconds.

Being a melee character, you want to use Drakahl to get close to enemies to deal as much damage as possible. Be sure to use Jink and Rush to move as fast as possible. When close, wail on the enemy with your Axe while balancing use between Enraged and Resonating Axe.

Be sure to avoid range enemies until you can get in close without them properly shooting you.