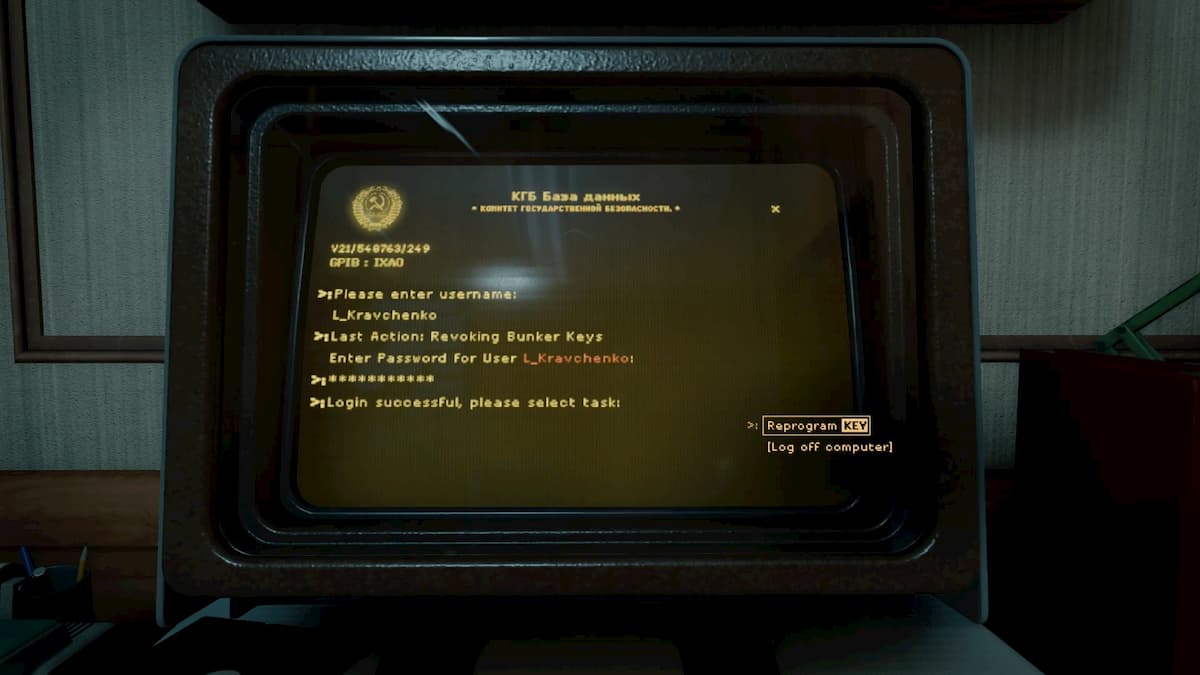 The Call of Duty: Black Ops Cold War story mission entitled Desperate Measures is a suspenseful, open-ended stealth mission that offers a number of different approaches. As Soviet double agent Belikov, you’ll have to obtain a keycard to allow your American allies Bell and Adler into your headquarters. You can frame or poison a general named Charkov, or use a prisoner to kill him, all valid ways to obtain his card. However, you can bypass Charkov entirely and find and reprogram a keycard instead.

There are two ways to do so, both involving a guard in the Armory.

Go to the northwest corner of the headquarters, across the hallway from Charkov’s office. This is the Recruitment Office — if you spared the informant-turned-traitor Richter in the mission titled Brick in the Wall, he’ll be in this office. He’s smoking a cigar, and if you look to your left, a box of cigars will be sitting on a table. Take one.

After that, it’s up to you whether or not you want to kill Richter. If you do so, Adler will surely be pleased.

Go to the northeast corner of the building and talk to the guard stationed next to the armory. Per rules and regulations, he won’t allow you into the armory without the proper paperwork. However, in your dialogue options, keep selecting the Persuade choices. Eventually, you’ll be able to select “[Cigar] I have something for you.” This will be enough for him to let you in. Look around the armory and you’ll find a box full of keycards.

You’ll reprogram that keycard in the Data Entry office, which you’ll have to go through for the second method of opening the armory.

If you want to do this by the books, instead of bribing the guard, you can give him the proper paperwork. This is in the War Room on the northwest corner of the headquarters building, directly south of Charkov’s office. You’ll have to lockpick the door to get inside, but be wary: there is one guard stationed near the War Room, as well as two guards walking back and forth nearby on their own routes. Sneak in when none of them are looking, or stealth kill/knockout the latter two and hide their bodies.

Once you enter the War Room, the Armory Paperwork will be on a table to the left. Sneak back out and present this paperwork to the Armory Guard for access.

Knock out the guard

The Data Entry room is south of the Armory, and you’ll have to subdue a guard inside. Pick the lock into the room when he isn’t looking through the glass door; sneak up on him and take him out in non-lethal fashion (or lethal, if you mess up and he spots you). Stick his body in a nearby locker. In a smaller adjacent room, the computer you need for reprogramming the keycard, but we’ll get to that later.

In the same room as the guard is a vent; open it, go through, and you’ll find yourself behind that cigar-loving guard. At this point, you can do a Nonlethal Takedown, although make sure that the guard patrolling in the hallway doesn’t spot you; it may be easier if you took that guard out earlier. Hide the armory guard in a nearby locker, and push the big, friendly red button to open the armory.

You’ll find a keycard in a box at the back of the armory. Take this keycard to the computer in the Data Entry office, which you can see in the featured image at the top of this guide. Log in, select Reprogram KEY, and you’ll be set to allow Adler and Bell in.