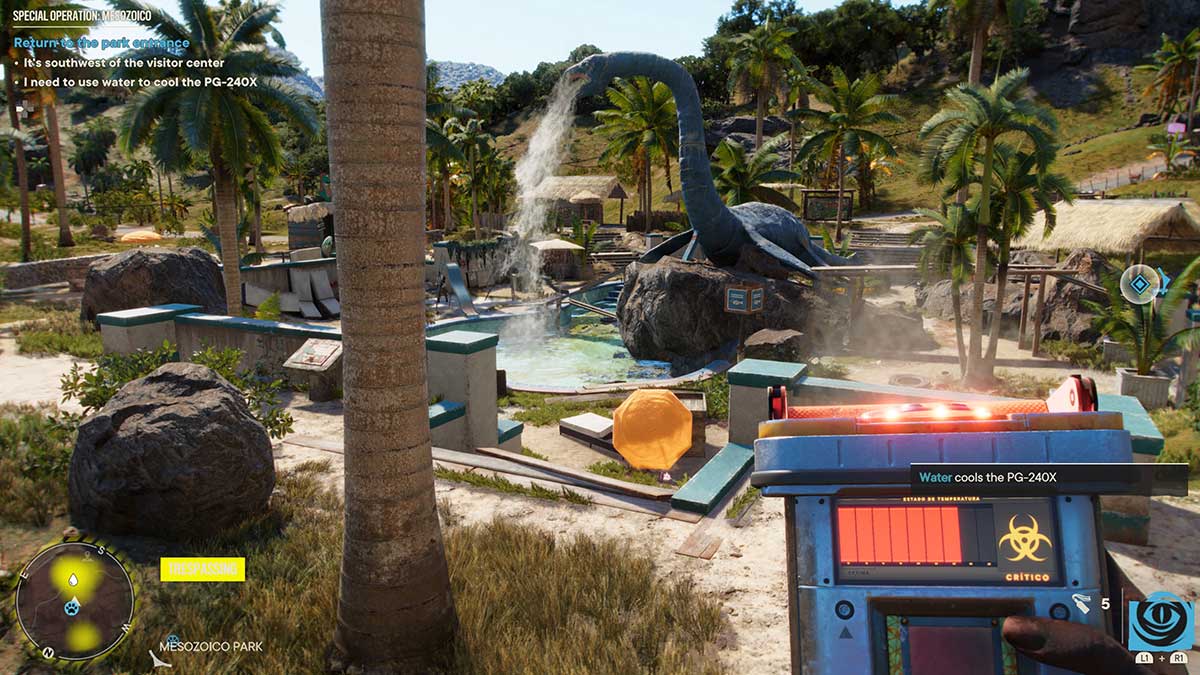 The first special operation in Far Cry 6 is called Meozoico and takes you to a self-contained area somewhere within Yara for a challenging mission you can take on alone or with a friend. Castillo has been developing a bioweapon to use against the guerrillas, but its transport helicopter has been shot down over Mesozoico Park. Now, Castillo’s army is guarding the bioweapon and awaiting evacuation, but you can sneak in and steal it from him. This guide covers how to complete the Mesozoico special operation by stealing the PG-240X.

You can start the mission by speaking to Lola in any guerrilla camp. She has her own vendor outpost and sells black market items with the cash you earn from special operations. As soon as you start the mission, you’ll be taken to Mesozoico Park.

Step 2: Clear out the Visitor’s Center and find the PG-240X

While there will have been a few soldiers dotted around the park as you approached the Visitor’s Center, this location itself is packed with enemies when you arrive. Therefore, you’ll need to approach stealthily and try to take out the alarm before anyone gets a chance to call for reinforcements. We found that using Oluso as our Amigo worked best because she could take a soldier down in a couple of seconds. She’s also great at creating a distraction, allowing you to sneak up and take out guards who turn their back to you.

Once you’ve killed all the soldiers, look around, and you’ll find the PG-240X in a side room near the reception area. Make sure you’re healed up and have replenished your ammo before you touch it, though because the mission changes dramatically as soon as you remove the bioweapon from its cooler.

Step 3: Keep the PG-240X cool while you reach the park entrance

You now have to worry about how warm the PG-240X gets while you run towards the park entrance to escape with Lola. The device will only heat up while you’re in the sun, so you need to run between the shadows cast by rocks, dinosaur models, and trees to keep the heat to a minimum.

Luckily, there are fountains dotted in each major region of the park. You’ll have noticed these as you made your way to the Visitor’s Center, so dart between them now and use the fountains to keep the device cool. You don’t need to have it equipped, but we found that it was useful to be able to see how warm it was at all times. Oluso took care of any stray soldiers that came our way.

Each major region of the park will now have a large concentration of soldiers around it. However, they also have fountains. Rush into these areas and get into the fountains, or crouch in the water to cool off the PG-240X while you take out any enemies that have spotted you. Keep this up until you reach the park entrance, where you can find a nice big shadow with a fountain in as well to the right of the area.

Step 4: Defend yourself until Lola arrives

This is when Lola reveals that she had to bolt because Castillo’s forces showed up to move her on. While she’s making her way back, you’ll be attacked by waves of soldiers that are now swarming the area. Defend yourself while sticking to the shadows and cooling off the PG-240X in the various fountains. The fight comes to an end once you take out the helicopter. We found that the Triador Stealth Supremo and La Varita Resolver Weapon combination worked best because you can shoot enemies through cover once they’re revealed.