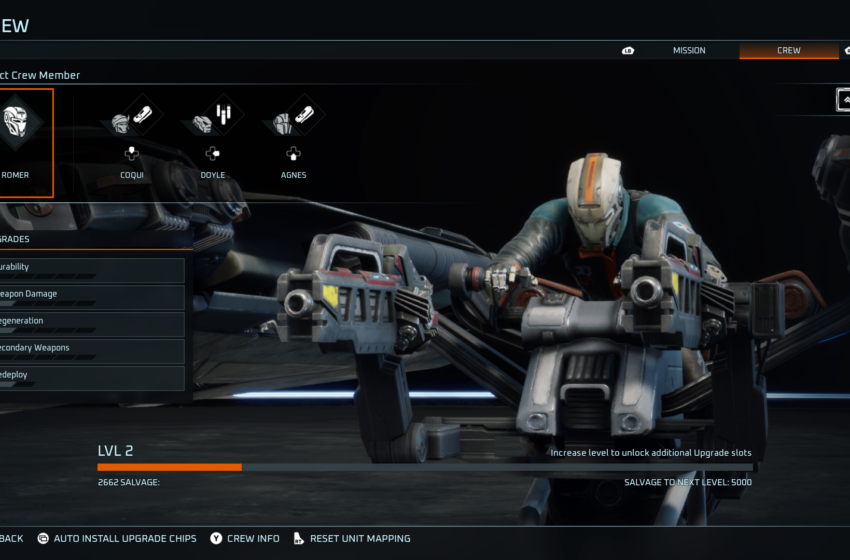 Improving your crews’ abilities in Disintegration is vital as you progress through the campaign. Enemies get tougher and attack in larger groups, so you’ll need to boost your firepower, health, and other stats in order to stay alive and defeat them.

How do I level up my crew in Disintegration?

In order to level up, you’ll have to collect salvage. Our Disintegration salvage guide is your best friend, so go and have a read of that first if you’re unsure about what salvage is. When you locate salvage during missions, you’ll also find Upgrade Chips. Upgrade Chips — which are also given to you as rewards for completing optional story challenges during missions — are what you use to improve your stats and those of your teammates. Once you progress from one rank to the next, new Upgrade Chip slots will be available to unlock on each squad member’s abilities section. Let’s see how you use Upgrade Chips to improve these stats.

What do I do to upgrade my abilities in Disintegration?

Once you have an Upgrade Chip you’ll want to head to the Crew section of the game. You can do this by heading to the computer that’s on your main ship. Interact with it by pressing the cross button on PlayStation 4, the A button on Xbox One, or the V key on PC.

This brings up the missions menu. In the top-right corner, you’ll see an additional menu called Crew. Tab across to this. You’ll see Romer — the character you play — and a number of other squad members. The teammates on show are the ones that you’ll take with you on the next mission. They rotate in and out, so don’t worry if you can’t access some to upgrade them just now. Your Upgrade Chip number is on the right of the screen too. This tells you how many you have left to use and, obviously, once it hits zero you won’t be able to upgrade anything else. You can scroll across to each unit using the D-pad or left thumbstick on Xbox One and PS4, or the A and D keys on PC. Alternatively, you can scroll down to confirm the squadmate that you wish to upgrade.

Once you’ve picked a certain squad member to upgrade, you can scroll down their abilities and choose which one to improve. Once you’re happy with your choice, press and hold A on Xbox One, cross on PS4, or V on PC. Once the meter has filled up and your teammate performs an animation, that stat has been upgraded.

The last thing to bear in mind is that some abilities are locked until you reach a certain rank. You’ll have to rank up to level 10 in order to unlock the fifth and final slot on Romer’s durability, for example, until you reach this rank. If you miss any Upgrade Chips during first-time mission playthroughs — or don’t complete certain challenges — you can replay missions to try and get them. This will help you upgrade your troops faster, and make them better in combat scenarios.