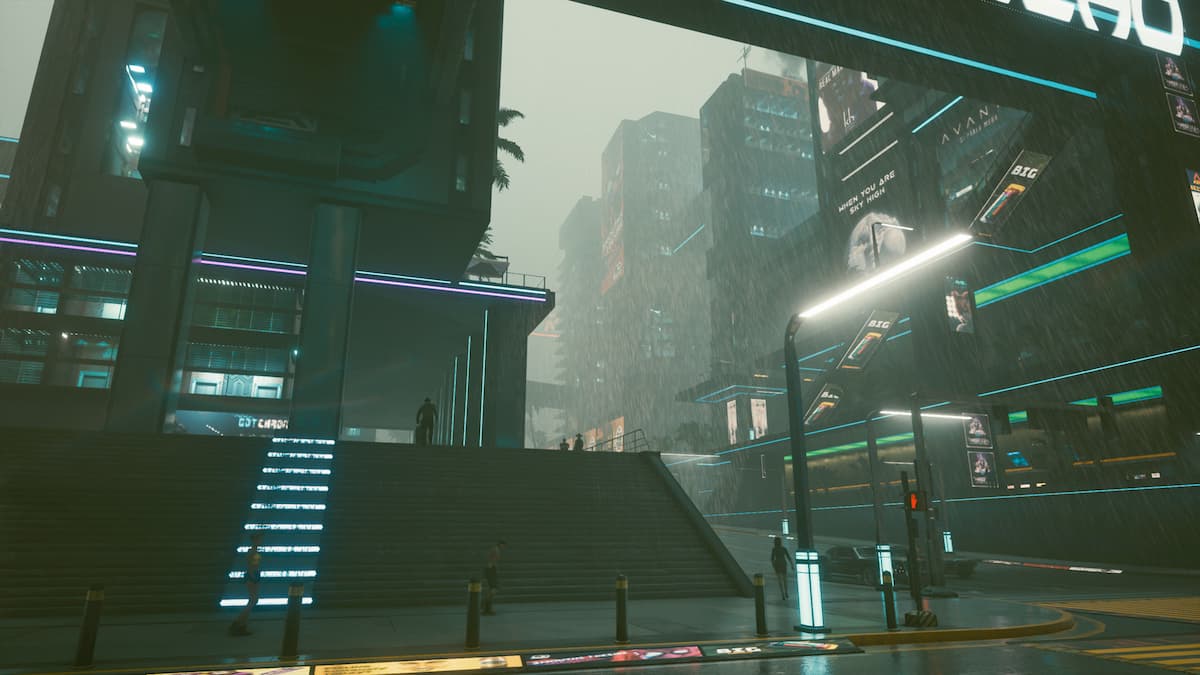 When someone important dies in Night City, it’s seldom by coincidence, and it’s rarely by natural causes. In Cyberpunk 2077, there’s a gig called I Fought the Law where you’ll be investigating the death of Mayor Lucius Rhyne. Supposedly, he died at home of natural causes. But days before his death, he was attacked by a cyberpsycho. It’s your job to figure out if something is fishy or not.

You’ll receive a call from Elizabeth Peralez, and she’ll want to meet with you. If you head to the location, she and her husband, Jefferson, want you to examine the braindance of the cyberpsycho attack to see if anything looks amiss. The braindance is a minute long and gives you several pieces to look at, and Johnny even shows up. He says most of it is you becoming paranoid. Each clue in the braindance is quest related, so long as you follow the editor’s steps, you should find everything. There’s nothing hidden here.

These are all of the points in the braindance you need to edit and review.

After reviewing all of the edits, you can exit the braindance. You can talk to Jefferson and have three choices. Regardless of what you choose, it gets you to the next part of the quest where you have to speak to the officer who took down the cyberpsycho, Detective River Ward. You can call Ward on your phone as a new contact. The conversation has you and Ward meeting up at the Chubby Buffalo’s, where you meet Ward and his partner. You’ll team up with Ward to investigate the cyberpsycho’s boss, and then the Red Queen Club.

You can ask around to vendors to find the worker’s boss, but you can also wait a minute for Ward to find her first, and he’ll lead you to her. After meeting her, you can meet with Ward’s CI to learn about the Red Queen Race.

Talking to Ward’s CI about the Red Queen Race

When you meet with Ward’s CI, he sends you inside to speak with him. When you approach the counter to talk and provide the secret password, he rushes out of the store and attempts to escape. Ward cuts him off, and the three of you talk about the Red Queen’s Race. You learn it’s location, and Ward can take you straight there.

When you arrive, you learn the area is Animal territory, one of the many gangs in Night City. Ward can’t go in, but you can. To sneak into the warehouse, go to the left side of the building. There will be a side door you can sneak in that exposes a set of stairs. Head down them, and into the small opening.

The building that you can enter from the bottom has one guard enter. Waiting they’re at the desk, and then take them out. There’s a dumpster nearby you can hide the body. After you take care of them, walk out the small building, but stick to the left side of the complex. Follow the fence until you arrive at the warehouse. If you have five points in technical ability, there’s a door you can open for easy access. If you don’t, approach the front of the warehouse, and there should a small gap you can sneak in, on the right side.

The entrance to the club is right in the middle of the warehouse. It’s the large container with yellow down arrows on the side of it. Approach the container, and you can open the door. There are several guards in the room, many of them up top, and you can take them down before accessing the container to make your life easier. The container leads to a stairwell, that takes you to an elevator downstairs.

Look for the office and incapacitate the Animal Boss

When you reach downstairs, you need to find the office for the club. The office is in the back, and the boss is having a conversation. Once you grab them, you can interrogate them real quick.

If you interrogate the boss, you learn Deputy Mayor Holt sent the Animals to wreck up the club. When you search the computer, investigate the files, check out the recording, and you learn Han is involved in it. Return to River at the entrance, and the two of you will confront Han.

When you return to speak with Han, he and River discuss the politics of the city, and then leaves. You and Ward will talk, but regardless of your choices, in the end, River believes Holt killed Rhyne, and he’s going to report it to internal affairs. You need to call Elizabeth.

The final step is to speak with Elizabeth and Jefferson back at their penthouse. Speak with them, and you’ll have two choices to share about your investigation.

Either choice brings you to two more options where you tell them your thoughts about what went down.

If you tell them that Holt was behind Rhyne’s death, the two will take proper measures on their end, and thank you for confirming their suspicions. But if you tell them it was an accident, and the NCPD covered it up, the two will say they’ll be able to sleep better at night. Any of the choices provide you with your fee, and you’re free to leave the building.

After we completed the quest, our actions didn’t appear to alter too many outcomes. We still received our payment, and River still went to speak with internal affairs about the Han and how Holt likely caused Rhyne’s death.

A short time after, River will call you, and it starts the gig, The Hunt.