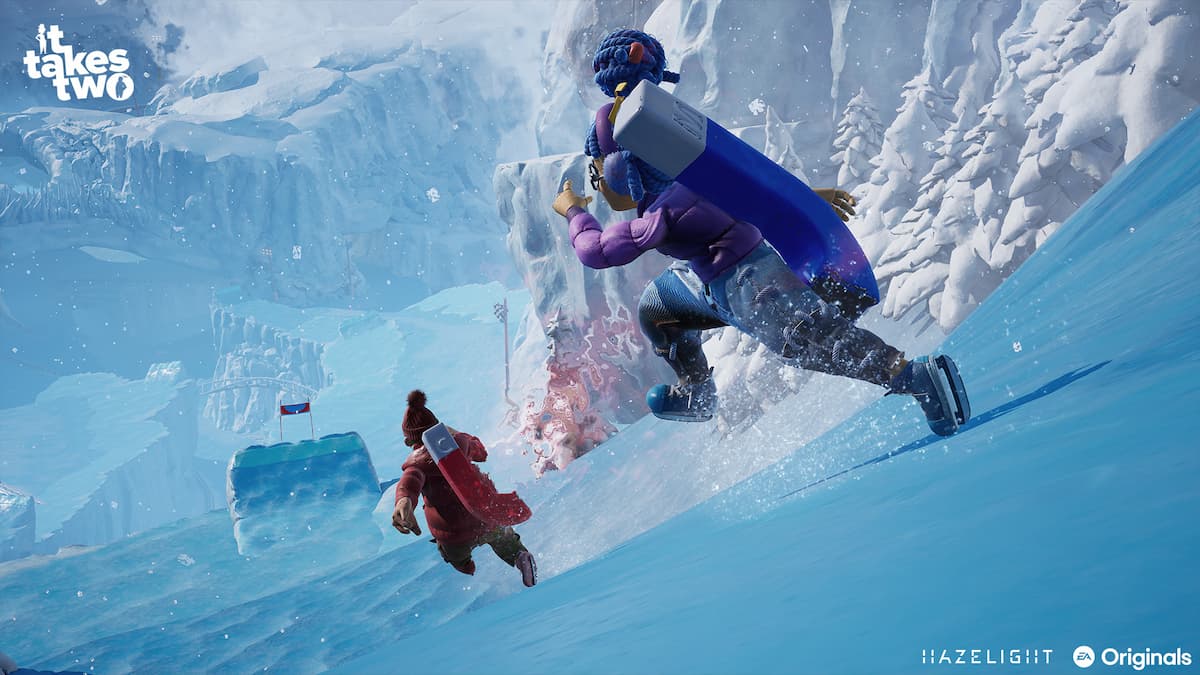 There isn’t much thematic subtlety in It Takes Two, so the Snowglobe story chapter focuses on reigniting the attraction between May and Cody — and the main gameplay involves magnets. This is a setting based on May and Cody’s first skiing trip, and unlike the previous chapters, there are fewer nightmare enemies to fight. However, there are still plenty of puzzles to be solved, so get those magnets at the ready.

May will have one end of the magnet, colored blue, and Cody a red end. Use these magnets to either repel or attract blue and red metal objects — for example, May can push blue objects away, or shoot off of blue metal discs, and Cody can pull in blue objects, or fly to blue metal from a certain range. Open doors, swing platforms for each other, lower and raise bridges, operate a saw, and even utilize a catapult with these magnets.

One tricky sequences requires you to turn two different parts of a bridge back together. Your end of the bridge will be turned to the left; Cody can walk to its left and place it back by repelling it with his red magnet. However, if he lets go, the bridge will simply roll back. Therefore, you need May on the far right side to keep the bridge in place. Once May has ahold of it, Cody needs to walk on this half of a bridge and pull the other side of the bridge, which has a blue magnet, towards him — then, they will lock into place.

After reaching the cabin, Cody and May will be properly dressed for the winter, and you will even be able to enjoy a downhill ice skating sequence. Open a door together with your magnets and enter the Winter Village next.

This village is large and usually teeming with life, but everything appears frozen and lifeless. You are told to “break the ice” by ringing tower bells, restoring the town to what it once was. The intro to this village will require Cody to lift a large stone for May to wall jump off of while Cody raises it; once May is at the bell, use the magnet to ring it.

You will open another door with your magnets to reach the larger part of town; here, there are three bell towers with their own puzzles, each also unlocking an area with minigames.

The leftmost tower is a puzzle that has May rotate a wall around. Cody will have to wall jump to the middle of the tower and cling to the rotating wall; stay on the wall until May rotates it back to the left for Cody to get on higher ground. Cody can then get on top of the platform — May has to turn the mechanism back to the right, towards the tower, and Cody must repel off the red disc to get to the top of the tower.

The center tower has a large rotating vertical wheel with magnets on opposite sides. There is a smaller wheel that operates it; have one player position it so the other player can attach themselves to the metal disc of their opposite color. Then, bring them up top on the wheel. You will then have to turn the wheel so that their own color disc is on top, requiring the player on the wheel to run in the opposite direction to stay on the wheel. For instance, if May is on the wheel, she needs the blue disc pointing up. Launch yourself upwards, and find another small wheel you can use to the player below can come up the same way. Use your magnets to operate an elevator up to the bell.

Finally, the rightmost tower will have Cody operating a slingshot. May must go to a massive ice wall, and Cody will shoot red discs at the ice wall for May to latch onto. May is going from right to left, so shoot the disc right to left; gravity will pull them down slowly, and the discs will be destroyed when they hit the ground. Coordinate to get May across safely, creating a line of red discs for May to travel on. She will then be able to ring the final bell.

Find a dome in the center of the town; activate it and it will turn into an elevator, lifting you away from the town and to a party. What follows next is an exhilarating speed sledding sequence, one that will get you to the ice.

It’s time to go underwater — luckily, puppets can breathe down there. Swim up, down, or dash, and you will still get a lot of utility from your magnets — look for magnetic spheres that can help you pick up speed. May and Cody are tasked with restoring three generators to restart a candy factory. As you can guess, there are three more puzzles to solve that you can tackle in any order. To find them, simply follow the pipes that come out of the factory; once a generator is repaired, you will see delightful candy cane colors going through a pipe.

The center pipe goes down even deeper into the ocean floor. There are three loose screws on the pipe, and there is conveniently a wrench nearby. Pick up the wrench with your magnets, one person on each end. You need to go to each screw, fit the wrench onto it, and tighten it by turning the wrench clockwise — righty tighty, lefty loosey. This might sound straightfoward, but keep in mind that there is a giant fish looking to eat you. If it makes a move towards you, swim away and worry about the wrench afterward.

The pipe going to the right will take you into a current, and you will have to swim between spinning fans. After reaching land, use rope and metal discs to move forward to a sequence with water pillars to jump into. You must dash from one to the next, eventually having to dash through similar spinning fans. Eventually, you will reach a wheel, and you will use your magnets to repel the metal and turn the wheel counterclockwise to power the generator.

Finally, the pipe going to the left will actually take you out of the water and on top of the ice; you can find the Ice Race minigame here and the Terror of the Seven Seas achievement as well.

There is a large dome at the end of the pipe, and May will have to let Cody in. In the dome is a long platform that May can control with her magnet from the outside. The key to this puzzle is realizing that the platform is double-sided. It will be impossible to get Cody to the top entryway in the dome, so let Cody off to the bottom left of that entryway and have May flip the entire platform upside down. Cody can go back on the platform, and May can move it for Cody to finally reach the generator.

Return to the factory and activate an elevator, and then run up to the top of the lighthouse.

Enjoy a pleasant scene on a ski lift, and then carry forward to another fast ice skating sequence, one with rails and magnets to help you build up speed. Puzzles ahead will have May moving a frozen statue for Cody to use as a platform; Cody will also have to swing on ropes that May has to move with her magnet. After more skating, and a total collapse of the mountain, Cody and May will have stronger magnet powers.

The two can now pull in each other with their magnets; think of your partner as an opposite metal disc to fly towards from a distance. Use each other to get across gaps, and if you both need to meet in the middle, both of you should active your magnets at the same time. Use these same techniques to get past a blistering wind and to the end of the chapter.