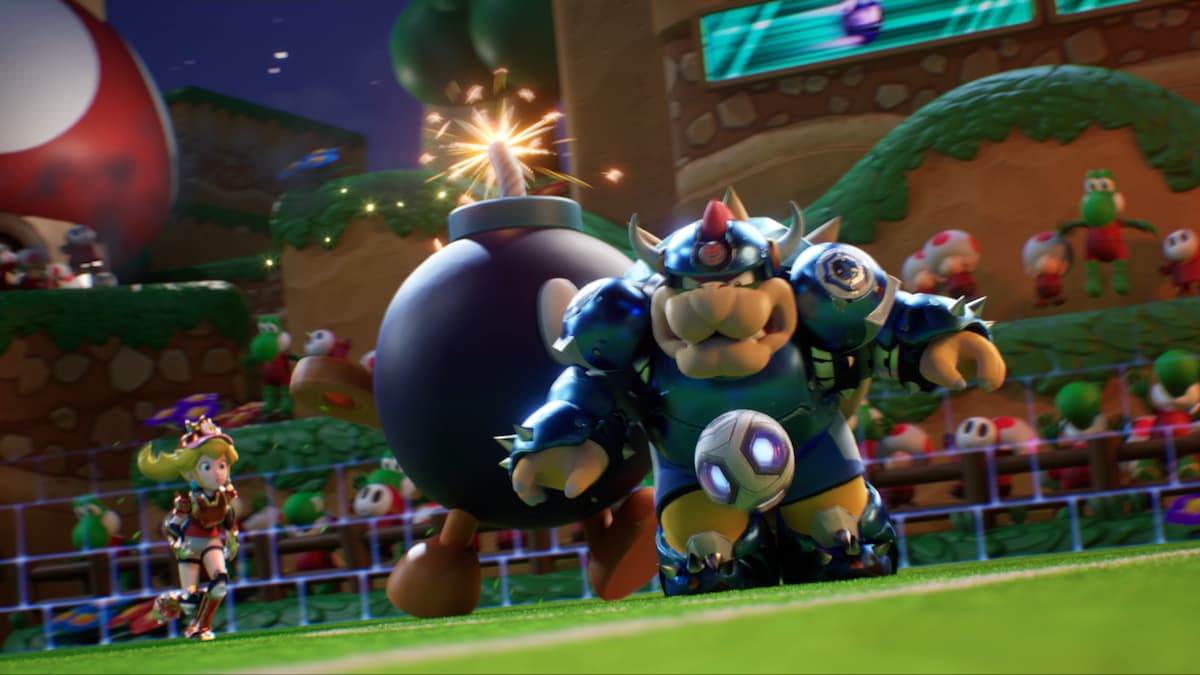 There are 10 characters to choose from in Mario Strikers: Battle League, each of them possessing different levels of the same five attributes. While any character can be built to meet a certain expectation, each character has a specialization that they are best at. For some, they are great at rushing the opponent and scoring goals. Others are better at defending your side of the field and making sure the opponent can’t advance. Which characters should you place in each of these positions?

Rosalina and Mario are the best for hitting the field hard and scoring goals for that sweet, sweet victory. Mario is easy to handle with his well-rounded stats and great technical attribute. Rosalina is able to hit opponents where they hurt with her high strength and great shooting attributes. Either character is able to handle the front lines well.

Going down the tier list, Wario, Bowser, and Peach are each strong contenders for the top spot with each of them having the necessary attributes to help you score. With easy modification, Peach’s shooting attribute can be raised to match her technique attribute to help really drive the ball home. Bowser and Wario, on the other hand, both possess high strength and shoot attributes similar to Rosalina but very much lack speed.

Luigi, Waluigi, and Donkey Kong bring are where things start going downhill. These characters may be strong, speedy, or great at passing, but they lack the necessary skills to make them a great forward player. The same can be said about both Toad and Yoshi.

Starting off this list are Yoshi, Toad, and Donkey Kong. The rear of the offensive pack is great for their mid-field capabilities. Toad has the speed to be anywhere on the field that you need him while also having a great passing attribute to get the ball to the offensive player. The same can be said for Yoshi, with a noticeable lack of speed compared to Toad. Despite their slow nature, both Yoshi and Donkey Kong have great ball control for passing. Donkey Kong might be better than Yoshi thanks to his high strength which gives him resistance against being tackled.

Going down the list we have Luigi, Bowser, and Wario. Wario and Bowser both have high strength that helps against being tackled. They also possess a high shooting attribute that helps score goals if the need arises. Luigi, on the other hand, is a more well-rounded character like Mario but with a high passing attribute that helps get the ball across the field.

In the end, we have Mario, Peach, and Waluigi. While each of them is strong with certain aspects of the game, they lack the necessary skills to be strong mid-fielders like the rest of the pack. Peach is perhaps the best of the three thanks to her slightly high passing attribute.

Last, we have Rosalina. While she was in front of the pack before, she doesn’t have what it takes to be a strong mid-fielder. Her strength, passing, and speed scores are too low to make her a strong option.

The best defenders by far in the game are Waluigi, Wario, and Donkey Kong. Each of these characters possesses high strength for beating back the opponents. While the other stats of vary, they each have at least one other stat that helps on the defensive line. For Waluigi, his speed helps him reach opponents. For Wario and Donkey Kong, their passing helps get the ball back to your teammates.

In the next tier down we have Bowser, Luigi, and Peach. Peach possesses high speed and good passing that helps get the ball to your teammates. While her strength is low, you can easily equip gear to increase it. Bowser possesses high strength and an okay passing attribute. Increase his passing to really help get the ball back to your team. Lastly, Luigi has mid-tier strength and great passing to help steal the ball back. Increase his speed and strength to make him a real threat.

At the end of the list, we have Toad, Yoshi, and Rosalina. While Toad has a good passing attribute, he lacks the strength needed to get anywhere and you will need to waste a lot of gear making him viable. Rosalina may have strength, but she lacks the passing and speed attributes needed for the defensive role. Yoshi also lacks the speed and strength needed for this important role though he is better than the other two thanks to his extremely high passing attribute.

Last is Mario with scores that scream that he should be in front.