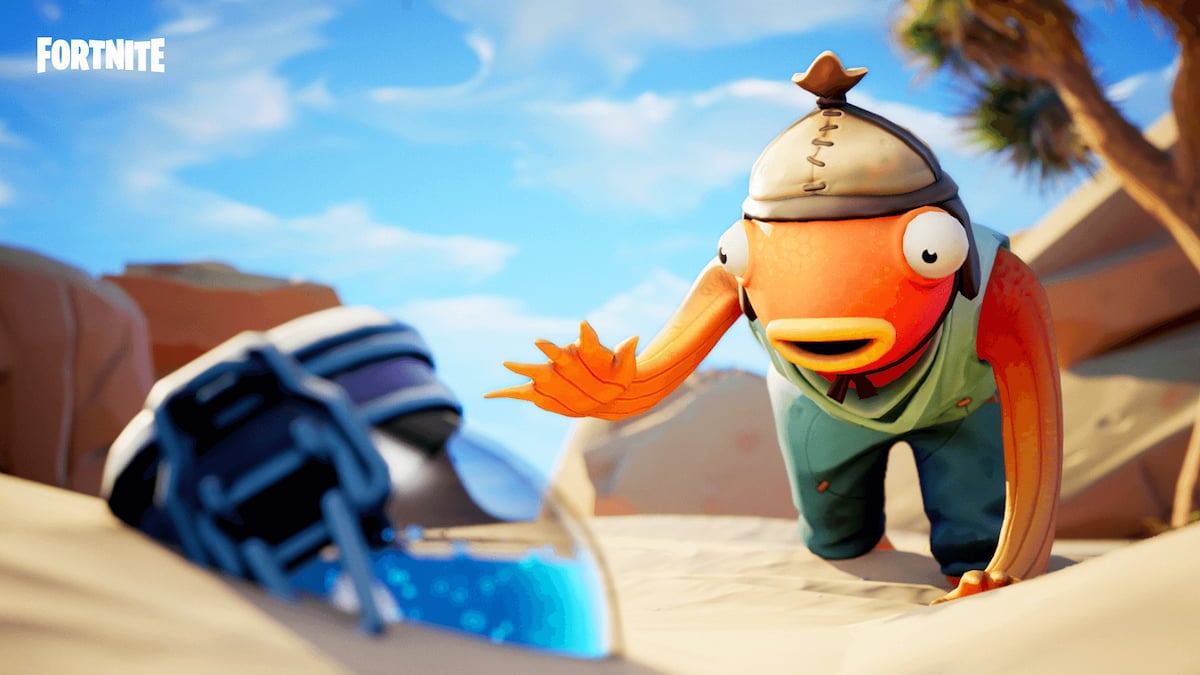 Fortnite has debuted handfuls of animal-based cosmetics, though its famed fish skins have gained a reputation for arguably being the most adorable and diverse. These range from a piranha in a spacesuit to several wacky spin-offs of the game’s iconic Fishstick character. However, these wonderfully designed skins can cost thousands of V-Bucks. So, to make sure you get the absolute greatest for your hard-earned currency, here are the 10 best fish skins in Fortnite, listed in alphabetical order.

Atlantean Fishstick transforms the beloved Fishstick NPC into an underwater warrior with gold-plated armor and sapphire gems embedded into its chests and helmet. The Rare tier cosmetic also comes with a matching Titan Scale Back Bling that holsters two golden daggers. Luckily, Atlantean Fishstick is a fairly common item to own. It arrives in the daily Item Shop rotation on average of every 41 days, always priced at 1,200 V-Bucks.

One of our favorites, Bryne is depicted as a queen with vibrant maroon scales as well as a sleek blue and white bathing suit. The Rare cosmetic lands in the shop just about every month for 1,200 V-Bucks. Better yet, those who purchase Bryne can give her a translucent cape in the form of the Coral Cowl Back Bling.

As terrifying as it tries to be, another lovable skin based on Fishstick is Fishskull. The cosmetic dresses the character in a full-body skeleton costume that is nothing but black and white. However, it is not sold individually. Players wanting to own Fishskull will need to buy the Skull Squad Pack for $19.99, though the pack also includes three other Halloween-themed skins. That said, this bundle typically drops into the in-game store for a limited-time each October.

If you’re a diehard fan of the battle royale, the original Fishstick is certainly a must-own. It dawns the NPC’s light blue outfit and brown cap, but there are also three additional styles the skin can wear. This includes a Pirate style that substitutes his basic gear for a eyepatch and a black sailor cap. Fishstick is usually made available once a month for 1,200 V-Bucks.

Although it is not exactly a fish, Gummy Fishstick reimagines the NPC as a colorful candy that has somehow come to life. Like any fruit snack, you can expect it to come in different colors, as skin owners have the option to switch between a red, orange, or yellow variant. The cosmetic has only appeared in the Item Shop during Fortnitemares 2021, so it will likely make a return for 1,200 V-Bucks near next Halloween.

There may not be a fish skin as strange and unique as Leviathan. Despite it first coming off as fairly standard with its basic white astronaut suit, a piranha can be found swimming in its helmet and seemingly controlling the rest of the body. Since its debut in 2018, the skin has been up for grabs in just 27 Item Shop rotations for a steep 2,000 V-Bucks. However, with Leviathan making six appearances already this year, it is bound to come back very soon.

Aside from Bryne, the only other female fish you can obtain is the gorgeous Princess Felicity Fish. The character is suited in a light blue dress with gold designs dazzling throughout it, but it also features an optional purple outfit for those not wanting to draw too much attention to themselves. Potential buyers can expect Princess Felicity Fish to return to the in-game store about every 77 days with a price tag of 1,200 V-Bucks.

Slurp Leviathan is not just one of the best fish skins you can own, it is the rarest to date. The item is a part of the 2,000 V-Buck Slurp Legends bundle, a set that hasn’t been available since March 2020. Though, as bundles tend to return after years without an Item Shop appearance, there’s still a chance it makes a long-awaited return. The skin is a light-hearted take on the original Leviathan, but with an all-black suit and a friendlier blue fish behind its glass bowl.

Even if you don’t like the old school cartoonish design of Toona Fish, it can be customized to your heart’s desire. The skin gives owners the power to use 21 different colors to paint everything from its head, hat, arms, and even accessories to their liking. Thus, its number of optional styles is almost too much to count. Sadly, Toona Fish was exclusive to the Chapter 2 Season 8 Battle Pass, meaning its chances of being in the Item Shop at anytime are slim to none.

Triggerfish is yet another Fishstick cosmetic, but this time around, the sea creature is shown doing his best Rambo impression. That is because the skin is decked out in military gear and a long sweatband to prove he’s ready for some heated firefights. Triggerfish comes packaged with two extra styles that allow players to equip black face paint or a heavy duty combat helmet to the skin. The character hits the Item Shop about once every two months at the cost of 1,200 V-Bucks.