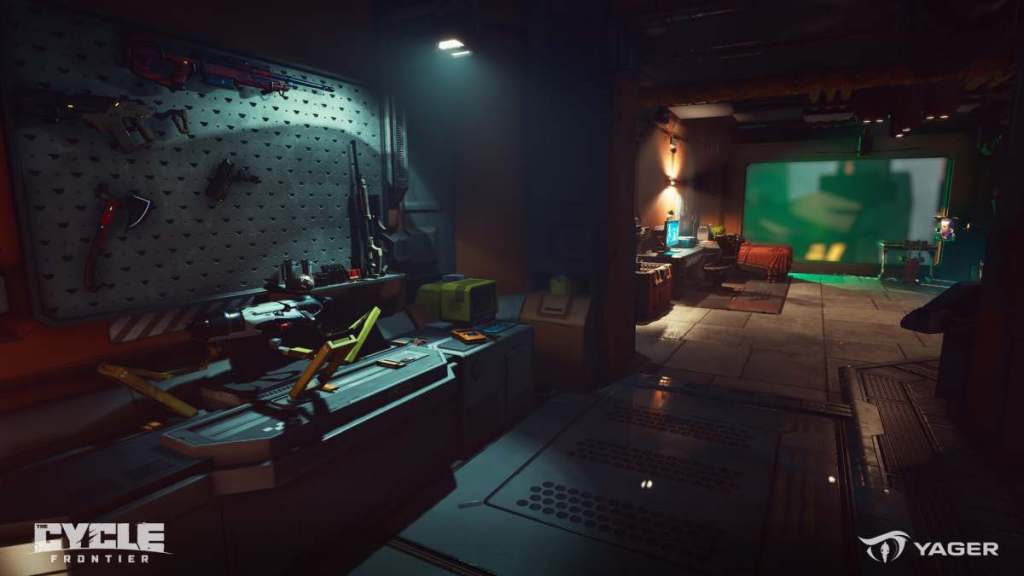 Complementing its high-stakes shooter-scavenger gameplay, The Cycle: Frontier has a deep economy metagame. Frontier has dozens of unique resources, currencies, guns, weapon attachments, armor pieces, and other items, all of which can be looted, crafted, sold, or invested into a number of progression systems. It can all be a little overwhelming at first. This guide will walk you through the most important resource management principles and tips in The Cycle: Frontier so you can get the most out of the game’s economy, and enjoy your favorite items and loadouts without running out of K-marks.

Since you can have no more than one active contract per faction, picking the right contracts is key to getting the most out of every drop. The first thing to note is that you should not take most fetch contracts — meaning contracts asking you to deliver set amounts of specific resources. Instead, you should keep a high amount of resources floating in your storage, so you can instantly fulfill fetch contracts the moment they show up in the Faction office. You should only drop on Fortuna III with contracts that actually require you to be there. In general, PvP and hunting contracts are the best, because your progress towards fulfilling them is not reset when you die on the surface, and you can complete multiple such contracts in a single drop if you are efficient or lucky enough.

Also be wary when taking Dead Drop contracts, as they vary wildly in how well they reward you for the risk. The ones asking you to drop off Old World Currency are the best ones to take on since they are zero risk: Old World Currency has no weight, and you can keep it in your Safety Pocket until you can successfully put it in the Drop box.

What to sell and what to keep

As you play The Cycle: Frontier you will develop a good sense of which items are worth keeping. As mentioned already, you should keep a stockpile of almost all items and resources (and especially Blue Eggs, Polymetallic Prefabricate, and all types of Veltecite) so you can quickly fulfill fetch contracts.

You should sell any Rusty weapons you find, as well as the basic K-28 pistol. You wouldn’t want to use these weapons against players, and you can fulfill weapon-specific hunting contracts with the Scarab burst pistol and the Scrapper SMG. This is a matter of taste, but we would recommend holding onto the basic AR-55 autorifle and the B9 Trenchgun for those contracts, since the items next up the ladder in each weapon’s category — the Manticore AR and Bulldog shotgun, respectively — are much more expensive without actually being that much stronger.

As you start your journey into The Cycle: Frontier, you should make it a habit to hit up the Crafting Bench often and take note of items that work well with your preferred playstyle. If you like sniping near extraction points, you can write down which resources you need to farm for DMR and sniper rifle attachments, and high-tier helmets. Conversely, if you want to just roam the map and avoid combat, take note of which resources you’ll need for high-capacity backpacks, stamina armor, and anti-creature attachments. This information will in turn direct you where to go and what to scavenge and mine for while on the surface. Instead of wandering, you will be purposefully collecting the items most relevant to you.

Everything good comes to an end, and your entire collection of high-tier items and precious resources will eventually be gone. This is because, just like Escape from Tarkov, The Cycle: Frontier has regular progress wipes. With the start of a new season, everything players have accumulated in their inventories is deleted, starting the hunt over again. This brings us to the most important tip we can give you about the economy in The Cycle: Frontier: have fun with your items, and don’t hoard them. A fully kitted KBR Longshot is a lot more fun when you’re hunting with it on Fortuna III than when it’s collecting dust in storage.