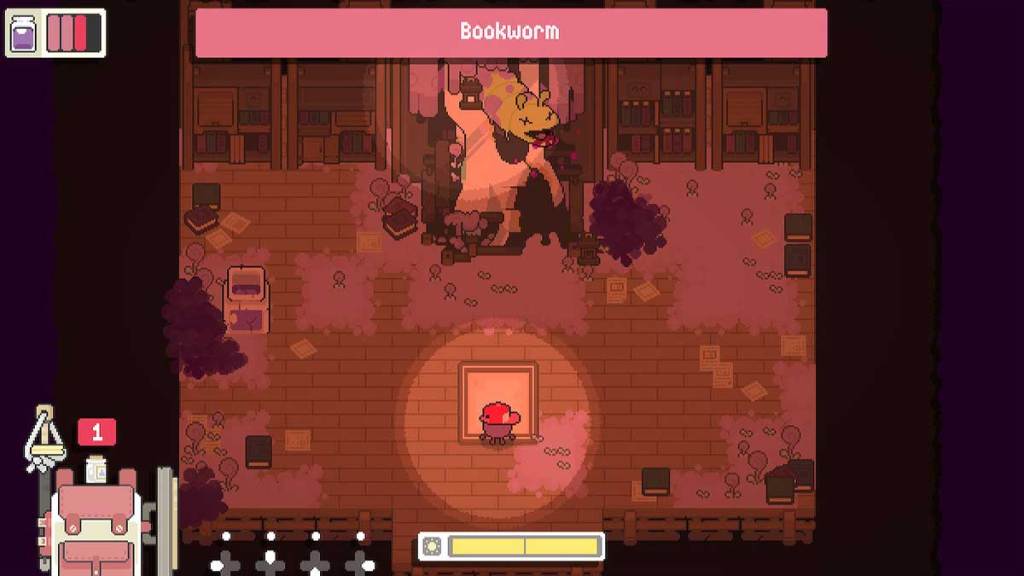 The first boss in Garden Story is the Bookworm. This giant paper-eating beast is one with the Rot, and it can be a challenging fight if you don’t know what you’re doing. That’s why we’ve put together a few tips and tricks to help you beat this boss when it comes to it.

You should equip the right memories before going into this fight. You’ll only have one slot, so you need to make it count. While it’s nice to have a bonus to your luck stat, we recommend using Plum’s Fond Distance memory because it gives you +2 to your max health.

Go in with a lot of Dew

Don’t go into this fight without a decent amount of healing items. It’s so easy to forget to refill your jars, but make sure you do before going into the library and preparing for the fight. This simple step could make the difference between you winning the fight and losing.

Only strike between attacks

The Bookworm has three phases to each round of its movement. It will first summon Ooze to drop from the ceiling. This ranges from major Ooze enemies to the small purple blobs that can be a little annoying. After it does this, the Bookworm will be open for an attack. Get in and hit it twice before moving away. You won’t have enough time for your stamina to fully recover before the boss does its next attack, firing Rot at you. Dodge the Rot and repeat this process for every round until the boss is dead.

Watch out for the bombs

Occasionally, the boss will drop purple bombs. You can see these because they fall to the ground and don’t move. They have a timer around them that counts down before they explode. However, the damage they deal is quite high, so if you see one, stay away from it.

Use your shield to kill the purple blobs

The small purple blobs that hop around the boss arena can cause damage repeatedly without much consequence. However, you don’t need to follow each one and hit it to kill it. Instead, you can hold up your shield, wait for the indicator to glow yellow, and walk into them. This will kill or damage anything it touches. Use this to kill the purple blobs and save yourself from losing any health unnecessarily.