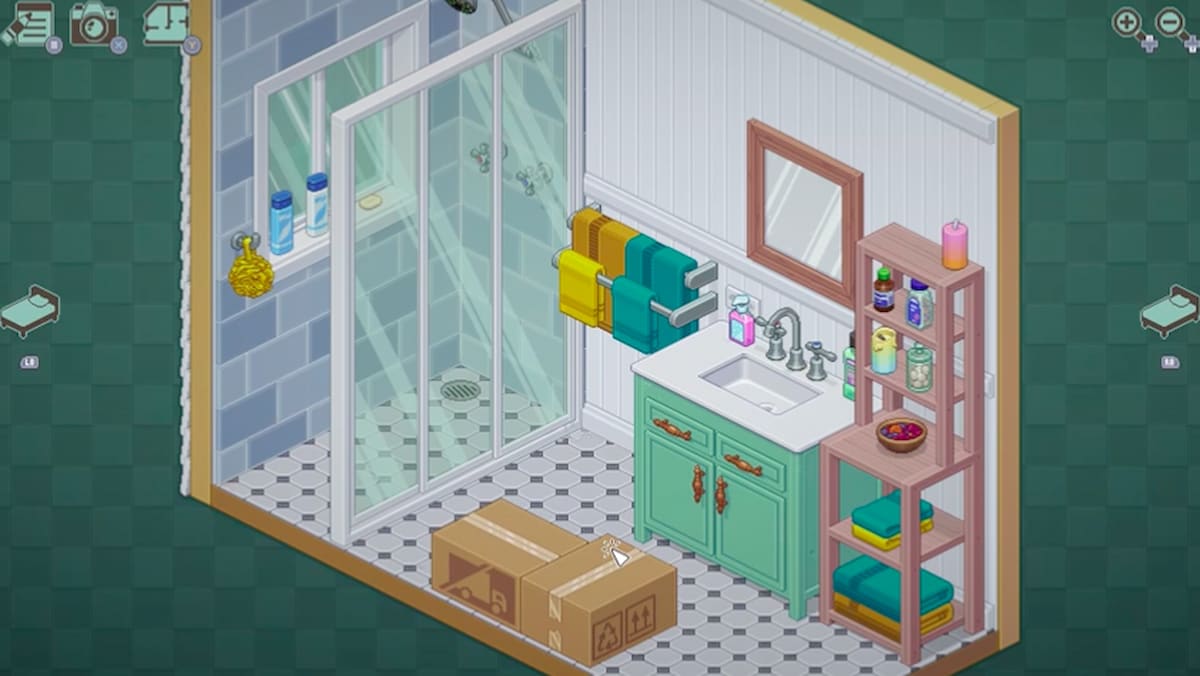 As one can probably tell from the picture frames in Unpacking’s 2012 level, our unnamed protagonist is back visiting their original home from the tutorial level. However, that doesn’t mean you’ll be unloading the entire house anytime soon. Instead, this chapter focuses only on her bedroom and bathroom belongings. Here’s where you’ll need to place everything found in their boxes.

For such an unorganized adult, there surprisingly isn’t much that will need to be done in this tiny bathroom. Smaller everyday items will have to be placed near the sink, including the hairbrush, nail clippers, perfume, deodorant, toothbrush, and razor. The various lotion bottles and pill boxes can be tossed onto the nearby shelves, as the med-kit should once again be tucked into the lower cabinet.

The oddball item in this level will be the coffee cup randomly found in the last box opened. Instead of moving it to the other room, place it to the far-right of the sink to complete the bathroom.

To begin the bedroom, you’ll be better off setting aside everything on the bed that isn’t a book or video game. Then zoom out with your respective console’s down button to find an extra shelf hiding near the ceiling. This is where you need to stack most of the books. As for the two square-shaped game cases, they must be stacked in front of the sewing machine and against the back wall to complete the chapter (as shown above).

Next, rummage through the box to find the loose drawings and family photos. These will need to go on the wooden board that sits above the bed. However, one seemingly featuring a mother and daughter hugging will need to be stored inside the cabinet below the window, along with the folded purple cloth.

Related: Where to put every item in 2013 – Unpacking item placement guide

As usual, all stuffed animals found are required to be on the bed, with each of the bags and workout supplies tucked away underneath. If done in this order, place the remaining items on the desk (in no particular position) to complete the 2012 chapter.