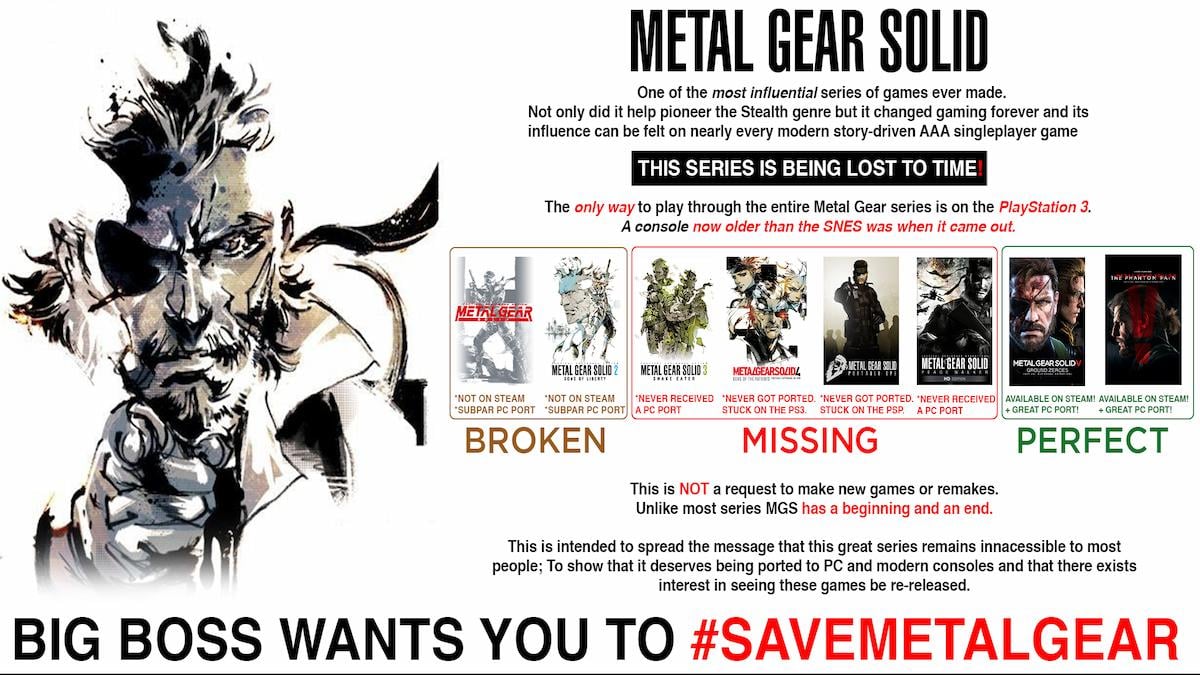 Fans of the Metal Gear franchise have started a movement urging Konami to port the series to modern consoles, including PC. The #SaveMetalGear trend was formed shortly after Konami’s announcement that digital versions of Metal Gear Solid 2 and 3 would be temporarily delisted from online storefronts starting today.

A Reddit user named TonyAbyss posted an infographic for the movement on r/MetalGearSolid yesterday, requesting the subreddit’s users share it on their social channels.

“This series is being lost to time,” read the infographic. “The only way to play through the entire Metal Gear series is on the PlayStation 3. A console now older than the SNES was when [the PlayStation 3] came out.”

The infographic also provided a breakdown of how accessible or inaccessible each game is to play nowadays, with the games grouped into one of three categories: “broken,” which are entries previously brought to PC that are “subpar PC port[s]”; “missing,” which are games presently stuck on past-generation consoles that never received a PC port; and “perfect,” which includes entries available on PC that were satisfactorily ported.

Fans of the series took to Twitter to share the image, requesting that Metal Gear publisher Konami re-release the series on modern hardware. “[I] would really like to play the whole series on PC, even Twin Snakes. Please [Konami], make Metal Gear accessible to all,” wrote Twitter user sadsenate.

Regarding the delisting of Metal Gear Solid 2 and 3, Konami stated yesterday that the takedown was due to licenses for archived historical footage expiring, and that it would “work towards making these products available for purchase once again.” This has been taken as confirmation that Konami does intend on relisting the games in the future, but it’s unknown when that will be, or whether the publisher plans to deliver on fans’ requests to bring the series to modern consoles or PC.