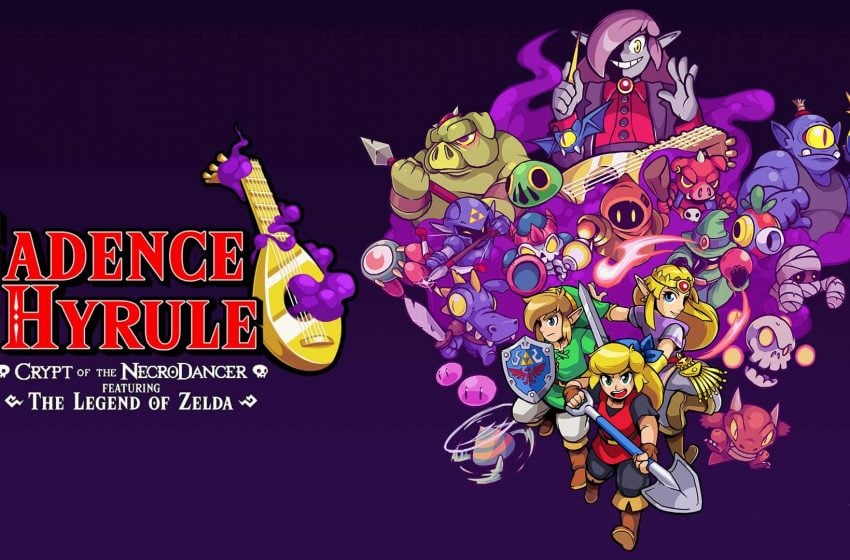 First things first, I have a bone to pick with the way people talk about this game. I have seen it called a “crossover” more times than I can count. I understand why, but it isn’t a cross over. A crossover implies, about entertainment media at least, an appearance by one well-known property in another well-known property. This is not what Cadence of Hyrule is. Cadence of Hyrule is an amalgam, which is to say a mixture or blend of two things. Calling it a crossover is a disservice to the game, and potentially gives people the wrong impression. In this review, I hope to be able to provide you with the right impression.

So, we are going with amalgam. The reason for this is that Cadence of Hyrule is very much a Crypt of the Necrodancer game, and it is also very much a Legend of Zelda game. The way you move around the world, and fight monsters, matching your movements to the beat is pure Necrodancer. It is probably the defining element of Necrodancer. But the world you move through and explore, that is pure Zelda. Cadence of Hyrule is the perfect blend of two different games, and it works so well because it takes the standout elements from each one, and fuses them in a way that only a genius or a lunatic could have considered doing.

Developed by Brace Yourself Games, the combat is fueled by the excellent soundscaping of Danny Baranowsky. The same deft level of care that was used to fuse Zelda and Necrodancer is firmly on display in the music as well. Cadence of Hyrule takes some of the best-known themes from Legend of Zelda and gives them just a little twist to make everything work for a game that is powered in every way by the music. The music dictates how you move, and how you move dictates how you fight. It is vital to learn enemy patterns, how they react to you and tries to close in on you, and then dance around the screen delivering deft strikes of your weapons, or cleverly using your items, to survive. Once the screen is clear, the music stops demanding that you boogie along to it and you can explore freely.

It is in this exploration that the game oozes Zelda’s sensibilities. There are dungeons, secrets, items to find that you need to get access to other mysteries. There are bosses to fight, puzzles to solve, and lots of characters to wake up, starting, of course, with your choice between Link and Zelda. The game opens with Cadence, one of the heroines of Crypt of the Necrodancer, finding herself in a strange land. A wizard has enslaved the world to the beat, and she needs to find her way home. She quickly finds Link and Zelda both asleep, and by waking one of them up the game begins in earnest.

Each playthrough results in a jumbled up overworld map, so nothing is ever in the same place. You’ll be exploring the map each time you play, tracking down the items you want, the bosses you want to kill, and the dungeons you want to explore to discover their secrets. You can find special points that you can warp too, allowing you to travel between different sections of the map quickly. You can even find a magic Lute that will enable you to do this from anywhere.

The game also works off an interesting reverse difficulty curve. I’d predict a 5 to 6 hour clear time for anyone comfortable with the movement and combat mechanics, longer for those who are getting to grips with them for the first time. You might die, a lot, but items and weapons you discover will stay with you, a cruel aspect of roguelike games that have been abandoned for Cadence, and you can see why. The trick to Cadence of Hyrule is that it has a broad appeal, as you play, it will get easier. A bigger sword might allow you to swipe three squares at once, while a spear lets you attack from two squares away.

The difficulty here is, in a way, entirely optional, you might need to get smacked around a little before you learn enough to understand this element of the game. The real content for most people who are attracted to these types of games will be the hardcore runs. One life, and one life only, to get everything you need and beat the final boss — a solid challenge. I expect to see people do runs where they forgo every item and weapon in the game, much like the Soul Level 1 runs that people in the Dark Souls community do to make the rest of us look like idiots.

For those who prefer a more comfortable run at things, you can turn off the beat matching, and enemies will only move when you move, giving you time to think out what you want to do while still enjoying the discovery and exploration that is at the heart of the game. The difficulty is well designed, and the game seems to have been made to appeal to people of all ages and skill levels, which is nice to see for a system with such a broad user base as the Switch.

As you play, you also collect diamonds and gems that allow you to purchase items from shops. Items bought with diamonds will stick around after you die, while items bought with gems will be lost. It enables you to make progress each time you play, even if you do find the game very difficult but don’t want to make it easier on yourself. It is this element that makes Cadence of Hyrule the perfect game for those shorter play sessions. Have ten minutes to kill? Just fire it up and earn a few diamonds.

Frankly, I have nothing negative to say about Cadence of Hyrule, and I have enjoyed the 15 or so hours I have put into it so far immensely. There is enough Crypt of the Necrodancer and Legend of Zelda here to keep fans of both happy, but the rougher edges of both have been worn down to provide us with a more accessible, quick hit of entertainment. It’s a great game, with some attractive design, and if you have been thinking about getting it, then I would highly recommend it.