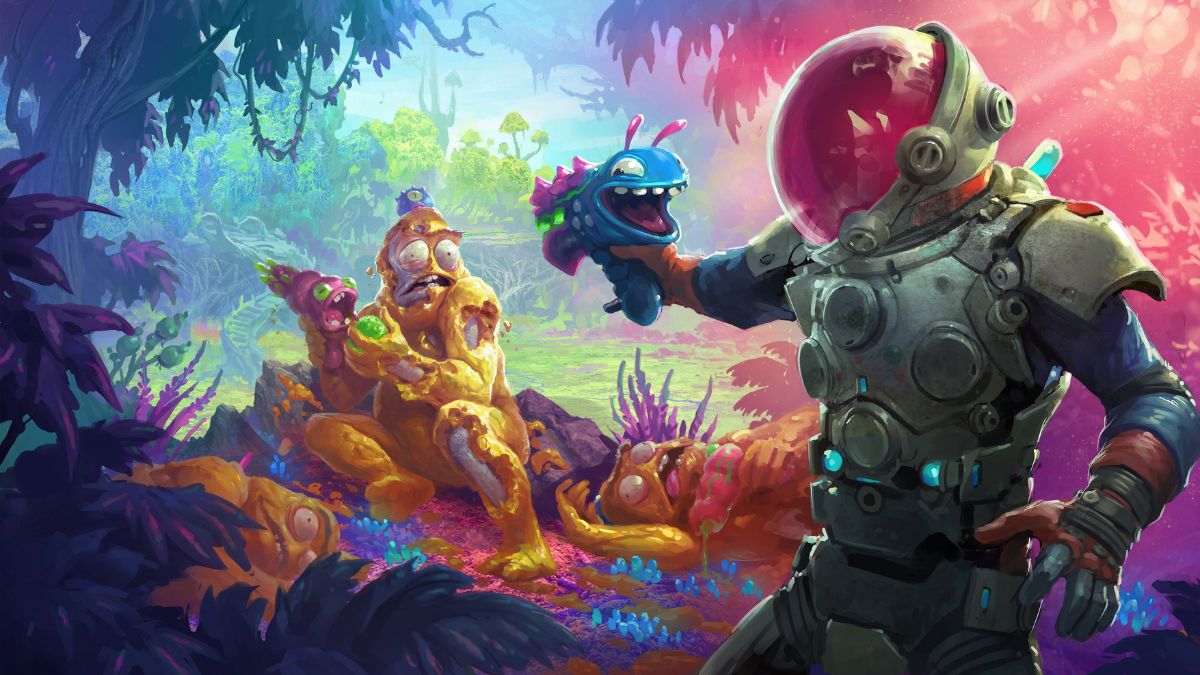 High on Life, the latest attempt at a game from Justin Roiland and Squanch Games, is a satirical high-octane shooter that’s more than aware that it’s a game. This is a world where none of the characters are afraid to tell you that they don’t matter, because the world itself is a simulation. It’s a particular style of comedy that’s typical of Roiland’s work, and while High on Life brings it halfway, it feels like it’s missing its better half. The thrill of talking guns and NPCs with a dark view of life doesn’t last extremely long, but the game features quirky gameplay mechanics that more than makes up for Roiland’s dry story and repetitious humor.

Bounty hunting in a vast universe

Your nameless character in High on Life leaves Earth after an invasion from the G3 Cartel, which discovers that they can smoke humans as a drug. Soon after, you’ll jump into a bounty-hunting suit to start taking out the different cartel bosses as revenge for taking over your planet. From this point forward, you are in for a crazy ride, characterized by sentient weapons that aren’t afraid to tell you how they feel about your gameplay style.

High on Life has a fairly similar loop to games like Halo Infinite. You blast your way through different forms of enemies, kill bosses, and use different tools to your advantage. There is even a weapon that functions like Halo’s Needler but with the ability to slow down time — which is pretty rad, if you ask us. When you ignore the whiny Morty-soundalike gun and focus solely on the shooting, High on Life is a blast, with tons of secrets, amusing side elements, and constant battles. There are even times when a seemingly unnecessary item like a volleyball proves useful when it ends up as your free pass to get past some sporty enemies, for whatever quirky reason.

Your bounties and missions will take you to many different planets, with each having a unique feeling. On these planets, you’ll discover different alien races with distinct personalities and styles, like these depressed Care Bear-looking creatures I encountered on Zephyr. If the team at Squanch Games excels at one thing, it is crafting a world that stands out from anything you have ever played.

Self-aware, to a fault

Too much of a good thing is always bad. The comedy in High on Life is trying to encapsulate the humor and self-awareness of Rick and Morty with only half of the show’s creative team. While the game does have its great moments, like giving you a darkly humorous achievement for killing an alien child (in a rebuttal to Bethesda titles) or allowing you to wield a murder-obsessed knife that is childishly named Knifey, a good portion of the comedy comes from a gun who sounds like Roiland’s famous character Morty without all of his anxiety and a lot of his attitude.

When you first meet the characters, they all come across as hilarious, and the shock of a new experience can make anything great. But eventually, hearing enemies groan nihilistically, coupled with the improvisational tone from each character’s voice, grew tiresome and half-baked.

Roiland’s comedic sensibilities naturally invoke a fear that the guns in High on Life would talk too much and become an annoyance. Personally, I didn’t find the guns annoying in gameplay and found that they actually added to the combat. Even so, the self-aware humor ended up distracting from NPC dialogue. For example, Kenny has a bad habit of re-explaining every direction an NPC gives you, treating you like a child discovering your first M-rated game. It often felt like the guns had to have the last laugh and couldn’t leave well enough alone, which ultimately hurt the game.

High on Life features unique gameplay and character designs that make this game feel like a psychedelic experience as much as it does a shooter. Along the way, gadgets will enhance not only your capabilities but add to the fun as well. The amusement of experiencing something new and unusual has a certain novelty to it, but High on Life ultimately ends up feeling stale after enough tedious blathering from stock Justin Roiland characters. At least you can take solace in knowing that most of the game is probably a drug-induced trip in a larger reality that may or may not be a simulation — but who cares if it is?