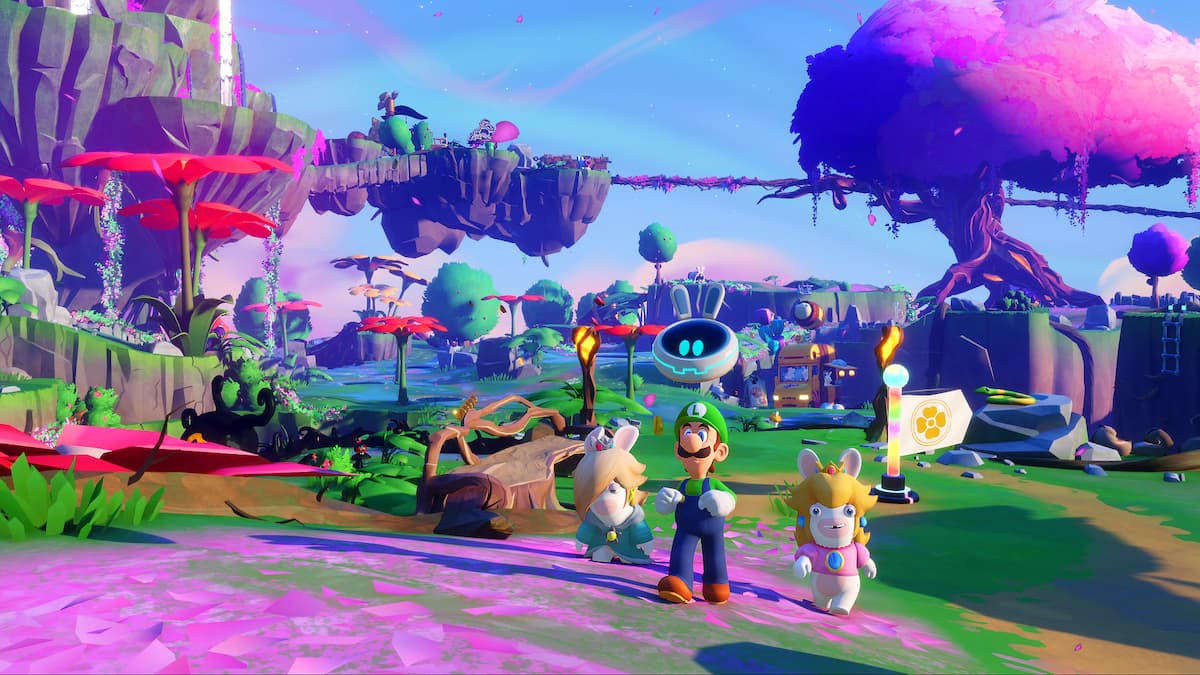 Mario + Rabbids: Sparks of Hope is one of the most freeing video game experiences I’ve had in ages. There are infinite ways to win a battle, thanks to both the new free-form tactical system and the lovable Sparks. There are tons of quests to complete and secrets to uncover across each planet’s open world. These two halves combine for a whole experience that takes everything that was good about the original Mario + Rabbids: Kingdom Battle and pushes it to the next level, in ways that any player ought to love.

Mario + Rabbids: Sparks of Hope is one of the most freeing video game experiences I’ve had in ages.

The adventure begins in the Mushroom Kingdom, the perfect place to get acquainted with the game’s overworld controls and how missions work. The idyllic scene is soon interrupted by the evil Cursa, whose identity has sparked a lot of fan theories. The initial scuffle kicks off a quest to reach Cursa’s home planet and stop evil at the source.

This can’t be done without visiting other planets along the way, and each one has its own delightful design. The initial Beacon Beach is a typical island paradise, but with a series of catacombs hidden beneath the sand. Even Palette Prime, which appears to be a basic town next to a forest, has some surprising decorations like a Chinese dragon hanging out the river. These colliding ideas make each planet feel exciting, spicing up what would otherwise be basic ‘ice’ or ‘castle’ levels.

Of course, the planets are also littered with Darkmess (not a typo) — these are piles of goopy tentacles and eyes that ruin the scenery and block your progress. It brings rain to the beach, drains the color from the forest, and creates obstacles along the path to your main objective. These planets feel so much more fleshed out than the basic overworlds found in the previous game. There’s a sense of discovery as you complete side quests and solve the light puzzles found on each level, earning coins, items, and experience along the way.

Whether you bump into an enemy or initiate a specific combat challenge, you’re going to be spending a ton of time engaging in Sparks of Hope’s battles. To reuse a word, they are indeed engaging. Gone is the grid from Kingdom Battle, replaced with a free-form movement system that lets you move without restriction in an allotted space. You can vault over cover, dash through enemies, and bounce off of teammates’ heads, stopping only after you’ve fired your primary weapon.

I felt like I could do so much in a single round, and there’s real freedom in that. Each member of your party has two action points, which can be used to attack regularly, unleash a special move, activate a Spark powerup, or consume an item. You can freely switch between all active party members as you do so, to the point where it almost feels like cheating. On numerous occasions, I moved a party member several times so that they’d be close enough to receive a buff or catch more enemies in an area-of-effect attack, often in the same turn. Many battles can be won in a single round, which is a great reward for the smart use of the tools at your disposal. Sometimes the non-story-quest battle maps can be a little less exciting, so it’s also nice to be able to get things wrapped up quickly.

Whether your goal is to beat all the enemies or reach a certain point on the map, you have the same abilities at your disposal. Every hero has their own signature weapon, from Mario’s dual pistols to Luigi’s sniping bow. They also have unique special abilities: Rabbid Peach can heal the party, regular Peach can shield them from damage, and Bowser has a particularly handy set of Mechakoopas that seek out the nearest enemy. He’s one of three new additions to the roster, alongside the sword-wielding Edge and the sleepy Rabbid Rosalina, who can lock enemies in place with her special move. Yoshi might be sitting this one out, but the new trio of heroes is a fine tradeoff.

The Sparks are the biggest additions here — they’re in the game’s name, after all. These are fusions of Ubisoft’s Rabbids and Super Mario Galaxy’s Lumas, granting new powers to our party members. Just like each world has interesting twists, the Sparks go beyond basic fire, water, and electric boosts. They can also unleash waves of poison and rain down meteors, and a personal favorite renders its user invisible for a few rounds, letting them attack without being targeted back. In keeping with the theme of freedom, the Sparks can also be exchanged between heroes in the menu to help you find complementary loadouts.

There’s a wonderful synergy to the Spark powers, opening up the battles to even deeper strategies. Activate Mario’s Hero Sight ability, bounce another enemy into the air with a water Spark’s splash damage, and you’ll get that extra attack from Mario as they come into his field of view. Of course, your enemies can also harness these elements, so knowing which foes are resistant to elemental damage ensures you don’t waste any ammo on them. You can’t always blow through a battle in one round, and the challenge is appreciated, especially in boss battles that introduce special mechanics like explosive barrels and oversized enemies.

For as deep as these battles can get, players also have the option to tone things down. Sparks of Hope offers three different difficulty settings, as well as a range of options to reduce enemy damage, increased XP gained, and even turn on straight-up invincibility. These accessibility options ensure that anyone can enjoy the game regardless of their specific needs, age, or strategy experience.

Switching over to a free-moving battle system has worked wonders for Mario + Rabbids. It’s added a new level of depth to combat by letting players experiment more with placement and line-of-sight, and the addition of Sparks means there are increased layers to the strategy and synergy of each battle. This freeing feeling carries over into each planet too: each one feels akin to a self-contained RPG, with side quests to complete, mini-dungeons to explore, and enemies to beat. Secrets and diversions like coin collecting give further incentives to explore each one.

Ultimately, Mario + Rabbids: Sparks of Hope is a game about taking the leash off and letting the player run free. There are so many options for upgrading and equipping your characters, and battles feel more than balanced — only once or twice did I ever feel the need to restart a fight, and even then it was due to my own strategic error. On top of that, all players can make use of the difficulty and accessibility options to help them complete the quest and confront Cursa. That’s a winning strategy for everyone.