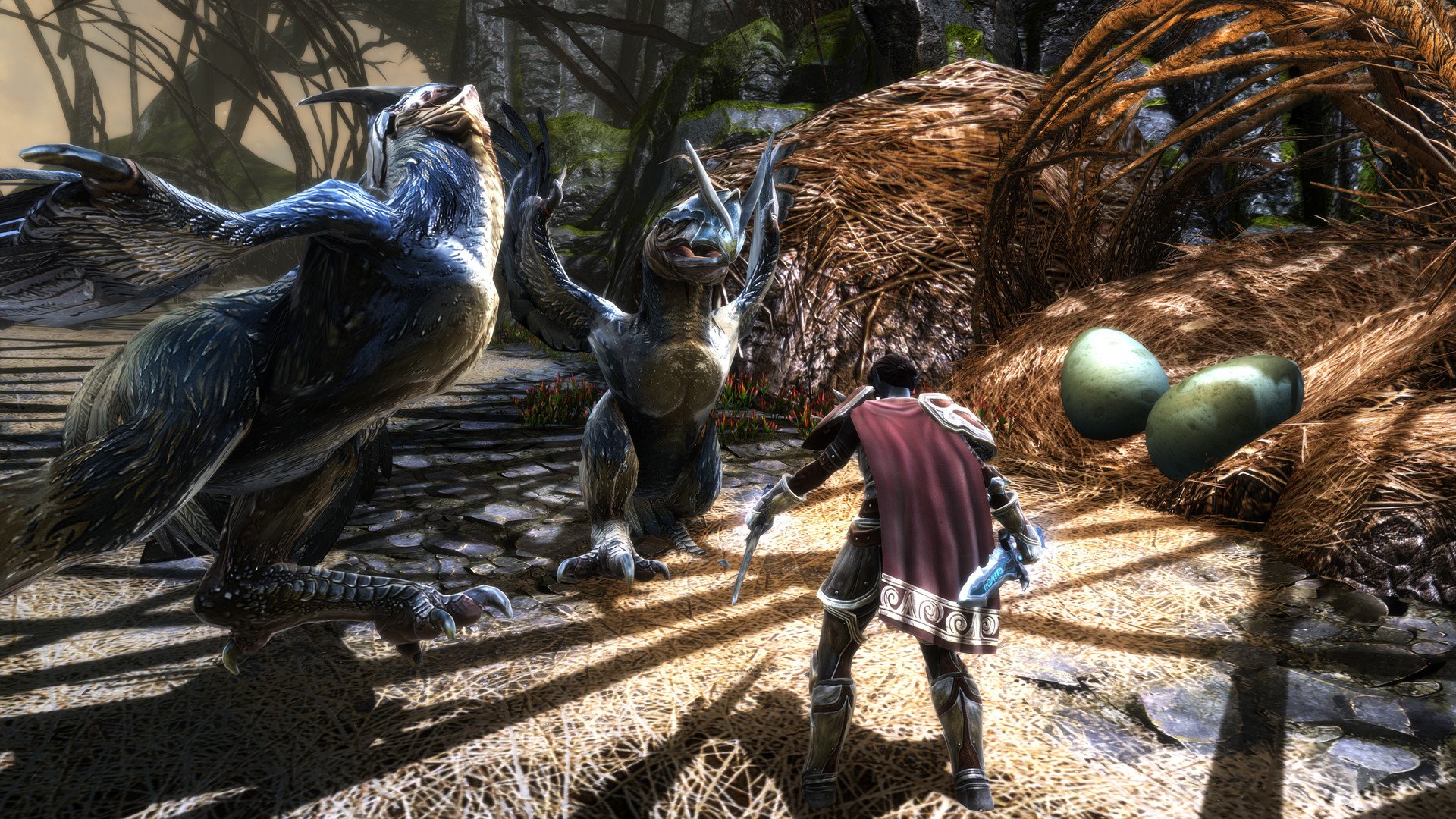 I’m one of those people who felt that Kingdoms of Amalur got something of a raw deal the first time around. While not groundbreaking, the game was a lot of fun thanks to the combat, and I found it engaging enough to put in two full playthroughs before moving on to something else. I was also sad to see how the aftermath of release played out for 38 Studios and Big Huge Games, a mire of legal acrimony, and eventual bankruptcy. We always want a little more for the games that we like, and we hope the people who make them are treated well while doing so. At the time, it seemed Kingdoms of Amalur was done for, and would never see the light of day again.

Fast forward eight years, and Kingdoms of Amalur: Re-Reckoning is on the horizon. The remastered version of the game includes all the DLCs, and there is even a new DLC in the works. Fans can once again run through the 100+ hour game. It’s a rare “phoenix from theashes” moment, but does this particular bird have wings?

As much as I enjoyed Kingdoms of Amalur when it launched, the game can be accused of not entirely living up to expectations, despite the raw talent involved with the project. Written by R.A. Salvatore, a man who has penned dozens of novels in the Dungeons and Dragons setting, the story failed to shine or bring anything new to the table.

Your character awakens from death thanks to an eldritch device called The Well of Souls. As a result, you now exist outside the bonds of fate and can change destiny. This makes you something of a wildcard in a world where the ever-turning wheel of fate will eventually break all those who spend their time upon it. So far, so traditional, as fantasy stories rely heavily on protagonists destined to do things, or utterly unfettered by destiny but end up doing things that were destined to happen anyway.

You explore a world filled with peril, tropey fantasy races and creatures, and lots of magic. It should be noted that everything is polished to a very high degree, and the lore and characters can be exciting and fun; it has simply all been done before. Nothing much changes here in Re-Reckoning, as this is a remaster, not a rework.

There is a big evil and a selection of smaller evils, and it is up to you to smack them all around and inject some sense into the insane shenanigans that they are all trying to get up to.

What shone in Kingdoms of Amalur was the combat. Far more action-oriented than many similar games, you slide across the screen unleashing vicious combinations on groups of enemies. With three main skill trees that dictate your character progression, you can become a fearsome fighter, a slick rouge, or a powerful wizard. There has been some tweaking under the hood to all three classes, bringing more balance between them. A flaw in the original was that the caster felt like the clear winner by the end of the game, nuking groups of enemies with ease.

The three classes are bound to the Might, Finesse, and Sorcery skill trees, but the game also made it incredibly easy to customize your hero and even change your entire skill tree. Destinies add a pointy tip to the sword that is your build, allowing you to lean into a singular skill tree to gain unique benefits. The Might Destinies tend to make your tankier, while the Finesse Destinies lean heavily into crits and burst damage dealing. A visit to a Fateweaver will allow you to reset your character and build them again, and you can throw on suitable armor and weapons and be a whole new class with ease.

This safety net allowed people to experiment, and thankfully all of this is intact in Re-Reckoning. If this is your first time playing the game, feel free to explore your options, as your decisions never trap you. You can also mix and match, allowing your heavily armored fighter to be a deft locksmith or your wizard to be a mean shot with a bow.

Combat remains fluid and fun but lacks a couple of fixes that I would have loved to see. Enemies have a habit of following you on dodges, landing their arrows and spells no matter what you do. It doesn’t happen often enough to be game-breaking by any means, but it’s a sad wrinkle in the otherwise smooth and still enjoyable combat system. I also feel the game would have benefited from adding a soft lock system, but most players should rapidly adjust thanks to the improved smoothness of the camera controls.

One extremely welcome change is being able to hotkey more of your abilities in Re-Reckoning. Only having four hotkeyed abilities was always a failing in the original, a seemingly needless limitation in the face of the breadth of options elsewhere.

What’s in a remaster?

The big question for most people will be around what has changed in the game, and this is where things will get contentious for a lot of players. The answer depends entirely on what platform you played the original game on. On PC, there is superwide support, FOV sliders, and other essentials, but much of this is something you may have already experienced thanks to mods.

Visually, little has changed concerning textures and particle effects, but the increased resolutions and framerates will certainly shine if you have only played the game on consoles. I cannot overstate exactly how visually impressive a jump in resolution is for any game, and I regularly joke that someone jumping from a 1080p monitor to a 1440p display will instantly remaster their entire gaming library. Re-Reckoning pretty much proves my point; while the changes are not dramatic, the original game’s art direction and visuals were all centered in that timeless cartoony RPG style that tends to age well anyway, and they benefit greatly from a resolution bump. If you have only played Kingdoms of Amalur on PlayStation 3 or Xbox 360, then you should find the improvement in performance, resolution, and framerates to be quite enjoyable.

Kingdoms of Amalur: Re-Reckoning is a remaster that seems to barely skate by in places, relying on the original game’s strength. The fantastic music, fun visuals, and engaging combat didn’t need a huge amount of work, as the game is only eight years old. However, as a fan of the game, it is still hard to play and not wish that a little more had been done.

Adding to the complexities of deciding to buy for many players will be the fact that the game enjoys a discount for previous owners on Steam, coming in at 50% off, and you can combine that with a 10% launch discount. Console players will not be able to take advantage of this discount, unfortunately.

The biggest standout here is that this game was released in a pre-Witcher 3 world and is being remastered after RPG gaming, mainly writing, has gone through a shift. Fans of the first game will almost certainly enjoy this trip down memory lane, but it feels much older than it is when it comes to the storytelling.

All that said, I enjoyed my time with the game, but how much of that is nostalgia and how much of it is because of the remasters somewhat shallow efforts to improve the game is difficult to tell.