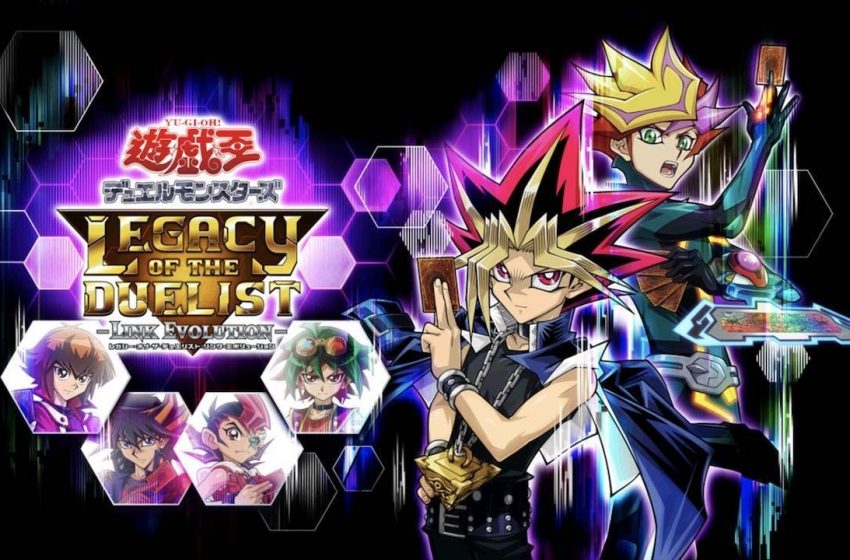 Yu-Gi-Oh! Legacy of the Duelist: Link Evolution is the typical new coat of paint with a few tune-ups that fans of the series will love to have with them on the go.

For Yu-Gi-Oh! Fans, there hasn’t been a good chance to play the game traditionally on the go since Yu-Gi-Oh! Zexal World Duel Carnival on Nintendo 3DS back in 2013.

After releasing so many excellent Yu-Gi-Oh! Titles on PlayStation Portable and DS, Yu-Gi-Oh! Legacy of the Duelist: Link Evolution is the perfect fit for the Nintendo Switch.

This game is essentially a re-release of the original Yu-Gi-Oh! Legacy of the Duelist that has been out on PlayStation 4, PC, and Xbox One since 2015. Konami put a lot of work into supporting the original title, releasing dozens of DLC packs to add new cards and challenges for players to duel through.

Link Evolution is the culmination of all of that DLC, combining it all and reworking it into the main game. This added an entirely new chapter to the campaign, over 1,000 new cards, and the addition of Link Monsters.

Fans of the various Yu-Gi-Oh! Anime can enjoy running through classic battles in several different ways.

Link Evolution has five full campaigns, spanning from the original Yu-Gi-Oh! Series to the end of Arc-V. Arc-V was included in the original game, but not in its entirety. There were only a handful of duels and very few cards from that era of the game available without reaching into the DLC, which added a lot more.

This time around, Yu-Gi-Oh! VRAINS is getting the Arc–V treatment, with only three missions in the campaign and a single Booster Pack that holds many of the archetypes from that series. That is where you will find most of the Link Monsters and support cards for that style of play.

Pound for pound, this is probably the complete way to enjoy running through the story of Yu-Gi-Oh! OG fans can enjoy playing with slightly altered decks for classic characters like Yugi Moto and Seto Kaiba as they experience essential moments from the shows.

Every time you win a game, you will receive cards, player icons, challenge decks, and DP – the in-game currency. Some of these rewards will change based on your performance in the duel, so that provides a little bit of replay-ability.

Once you beat a duel, you can also replay that match playing as the opposite side in a Reverse Duel. This will give you different reward cards and other goodies for replaying story missions.

You don’t need to use the provided decks either. As soon as you beat the initial tutorial, you will always have the option to choose any deck saved in your creation menu before a duel begins. So if you have a set of cards you want to play with and create your version of the story, you have that power.

There are upwards of 9,000 cards included in this game, dating to as recently as November 2018. That means there are nearly four years’ worth of cards in this game that wasn’t in the original

Focusing mainly on Arc-V, Pendulum cards now have almost all of their basic support in the game and players won’t need to worry about lacking in resources for their favorite archetypes. I was pumped to see all of the Black Luster Soldier support I love available in-game for the first time and focused on building that deck early.

However, that is where the one drawback of the card system in this game hits. DP isn’t hard to come by if you are like me and play through story missions and then go back and do the Reverse Duels too. But I still was running out of currency when buying packs because duplicates are everywhere.

If a card isn’t Banned, Limited, or Semi-Limited on one of the official Yu-Gi-Oh! Ban lists you can have a maximum of three copies of that card in your deck. So using the Blue-Eyes White Dragon as an east example, three of that card is a deck’s cap, so you only need three copies in total.

But just like in the original game, buying a pack after you have three copies of a card doesn’t eliminate it from the pull list. So you could keep pulling a Blue-Eyes in every pack, limiting what other cards you get.

So, for me, since I wanted to build a deck around Black Luster Soldier, I needed to start using my DP on the Yugi packs in the Card Shop. Each pack costs 400 DP, and you usually get a minimum of around 1,500 DP for winning a duel in story mode.

By the time I had a workable Black Luster Soldier deck, I had poured over 40,000 DP into a single pack because I still needed more of one card or still hadn’t gotten something. I am still sitting at 298 out of the 314 cards in the Yugi set at the time of writing this.

There isn’t a way to get anything out of those duplicates either. The game doesn’t have anything like Overwatch’s system where you get currency for extra copies, and your deck box only keeps three of them anyway, so there is no way to track how many of one card you have pulled over three.

I swear I have about 32 copies of Switch Gaia the Fierce Knight while still looking for my third copy of Super Soldier Ritual.

But at least the variety keeps me happy while grinding for more DP. Using decks of cards, I have never experienced before keeps duels fresh and makes them less tedious.

Link Evolution brought back several amazing modes outside of the campaign for players to enjoy.

My personal favorite is the Battle Pack mode, which allows players to use build decks through various methods of drafting. Opening card packs and making decks out of whatever is inside is something friends, and I used to do all the time at local card shops, so being able to do it whenever I want is so much fun.

You do need to pay DP to use that mode, but the entry fee is more than worth it for all of the random fun you are going to have, especially since you get to keep the cards after you play all your matches too!

There are also Duelist Challenges where you go back and compete against harder versions of characters you have beaten in story mode. This is another fun way to get a nice challenge while grinding some DP.

Lastly is the Multiplayer mode, which features three different options.

The simplest is Local Match, which is just an easy way for players who are sitting next to each other to duel without needing an internet connection. There is also Player Match, a mode that lets you join or create a room for others to join and duel. A Random Match option is also included if you just want to pair with anyone looking for a no-risk contest.

Carrying over from the original game, Link Evolution also has a full Ranked Match mode. This will feature the best players who have the game competing for top spots and a continually updating leaderboard.

If you feel confident in your deck building skills and want to test your mettle, jump on in. The matchmaking is straightforward and rarely lags since the game is not very taxing. I played several random and ranked matches and didn’t experience any lag, only one player trying to time me out by waiting for the last second to end their turn.

This game has a lot of tutorials that are essentially mandatory for anyone who hasn’t played the game in a few years. I jumped out when Pendulum summoning was making its way into the game and decided to learn how it worked.

By the end of the tutorial, I got the basics down, but for someone who might have been out of the game since Yu-Gi-Oh! GX ended, they will have to sit through at least a dozen tutorials to get a grasp on a fraction of the game’s inner workings.

All the breakdowns are detailed and very helpful; it is just going to be a time sink for newer players who want to learn how to play.

For veterans though, this game is simple to jump into, and you will be running through matches as soon as you get control of your deck. There is also finally a way to skip annoying dialog prompts from Trap Cards and the like.

For the longest time, if you had a card like Jar of Greed or Mystical Space Typhoon, the game would ask you after every action if you wanted to activate it. It would get so frustrating at points that I would take cards like that out of my deck to save time.

Now you can hold down the B button and it will auto-cancel those prompts. You can let go of the button or hit X at any time to check the field and activate it as a response, but this change makes things run so much smoother.

I love Yu-Gi-Oh! Series and this game is a perfect show of why.

I get to go back and experience the plot of the old shows while using the character’s or my decks as I do so. It hits all the right nostalgic spots for me when I play my favorite cards while also providing new waves of excitement as I open packs and build new decks.

Throwing together a deck for Battle Pack duels is a great way to get a challenge every time, and since the game is on Switch, I get to waste my breaks away dueling. Because of the ease of access that the Switch brings, a few friends have already reached out about dueling thanks to the online features.

Even though VRAINS is likely going to be getting the Arc-V treatment with new content coming as paid DLC and the annoyances I have with how purchasing packs works, the base package of this game and the sheer joy it brings is more than enough to justify a purchase.

If you want to experience Yu-Gi-Oh! again by taking a nostalgic trip through the Anime plots using old cards or want a card game to get into for a few hours when you have some time, this is worth a look at $40.