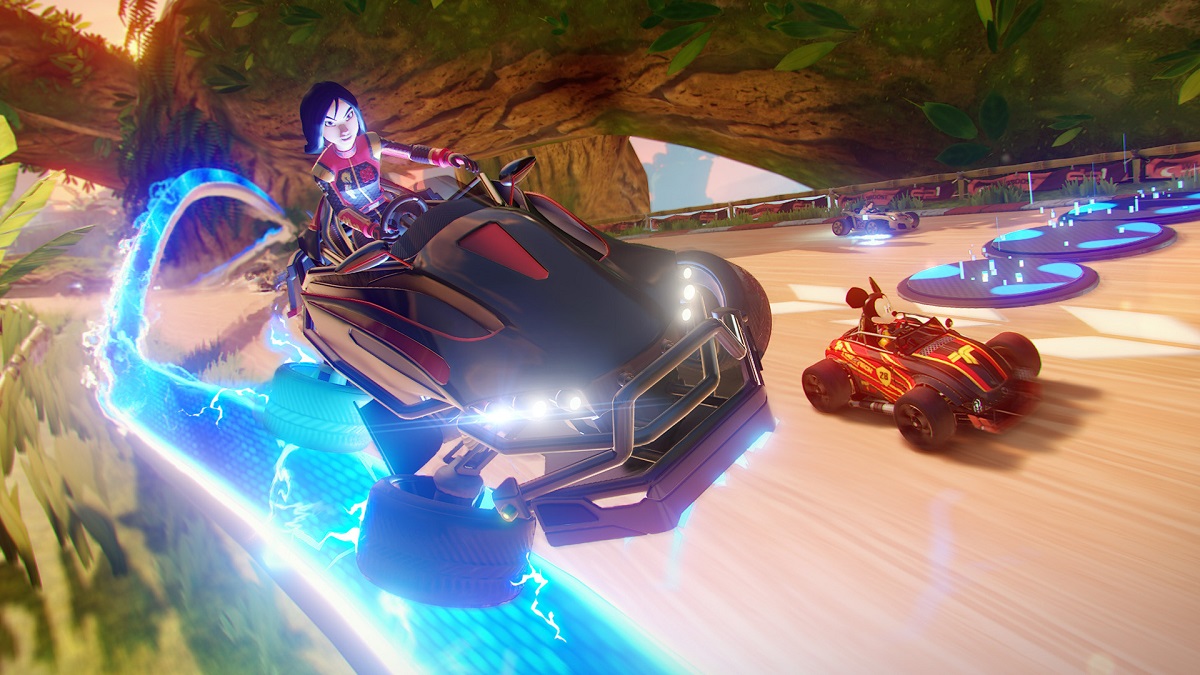 Disney Speedstorm is a kart racer brimming with potential. Its gorgeous graphics are inspired by the classic Disney worlds we know and love, and it boasts smooth controls that sit right between Team Sonic Racing and Mario Kart 8 Deluxe in terms of quality. But there’s a major problem with Disney Speedstorm: like Donald in an angry fit, I’m infuriated by the microtransaction system bogging everything down.

Traditionally, publisher and developer Gameloft has only made mobile titles. Many of the same systems you’re used to (including the aforementioned microtransactions) have been brought over. Characters level up from the resources you collect in the game, and when you play online, others will have better stats that will make them faster and tougher to beat. It’s demoralizing when you are in last place and have no way of getting back up top, no matter how hard you try.

These resources can be found by spending your money in the game, leading to a pay-to-win scenario. Disney Speedstorm is still in its beta phase, so I hope that the full game’s matchmaking accounts for the upgrades you have on your car or how evolved the characters are. Better matchmaking would hopefully lead to less of a feeling that you need to spend money to compete.

What doesn’t help the situation is the lacking pool of items that are available in Disney Speedstorm. Pick-ups like the red saw blade and the purple arrow that flips the screen of opponents are neat in close-ranged encounters. However, there are no items that give you a tool to use from long range like a red or blue shell in Mario Kart 8 Deluxe in the current build for Disney Speedstorm. Again, once you’re behind, you’ll stay there as you have no way to cause trouble to faraway opponents.

It’s also disappointing that the items are generic and not at all inspired by Disney films and TV shows. There isn’t any pixie dust from Peter Pan to make you fly, throwable Nacos from Kim Possible, potions from Yzma that turn you into an animal, pots and pans from Beast’s castle, or cakes from Alice in Wonderland to make you large. Gameloft could have stretched its imagination and impressed Disney fans with some unique items from the history of the House of Mouse.

A solid foundation, despite its issues

The lack of creativity and focus on microtransactions are unfortunate, but Disney Speedstorm does do a few things well. All of the characters are well-animated within the menus and showcase their personalities while in-game. That said, it would be nice to have a few more voice lines from the whole cast as they didn’t speak often throughout each race.

Also, even with the underdeveloped weapons, the devs do have one neat idea for that aspect of the game. If you hold down the button to use an item, you can initiate an alternate fire mode. For example, you can either use a shield to protect yourself or use it to attack everyone around you.

The highlight of Disney Speedstorm though is the tracks. They’re deeply inspired by the original movies and stand in stark contrast to how basic the items are. Hera’s Circuit is on top of Mount Olympus and features some beautiful gold Greek architecture among the cumulonimbus clouds. Meanwhile, a track called the Silver Screen brings back the classic era of cartoons with black and white imagery and a dock that has a bouncing section of roped bridges. There’s so much character shown within each track, and it will be exciting to see where Gameloft will take us next.

Despite some stunning tracks, the music that goes along with each course can be hit or miss. Disney Speedstorm takes a bit of dubstep and mixes it with classic songs from Disney’s library. A remix of “The Gospel Truth” from Hercules is used in Hera’s Circuit, but the beat and lyrics don’t quite sync up throughout. The vocals from the song also feel overwhelmed by the heavy electronic vibe around it. Meanwhile, the way that The Village’s theme uses Mulan’s“I’ll Make a Man Out of You” is refreshing and funky as only the melody is used.

There’s a solid foundation within Disney Speedstorm, thanks to its decent controls. Despite the lack of vibration feedback from drifting, turning around corners and accelerating at quickening speeds feels great. There’s even a Burnout-like feature that has you bashing other racers into the side of a course. The track design also excites with turbo boost spots, ramps that lead you to higher areas, and blue pipes that you can ride along with your anti-gravity wheels.

Overall, Disney Speedstorm has potential, but like the Seven Dwarves, a lot of work needs to be done. The microtransaction system makes the game pay-to-win at the time of writing for the multiplayer modes, but thankfully, you can play the game offline with its Adventure Map mode, which gives you rewards when you win events. There are problems, but this game controls well, and the tracks are a standout aspect of Disney Speedstorm. We also like the variety of Disney characters available in the game from The Jungle Book to Pirates of the Caribbean.

Disney Speedstorm will be available on PS4, PS5, Xbox One, Xbox Series X/S, Nintendo Switch, and PC (via Steam) later this summer.