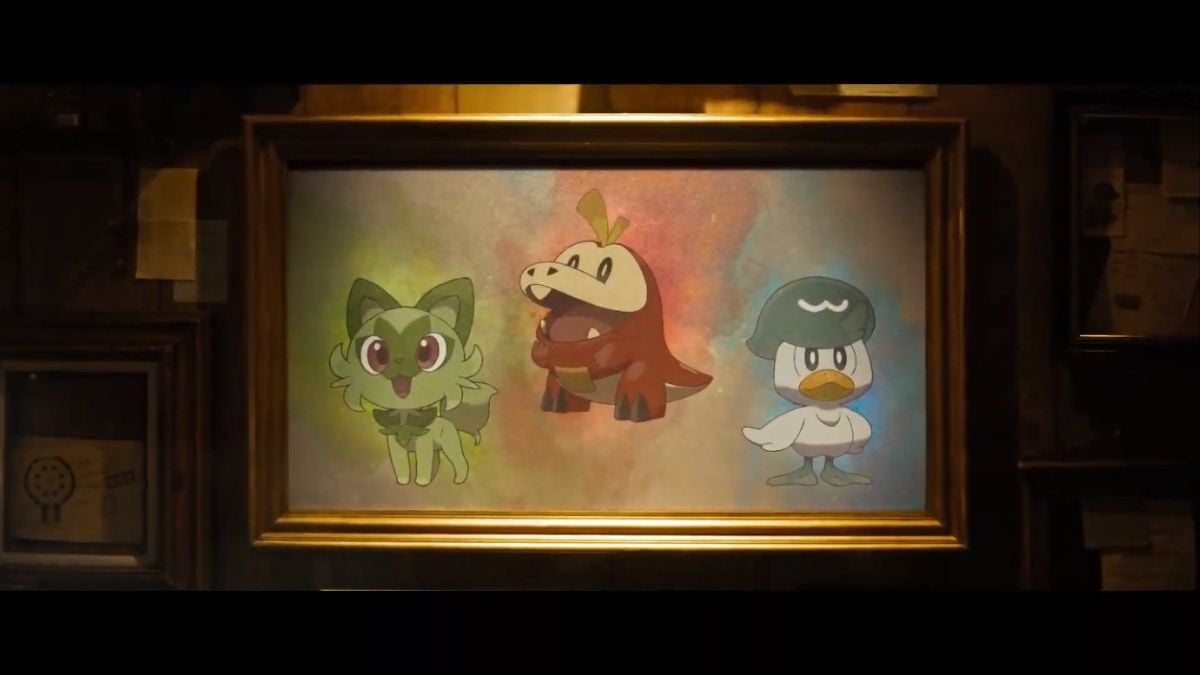 We got our first look at the new starters for Pokémon Scarlet and Violet, and fans are already theorizing what the final evolutions will be for each. All three starters have become instant fan-favorites, with many finding valuable traits in all of them. However, their final evolutions will often make or break them. I’m personally still upset with Sobble evolving into Inteleon. We will go over our own predictions and theories, but it should be noted that this is speculative and shouldn’t be taken as fact.

The grass cat Pokémon Sprigatito has already taken the hearts and minds of cat-lovers everywhere. Sprigatito’s name comes from the words sprig and gatito, the latter of which is Spanish for kitten. Sprigatito appears to be based on a house kitten and maybe an Iberian Lynx. The Iberian Lynx is an endangered species of wild cat native to Spain. Sprigatito’s evolutions may end up looking closer to the Lynx.

Related: Where is Pokémon Scarlet and Violet set? – region info and where it’s based on

The Lion is a big symbol for Spain, with a Lion featured prominently on the Spanish Flag. Lions often symbolize bravery and are some of the biggest cats in the wild. Sprigatito may end up evolving into a giant Lion, with a flowery bush as a mane.

Fans are hoping that Sprigatito remains on all fours and doesn’t pull a Litten. However, there is a real possibility that Spirgatito will evolve into a bipedal anamorphic cat. There have been many myths and stories of human/cat hybrids throughout the world, so it isn’t completely unreasonable to believe that Sprigatito may evolve into one.

With its endearing face and chunky body, people have completely fallen in love with the fire croc Pokémon Fuecoco. Fuecoco’s name is a mix between fuego and cocodrilo, the Spanish words for fire and crocodile respectfully. Fuecoco’s body is the shape of red pepper, which may mean its evolutions may follow that same theme.

Related: Who are the starters in Pokémon Scarlet and Violet?

Fuecoco is the first fire starter Pokémon that doesn’t follow the Chinese Zodiac theme that previous starters had been following up to this point. Fuecoco’s evolutions may take a more slender and long appearance to make it appear more like a serpent. The snake is still one type of animal on the Zodiac that hasn’t been a fire starter, and there are long and thin spicy peppers that do look like snakes/serpents.

Fuecoco’s white face looks like a skull, possibly hinting that Fuecoco will evolve into a ghost-type Pokémon. The skull face will match face paintings as seen in Day of the Dead festivities, which is a type of Central American celebration. Even though Day of the Dead is Aztec in origin, Spain’s huge influence in Central America is still tangible enough to justify a potential Day of the Dead connection with Fuecoco. Fuecoco may end up evolving into something similar to Dragapult — a ghostly lizard that floats in the air, possibly with a slender body and short limbs.

This Donald Duck lookalike is a favorite among fans of adorable Pokémon and Kingdom Hearts. Quaxly’s name comes from the word quack, which works ‘cause it’s the duck Pokémon. Given its sailor-based design, Quaxly’s evolutions could follow a similar theme. Sailors are usually low-ranking Navy officials aboard a watercraft. Every time Quaxly evolves he could earn a rank, becoming a Captain in its middle stage and then an Admiral at its final stage.

Related: Pokémon fans campaigning for Scarlet and Violet to be localized in Portuguese

Quaxly could also evolve into something that goes rogue. A lot of real-life pirates are ex-seamen who turn their backs on society for a life on the high sea. Maybe Quaxly will get an eyepatch and black hat, and evolve into a water and Dark-type pirate duck.

A common theory floating around is that Quaxly could evolve into a Don Quixote-like Pokémon. The reason why this theory is prevalent is that Quaxly and Quixote start with “Qu,” and a pun with Quixote’s name just writes itself. Quixote, who is a fictional character from the Spanish novel of the same name, is a knight-like figure. Quaxly has a chivalrous look in its design, so it isn’t too farfetched if Quaxly evolves into a Spanish Knight. Don Quixote is an iconic character in Spain, often considered to be the first modern novel, so it makes sense for Pokémon to reference it in the Spain-based region.