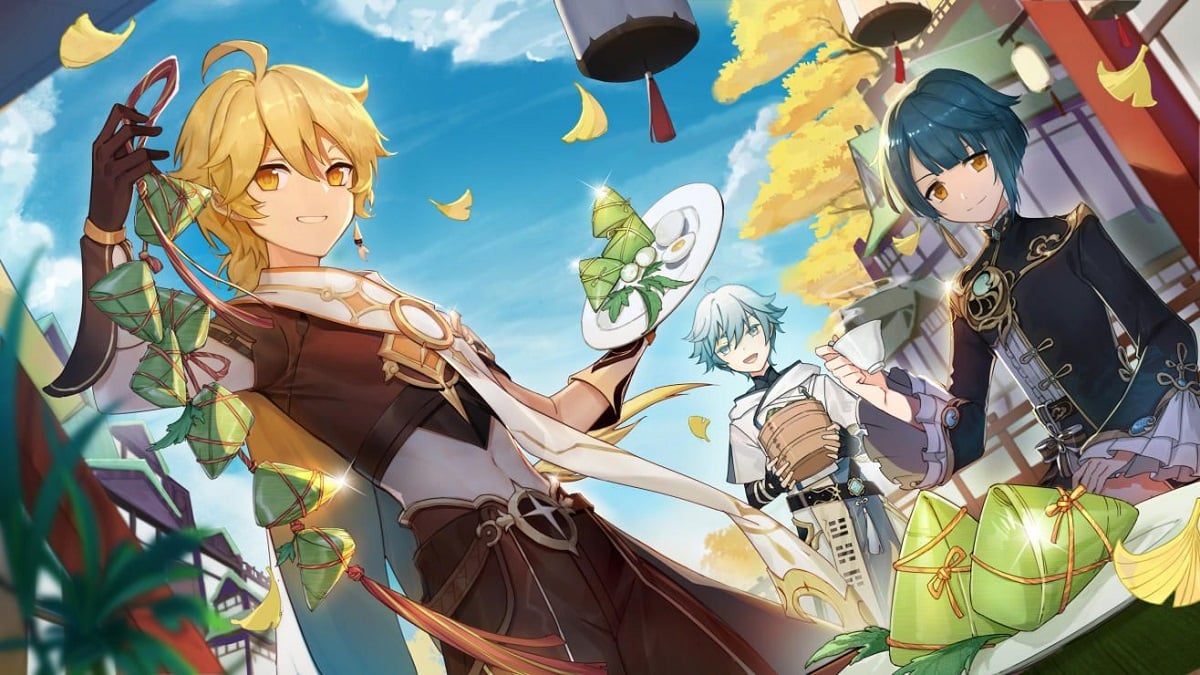 Image via Wallpaper Cave and MiHoYo

Genshin Impact is known for its anime-inspired beauty. The city of Monstadt, for example, looks majestic with its grand cathedral and blissful sails spinning in the wind. The characters are also beloved by many around the world, thanks to their unique designs and likable personalities. Mix them together and you have some amazing Genshin Impact wallpapers and backgrounds. Here are 10 of them you can find on the internet.

The beginning of Genshin Impact

One of the most fantastical imagery from Genshin Impact’s release is this image from the developer MiHoYo. You see the main protagonist Aether looking at the majestic beauty of Mondstadt, which is surrounded by the open world you can explore in the game. We wish we were sitting there as well. Here’s the image URL from the press kit on IGDB.

The default wallpaper for Genshin Impact

On the PlayStation version of Genshin Impact, there’s an epic image that appears before it starts. It has the fan-favorite Venti, leading the party with Stormterror in the background. Diluc, Aether, and Jean are also ready to battle if need be. We’ve found a version with the logo on it from Wallpaper Cave.

Aether, Chongyun, and Xingqiu hanging out in Genshin Impact

There’s nothing better than a group of happy friends, and when you boot up your computer, you’ll get a lovely boost to your day when you see this wallpaper. They’re all eating in this scenario with Xingqiu being a sophisticated individual drinking tea. Aether is seen eating a lot of food with a big smile on his face. You can find this wallpaper on Wallpaper Cave.

Ninguang and Ganyu in Genshin Impact

To celebrate 10 million followers on the social media website Bilibili, MiHoYo shared this image of Ninguang and Ganyu hanging out in a shrine. Ganyu is giving a nice smile, looking toward the camera while Ninguang is in the background relaxing with her friend. You can see some leaves falling down as well. We found a high-res version of this picture from xUDe on Twitter.

Brother and sister together in Genshin Impact

Brother and sister Aether and Lumine are reunited once more in this official art piece. It features a beautiful white flower bed with some stunningly drawn clouds on either side. You can also see two stars shining above the protagonists’ heads. We found a 4K version on Alphacoders.

Genshin Impact’s Venti in the forest

This watercolor painting of Venti sitting in nature is absolutely stunning. He’s playing his harp among the birds, butterflies, and ferret-like creatures that inhabit the forest. This piece was released alongside a Genshin Impact EP called Genial Breeze of Hope in January 2021. The video on YouTube has a lovely animated version of the picture above. We found this on Alphacoders.

Friends hanging out in Genshin Impact

In this image, we can see the main character Lumine hanging out with her friends from Monstadt, Amber and Jean. The picture is beautiful as he depicts a wind moving through the trio as feathers whisk through the air. Amber is pumped about hanging out with her buddies as Lumine tries to compose herself after the breeze. Meanwhile, Jean is chill, looking as cool as ever. We found a large copy of the picture here on Pinterest.

Aether with some new friends in Genshin Impact

In this picture, Aether is giving a heroic pose next to another hero Albedo and the alchemist Sucrose. In the middle is the annoying, yet enthusiastic Paimon. On the top right, birds are flying left to right, as our heroes stand in front of Dragonspine. We found this picture from an official press kit here from Gamespress.

A glimpse of Liyue from Genshin Impact

The last official wallpaper we’ve found from MiHoYo is a glimpse of Liyue with three beloved characters: Yae Miko, Xiao, and Ganyu. There are some stunning fireworks going off as people are preparing to light lanterns and fly them through the sky. We found this image through a press kit on Gamespress.

Use your own photos from Genshin Impact

One of the best ways to get a great wallpaper for your PC is to take the screenshot yourself. You know what you’d like, so why not do some DIY? Go into Genshin Impact’s photo mode, find a great backdrop like the city of Mondstadt, and have one of your favorite characters (we picked Gorou) pose in front of the camera. As you can see in the picture above, you can even blur the background. This can get an awesome image for your wallpaper.