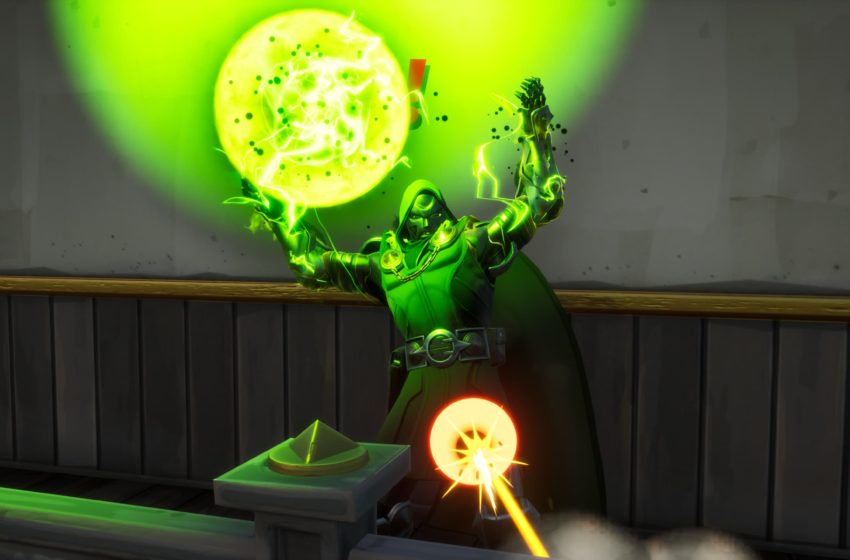 Fortnite Mythic. You gotta love them. The weapons hit hard, and the items tend to be pretty ridiculous. A new season means new Mythics, so in this guide we will let you know where to get every Mythic item in the game.

To get Doctor Doom’s Mystical Bomb you will need to make your way to the new Doom’s Domain POI that has replaced Pleasant Park. In the north of the town, you will find Doom House where the Doctor himself prowls the hauls. Smash in a wall and the kill Doom and he will drop the Mystical Bomb mythic. You can charge up a massive green orb of energy then unleash, smashing enemies and settings things on fire.

The Arcane Gauntlets are the second Mythic item that Doom will drop when you kill him. These will give you a boost jump, allow you to float through the air a little bit. You can also blast enemies with green beams of magic. Sounds fun, right?

The Silver Surfer’s Board can be gotten from the drones that float around near the Quinjet sites. You can easily find these at the start of a match by aiming for the blue smoke. Be careful, as the areas are patrolled by Stark Robots armed with power weapons. Take them all out, then shoot down the drones for a chance at getting the Silver Surfer’s Board. When you activate this item, it will boost you into the air, allowing you to redeploy your glider.

Groot’s Bramble Shield also has a chance of dropping from the drones near the Quinjets. It will block all incoming damage, and should look familiar to Guardians of the Galaxy fans. Best of all, the shield will even heal you thanks to Groot’s magical light. He really is the best Guardian, sorry Quill.

Now, this is everything we have found so far. We strongly suspect that more are in the game, or at the very least are on the way over the course of the season. We will add anything we find to this list.

If you want Iron Man’s Repulsor Gauntlets you will need to make your way to Stark Industries to the northeast of the Authority. Here, you will find Iron Man. If you take him out, he will drop two Mythics, one of which is the Repulsor Gauntlets.

These have a medium rate of fire, but hit pretty hard, and have a decent projectile speed.

The other Mythic that Iron Man will drop is the Unibeam. This will charge for a moment, then unleash a devastating blast of energy from you chest that can one-shot another player if you land it and they have no shields.

Another Mythic that can be obtained from the drones at a Quinjet patrol site, the Mjolnir Strike will call down a powerful blast of energy, doing plenty of damage to enemies caught in the area of effect.

You can find Wolverine’s Claws by taking them off Wolverine’s cold, dead body. This particularly angry Candadian can be found wandering around Weeping Woods, often near the hotel and camper park there. Wolverine’s Claws will give you access to powerful melee attacks, and dive roll, and automatic healing whenever they are equipped.

Storm’s Whirlwind Blast is another Mythic that you can get from the drones found at Quinjet patrol sites. This Mythic will cause a whirlwind to form around you that you can then “throw” at enemies. It will do damage on impact, and throw enemies away from you.