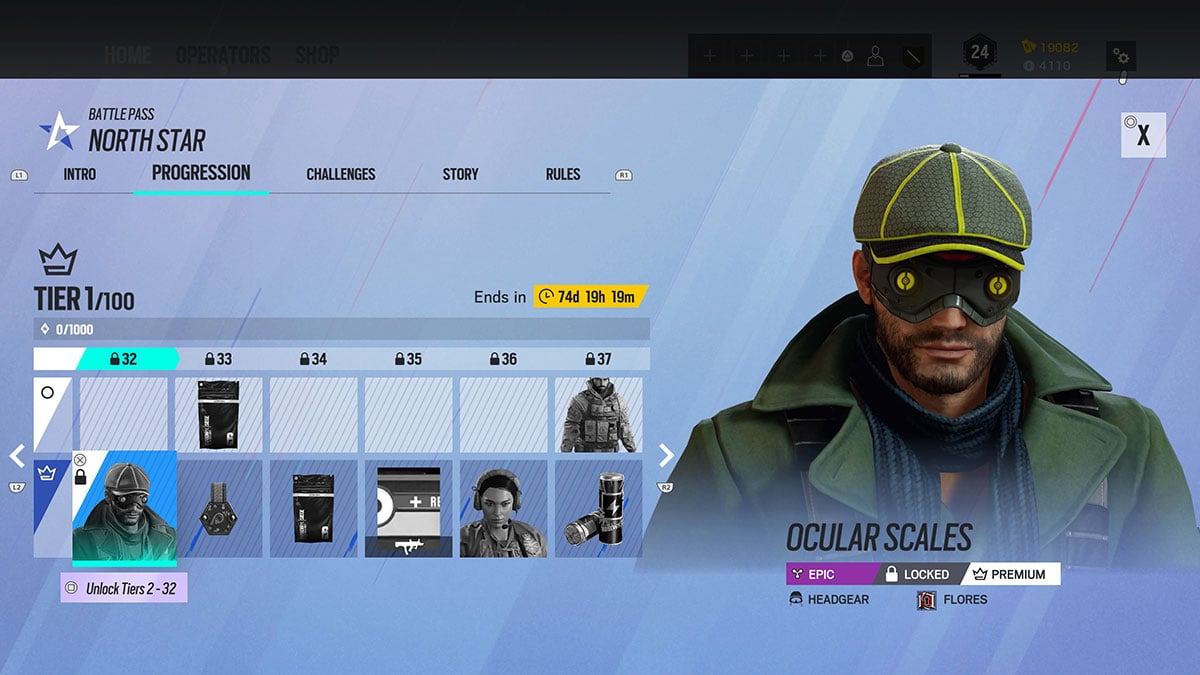 Rainbow Six Siege Operation North Star is now live. With 100 ranks to work through, the battle pass for this season offers many cosmetics and boosters to collect. But not all of them are worth the grind, let alone equipping to your Operators or weapons. This guide covers the best rewards in this season’s battle pass—the ones you’ll want to equip as soon as they drop.

Ocular Scales is a piece of headgear that’s available for most Operators. This set for Thermite is the first you’ll unlock in the battle pass, but you can unlock it for almost every Operator in future tiers. This item is just a good way to motivate yourself to power through the early tiers in the battle pass until you unlock something worthwhile.

This is another cosmetic available for a few Operators this season, but we think Jackal wears it best. The pattern goes well with the Ocular Scales above and makes for a neon tactical look that blends in absolutely nowhere. It’s so ridiculous that it’s past the point of being funny. Anyone ballsy enough to wear this must be dangerous.

A headgear set for Buck, this makes your Canadian hero look like he’s just walked out of a wildfire. Smoke has stained his face, and he’s sustained a few cuts from falling trees, but he’s made it out alive. It might not look like much, but this is a good look for Buck.

This is another version of the Reticulated Squadmate uniform, but we think it looks so good that it’s worth mentioning. Valkyrie’s sleeves really do make the most of this one.

This uniform makes IQ look like she’s wearing a thick Christmas jumper underneath all of her tactical gear. It’s a good look, though. That thick covering is the perfect backdrop to the lethal resources she’s got packed into all of her pockets.

Flores really is the one to take this cosmetic and make it his own. His beret has been switched out to match the headgear, and he’s honestly never looked better. Once again, whoever is confident enough to wear something that bright has to be a threat.

Our first weapon skin of note in this battle pass. Improvised Guard just makes this particular firearm feel more lethal. The handmade elements also give it a grounded touch, as if it might fall apart in your hands or kill the person next to your target.

Hands down our favorite trinket of this season. It’s nothing more than a mouse on a string, but it makes you look like you’re baiting out a giant cat. Seeing this dangle from your weapon in every match won’t make anyone cower with fear, but it might distract them enough to get a headshot.

This headgear is what happens when you design your camouflage on a rooster. It’s as if Kapkan has bundled as many leaves onto his head as he possibly can but forgot to disguise the shape, creating more of a hairdo. For the jokes alone, this headgear is worth the grind to tier 78.

This weapon skin for Nomad might be the most seasonally appropriate in the battle pass. The rescue tag along the side is reminiscent of Thunderbird’s calling and a reminder of who this season is about. It’s also got a nice level of irony to it when you think about all those Operators you’re definitely not rescuing.

The penultimate tier for this season offers an absolutely ridiculous reward. Nokk has never been one to show their face, but slapping an actual clump of bedraggled frozen moss, probably from a beach somewhere, is something they should reconsider. Still, at least enemies will be afraid of you.

The final tier of this season’s battle pass is by far the best. It’s a weapon skin that epitomizes the season. Bringing together all the colors associated with it and the iconic search and rescue symbol Thunderbird is known for. If you have the time and motivation, unlocking every single tier is well worth it this season.