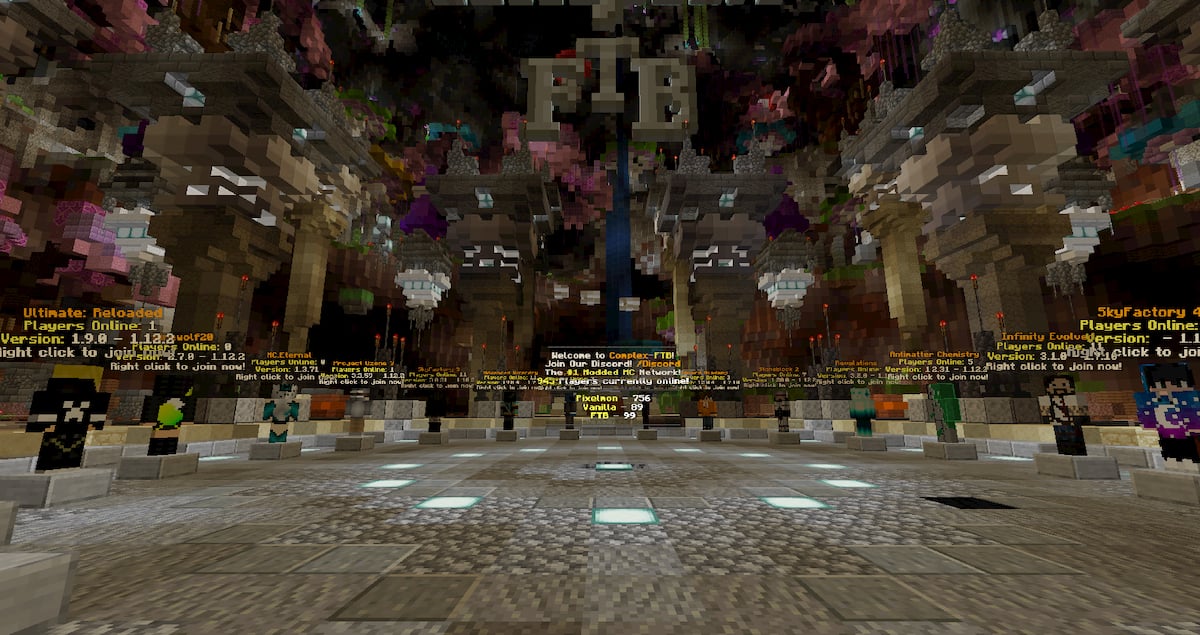 Feed the Beast, also known as FTB, is an expansive mod pack for Minecraft. The mods used in the pack focus on more technical gameplay in the game than the more fantastical or creative game modes created by other mods. FTB has numerous iterations with unique blocks and mechanics in each one. The pack can only be used on Forge and is one of the most popular packs currently available in the game. Here are the best FTB modded servers currently running for Minecraft.

The BacoNetwork features a lot of different gametypes players can take part in. Players can have fun on worlds with Sky Factory, FTB Revelation, and FTB Stoneblock 2. The network has several worlds for each gametype, so none of them get terribly overcrowded. The IP for the server is: play.baconetworks.com

The Complex Gaming Network has been steadily growing to become one of the most popular server networks available. It has something for everyone, including Pixelmon and FTB. The FTB portal is right behind you when you first join the server. There are multiple worlds for each of the different flavors of FTB available to choose from. The IP for the network is: play.mc-complex.com

Nytro is a smaller server network that focuses on FTB and Sky Factory gameplay. It has several worlds for all of the most popular survival and technical modpacks. This is a good server network for people who want challenging survival play or are looking to expand on playing with redstone. The IP for this server is: play.nytro.network:25565

The Golden Sands network is a pretty straightforward server to play on. The network uses FTB and custom crafting recipes that are unique to the server to create a new experience not found on other servers. It also features enhanced redstone engineering and a tight-knit community for a new player to join. The IP is: play.goldensandsmc.com

The Mineland Network features a few unique game modes for FTB players. There are four creative worlds, regular events, and excellent anti-cheat and anti-griefing software to go with the FTB modpack. If that sounds too tame for you, there is also an anarchy world with no rules and no anti-griefing rules to stop you from doing whatever you want. The server IP is: fly.play-ml.ru