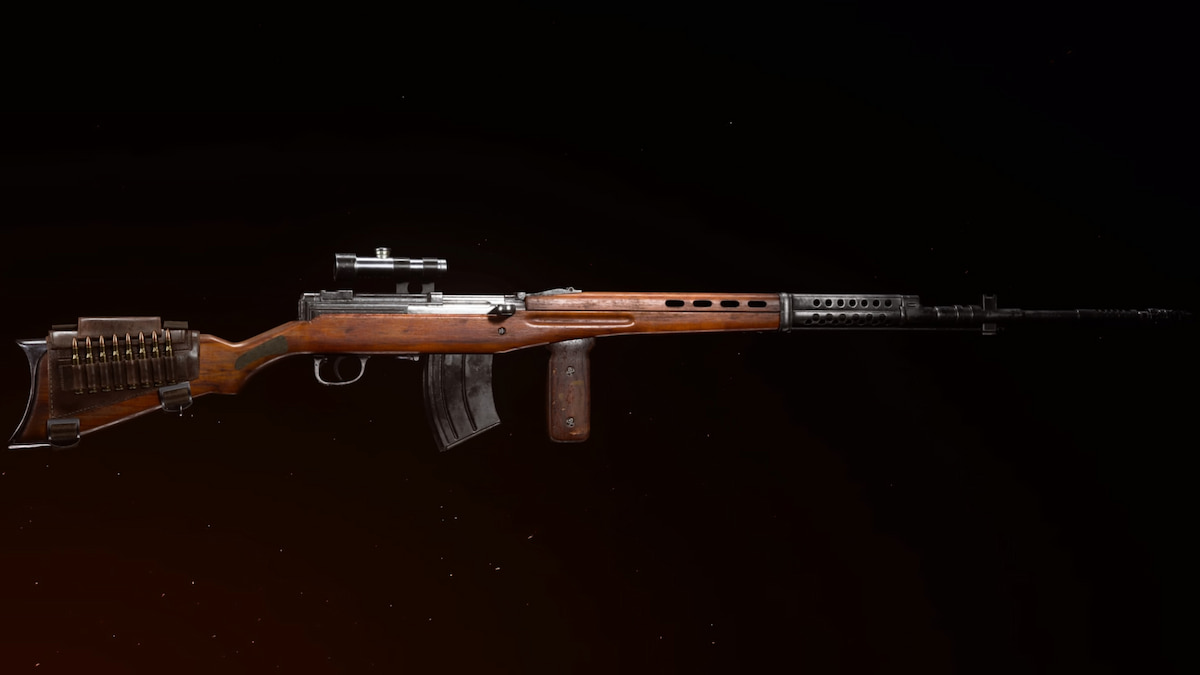 Call of Duty: Vanguard and Warzone Pacific players searching for a dominant marksman rifle should look no further than the SVT-40. As most know by now, base rifles of any kind are frustrating to level up, but this weapon is one of few that is worth the pay off. When fully leveled, the SVT-40 can be a one to two-hit machine with a fast aim-down-sights time and plenty of ammunition. Here’s are the loadouts that will help you witness it for yourself.

The STV-40’s best Vanguard class is fairly unique compared to the rest, as it succeeds at any range and is compatible with almost all play-styles. Thus, whether you want to run-and-gun or just stay back at a high point and wait for enemies, this setup will certainly work in your favor. Here’s are all the attachments needed to pull this off.

As shown below, the biggest contributor to this loadout’s power is the Kovalevskaya 800mm barrel. This adds over 15 percent more damage to the SVT-40 and lessens its recoil by almost 50 percent. Better yet, any shot made to the chest or above will be a one-hit kill. With it being one of the first attachments you’ll unlock, equip it as soon as you can to level it up faster.

Another major attachment you may have to wait awhile to get is the 6.5 Sakura 15 Round. This speeds the fire rate by 50 percent and also plays a role in calming the gun’s recoil. Lastly, the remaining pieces added, such as the Fabric Grip and Crown Padded, should aid in giving you a respectable ADS time for close-range combat.

In terms of the optic, truthfully, you’re better off going with whatever works solely for you. We recommend the PU Scope because of its ability to switch between 3.0x and 6.0 zoom levels — perfect for most situations. For perks, Scavenger is capable of lending you additional ammo from all fallen soldiers on the map, while Forward Intel will label nearby enemies directly in front of you. However, as Ghost simply wipes your location away from opponents’ radars, more aggressive players may choose to have Ninja instead — ultimately resulting in silent footsteps.

The SVT-40 is one of the most damaging long-range weapons in the battle royale; so, maximizing this factor can make any rookie or veteran player a top-notch sharpshooter. Keep in mind, this class is entirely different from our recommended Vanguard loadout. Thus, you don’t want to rely on it for close to medium-range combat. Here’s how to go about making the best Warzone Pacific class for the SVT-40.

As we’ve mentioned with the Vanguard loadout, the most influential attachment for the SVT-40 is still the Kovalevskaya 800mm B03 — giving the gun a larger one-hit kill area. This attachment, along with the m1941 Hand Stop and Empress Crown, will also make its accuracy and stability as close to perfect as you can get.

Parts like the MX Silencer and the 15 Round Mag will drastically slow your aim-down-sights time, but as long as you’re not firing at close-range, this shouldn’t be an issue. In turn, these two attachments will keep your location under wraps and provide you with the biggest magazine for the weapon.

In our opinion, most marksman rifles and snipers used in Warzone Pacific should always have the Cold-Blooded, Ghost, and Combat Scout perks applied to their class. Cold-Blooded and Ghost combine to keep you undetected by UAVs, thermal optics, and Heartbeat Sensors, while Combat Scout automatically highlights any enemies you have damaged to the rest of your squad.