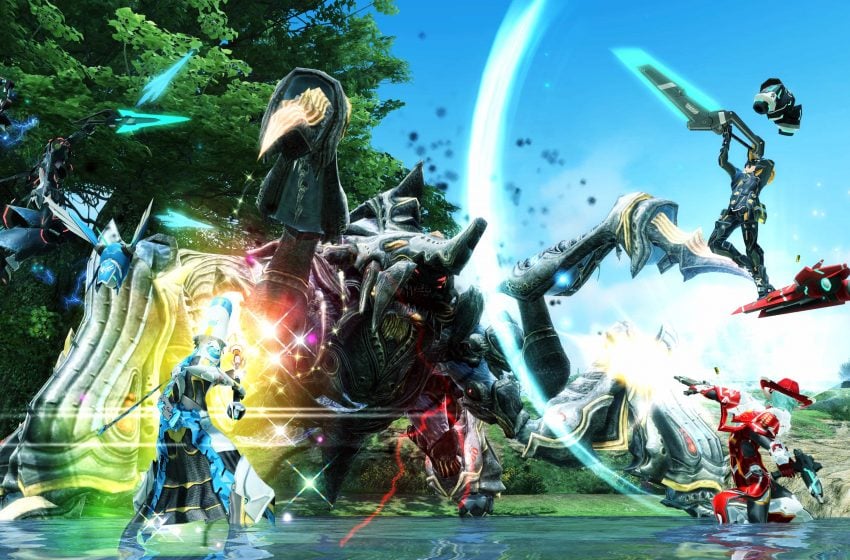 One of the many things we love about the Phantasy Star series is the combat aspect, specifically the weapons. The games, a little like the Monster Hunter series, feature a large variety of weapon types, each with very different play styles. Some are very straight forward with simple, but devastating combos, others are very technical and require a fair amount of thought to use. Which weapon type is the best is a hotly debated topic throughout the fan base. Ultimately the best weapon type depends on the skill of the player. This list, to keep neutral, will show the best weapon of each type in Phantasy Star Online 2 rather than the best overall. Almost all of these weapons can be received from Zieg. Unfortunately, some of the best weapons in the game are only available through heavy grinding.

The best weapon of each type in Phantasy Star Online 2

If we were talking in terms of just base power, the best sword would be the Gen Stil, which has a higher base strike attack stat, which is further boosted by the Power VI ability that can be added to the sword. The reason the Liberate Sword is a better choice is because of the Liberated Fang special ability that can be added to the weapon. Liberated fang increases power, decreases PP consumption, and Increases the critical hit rate. At level one, this ability gives a 10% buff across the board, but when fully leveled, it grants a 20% critical boost, 15% PP consumption decrease, and a 16% power boost. Crits deal the maximum damage possible for an attack. Normally, weapons only have a 5% chance to deal a critical hit, a boosted 20% chance plus the power boost and PP consumption buff will allow you to make short work of tougher enemies that even the Gen Stil might have trouble with. You can get this sword from Zieg by upgrading a +35 Novel Sword with 500 Plamnia, 500 Excube, 200 HuExcube, 50 Ultimate Booster, and 10 Diard.

Like the Liberate Sword, this lance is the second strongest in terms of base attack power. However, it overshadows the Cruva Stil thanks to the Liberated Fang and Unrivaled Parry abilities. Liberated Fang increases power and critical chance while decreasing PP consumption, which is very useful for handling tougher enemies. Unrivaled Parry pairs very well with the playstyle for the lance. After successfully performing a Just Guard, power increases by 2%, and you won’t consume any Gear for 15 seconds afterward. This weapon is gained by upgrading a +35 Novel Lance with 500 Palmnia, 500 Excube, 200 HuExcube, 50 Ultimate Booster, and 10 Diard.

This weapon has the highest base stats of any partizan and has great abilities to compliment partizan playstyles. The weapon has a base S-ATK of 1820 and a max S-ATK of 2457 when fully leveled, which is the highest available in the game. The Execour Glare ability gives it an ATK boost of +20 and a DEF boost of +50. The Despot Awakening ability regenerates PP every second and increases power by 11% for 20 seconds. It is triggered by using a Normal Attack while being near enemies for 40 seconds. The power boost can send this weapon’s maximum damage potential through the roof, while the PP regeneration will keep you flush with enough points to use your more costly Photon Arts. This weapon is only available as a drop from Grav Execour, or through Divide Medal Exchange.

The fast-paced nature of this weapon type can benefit from the increased Crit chance granted by the Liberated Fang ability. The ability increases critical hit rate by a maximum of 20% along with a power increase of 16% and a lowered PP consumption. This weapon can be upgraded from Novel Dagger +35 at Zieg with 500 Plamnia, 500 Excume, 200 FiExcube, 50 Ultimate Booster, and 10 Diard.

In terms of damage, this weapon isn’t the strongest double saber in the game, though it does rank pretty high. What makes this weapon so valuable, and one of the best in the game, is the unique Rose Dew ability. Rose Dew increases power by 9% at its base level up to 13% when fully leveled. The ability also instantly consumes Mates to heal you. This is even better when combined with the special ability Medicinal Wisdom which restores PP when a Mate is consumed. This setup is meant to slightly boost your damage output while keeping you healed and flush with Photon Points. This is great for players that make heavy use of items and Photon Arts. The weapon can only be received through the SP Collection file, or the Chocolate Way and Boisterous White Day events.

The Forza Stil knuckles have the highest base attack in the game for this weapon type and can be equipped with the Power VI ability for an additional +45 S-ATK. This weapon can also have the Steadfast Might ability. Steadfast Might Lowers your power bonus when you are taking damage, but when your power bonus reaches 14%, it gives you a 40% damage resistance boost, increases PP recovery by 60%, regenerates 20 PP every 10 seconds, and allows you to become massive. This weapon is available through the Puras Series of upgrades from Zieg.

This weapon is dropped by the Ebolion Dragon at level 86 and up. It can feature the Battle Hardened ability, which increases power by up to 11%, gives an additional 10% damage resistance, and can make you massive. The problem with this ability is that when you take damage, you lose 20PP. It can also feature the Sturdy Intent ability that gives an additional 4% damage boost if your Guard Ring’s element matches your enemy’s weaknesses. This weapon is all about capitalizing on maneuverability and enemy weaknesses.

Flotea Blade is an interesting weapon that is available through the Cosmic Calamity. It has a base strike attack of 1784 with a max of 2408 at +35. It can have the Stamina VI special ability, which gives an extra 80 HP, which is always useful. What makes this blade a lot of fun to use is the Venusian Beam ability. It increases power up 12% and recovers an additional 5 PP when Just Guard PP Aile is activated. This ability complements the fast-paced playstyle of the Dual Blades and helps balance it out with the lower overall defensive capabilities.

This gunslash is great in a pinch. The Lightstream Resurrection ability can increase power up to 10% and fully restores your PP when you cast a Photon Art or Tech with below 10% PP along with an additional 3% power boost. The ability has a long recharge of 120 seconds, but it is a huge help if you get stuck in a bind. It can also have the Shoot Boost ability that increases power by 1% for every 60 R-ATK you add to the weapon, and an extra 2% if you affix 200 or more R-ATK. This weapon is available through the Celestial Series Upgrade at Zieg.

This rifle has some handy abilities that put it well above weapons with a higher base power. The weapon can have the Cabine Vortex and Mithra Glare abilities. Carbine Vortex will auto-fire on targets every seven seconds when it is unsheathed. This effect also hits twice. Mithra Glare gives a ton of stat boosts, including +30 S-ATK, +30 R-ATK, +20 R-DEF, +20 T-DEF, +20 HP, and two extra PP. The huge stat boosts and auto-fire will help you make short work of just about any opponent you meet. This is only compounded by the high base attack Vortex Byde has when it is fully leveled.

This weapon is available through Ultra Exploration: Harkotan. The launcher has a high base R-ATK of 1960 and a max of 2646. The high attack is boosted further by the Shoot VI ability, which increases R-ATK by 45. It has a potential ability called Impulsive Assault that increases power up to 10% but also increases damage taken by up to 70% at the lowest level and 50% at the highest. If you are incapacitated, the ability is disabled for the remainder of the quest. This is a good weapon for dealing a lot of damage but requires a player that is good at mitigating or avoiding damage altogether.

This weapon is earned through Divide Medal Exchange. Aestria has one of the highest base R-ATK available in the game and helps capitalize on defense and Photon Arts. The Brilliant Ruin ability allows the player to recover PP when an enemy is defeated within a certain range. Ionizing Barrier Increases power up to 12% and grants a 60% damage reduction for 7 seconds after evading an attack.

This bow has a maximum R-ATK of 2851, making it one of the strongest in the game. This bow is great for getting in a few extra hits in combat. With the Auxiliary Arrow ability, it launches a chase arrow when a photon art hits an enemy. If you successfully dodge an attack with a step, the chase arrow gets a power boost for 15 seconds. It also has the Liberated Fang ability that increases power, critical hit rate, and decreases PP consumption. This bow is great for capitalizing on critical hits and good movement.

This rod is only found through the Divide Quest and the Divide Medal Exchange. This rod is the strongest in the game with a base S-ATK of 1570, a base T-ATK of 2332, a max S-ATK of 2119, and a max T-ATK o 3148. Aside from the base damage, this rod also has the Despot Awakening and Execour Glare abilities. Execour Glare gives a +20 ATK boost and a +50 DEF boost. Despot Awakening is triggered by using a normal attack after being near an enemy for 40 seconds. The ability regenerates PP every second and increases power by 11% for 20 seconds.

This talis focuses on balancing support and aggressive playstyles. The Liberated Fang ability increases critical chance up to 20% and increases power up to 16% while also decreasing PP consumption up to 15%. When you add in the high base T-ATK of this talis, the increased crit chance can help players shred through enemies pretty quickly. The talis can also have the Speedy Support ability, which makes it very good for playing a support role if needed. The ability lowers the charge time of support techs and reduces the power of zondeel.

This wand can be found in the Omega Masquerade quest and via the SP Special Collection Sheet. This wand has good ATK stats with a maximum S-ATK of 2458 and a max T-ATK of 2442 when fully leveled. It can have the Resenting Prayer and Persona Reverie abilities. Persona Reverie causes a -20 DEF debuff but gives increases overall ATK by 40. Resenting Prayer reduces your PP to zero when you use a Photon Art or Tech while PP is maxed out. However, it also reduces PP consumption and recovers PP at regular intervals until it is maxed out. This is a weapon for purely attacking focused players.

This set of Jet Boots is really interesting. It is only available through Mining Base Defense: VR quests. It has a few different abilities, Urgent Maneuver 1 and 2 and Radiating Grace. Radiating Grace increases PP regen by 17%, which is very useful for people that make heavy use of Photon Arts. Urgent Maneuver 1 further increases PP regeneration by up to 200% while the weapon is sheathed. However, while the weapon is unsheathed, it stops natural PP regen but increases active regen by up to 60%. It also grants up to a 13% power boost. Urgent Maneuver 2 has an almost inverse effect. Natural PP regen is decreased by 60% while sheathed. When unsheathed, it increases both active and natural PP recovery by up to 20% with a power boost up to 8%. This kind of flexibility makes the weapon attractive to more technical players.

This takt is available through 6th Angel and The Piper of Disharmony quests. The takt is pretty straight forward; it has a base ATK of 189 that can be leveled to 255 at +10. What makes this particular takt very valuable is the special ability Crimson Evening. The ability grants 2 PP every second with a power increase of up to 6%. That’s it, nothing more to it. While the weapon and the ability are both very simple, the small buffs perfectly complement the playstyle for this weapon type. Even though the buffs aren’t huge, they will go a long way during protracted battles.