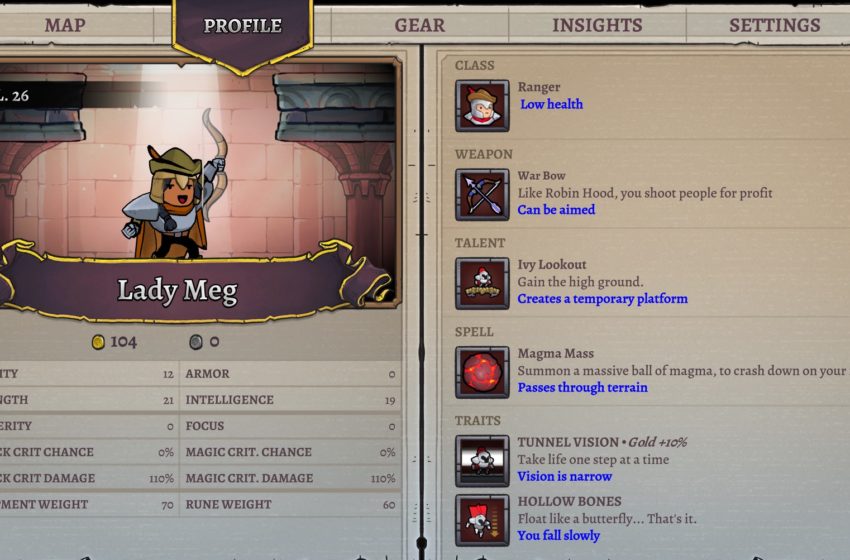 When you die, you have three new characters to pick from to try a brand new run. These characters are random combinations of various modifiers in the game that make up a character’s genetic traits and a different character class. There are four classes your character could be, and they each have a different weapon, class talent, and they come with a different playstyle. Here’s the break down of how they work.

The knight is a returning class from the first game. The class has a great sword that you can swing while moving, and its talent allows you to block incoming attacks from enemies. It doesn’t block all of the damage, but it gives you a good buffer to keep your health up when fighting a massive horde. It’s likely the most approachable and best classes to play in Rogue Legacy 2.

It has a decent amount of health compared to the other classes and remains the most flexible that you can play. It has some adequate magical capabilities, too.

Following the knight is the barbarian. When playing this class, you carry a massive ax that you have to stand in place to swing. Standing makes it pretty easy for you to take a hit from a rogue magic attack you didn’t quite anticipate before you tried taking out that big enemy. The large ax does a lot more damage, though, and barbarians have the most health of the game, so you can be a bit more forgiving with taking a hit. When attacking from the air, barbarians do a massive spin attack with their ax. Its class ability is called winter’s shout that destroys all projectiles and freezes enemies for a short duration. Your character has a lower intelligence skill as a barbarian, making their spells subpar.

For those who enjoy hitting their enemies with massive ax swings, you can have a lot of fun with the barbarian, but it might be tough to stand still when attacking.

Next up is the mage, the smartest of all the classes, and capable of dishing loads of damage, but they have extremely low health. You can fire the wand blast ability while moving around, and it’s a ranged attack, keeping you away from the fighting as much as possible. A mage’s attack range is pretty low, so they have to be careful and time their attacks to dodge away from an enemy’s swing. Their class skill allows them to have two different spells equipped, which goes well with their increased mana pool.

It’s a lot of fun for players who enjoy to remain ranged and do magical spells from a distance, even if you’re squishy.

The final class is the archer, and it’s a ranged alternative from the knight. It’s new to the game and gives players the chance to use a bow and arrow. They also have extremely low health, sitting alongside the mage, and their primary is a ranged choice. The downside to them is how long it can take to line up a shot. Rogue Legacy 2 is a quicker game than the previous one, and ranger feels a bit out of place because of how badly you can take to line up the shots. Aiming the bow takes a little bit; the attack animation is slower, and when you fire while in the air, your character is pushed backward.

You may not want to try ranger unless you have a bit more experience. Even then, you need some gear to make this class feel powerful when attempting to ascend the castle.