Many gaming fans lauded the original Crash Team Racing for several reasons, including its terrific cast, high-speed action, and its quality track design. But one thing that the game is known for, something which it does better than many other arcade racing games out there, Mario Kart included, is its great shortcuts that you can use.

On almost every track, you take the course and find ways take advantages of these shortcuts to bring your times down and leave Cortex and the rest of the crew in your dust. With Nitro Fueled, it’s no different, and as such, pulling off those shortcuts will give you a boost in the race.

With that said, here’s our guide to pulling off these shortcuts, in order as shown in the game’s course menu, in the CTR maps in the new game:

After the first corner of the track, ensure you have powerslide up to clear the ramp but keep to the right of the water. On the left, you should see a ledge. With correct timing of a powerslide boost and hitting the lip in the sand with a jump, you should be able to clear the ridge and over the hill, allowing you to avoid going around the ledge and under the wooden bridge. 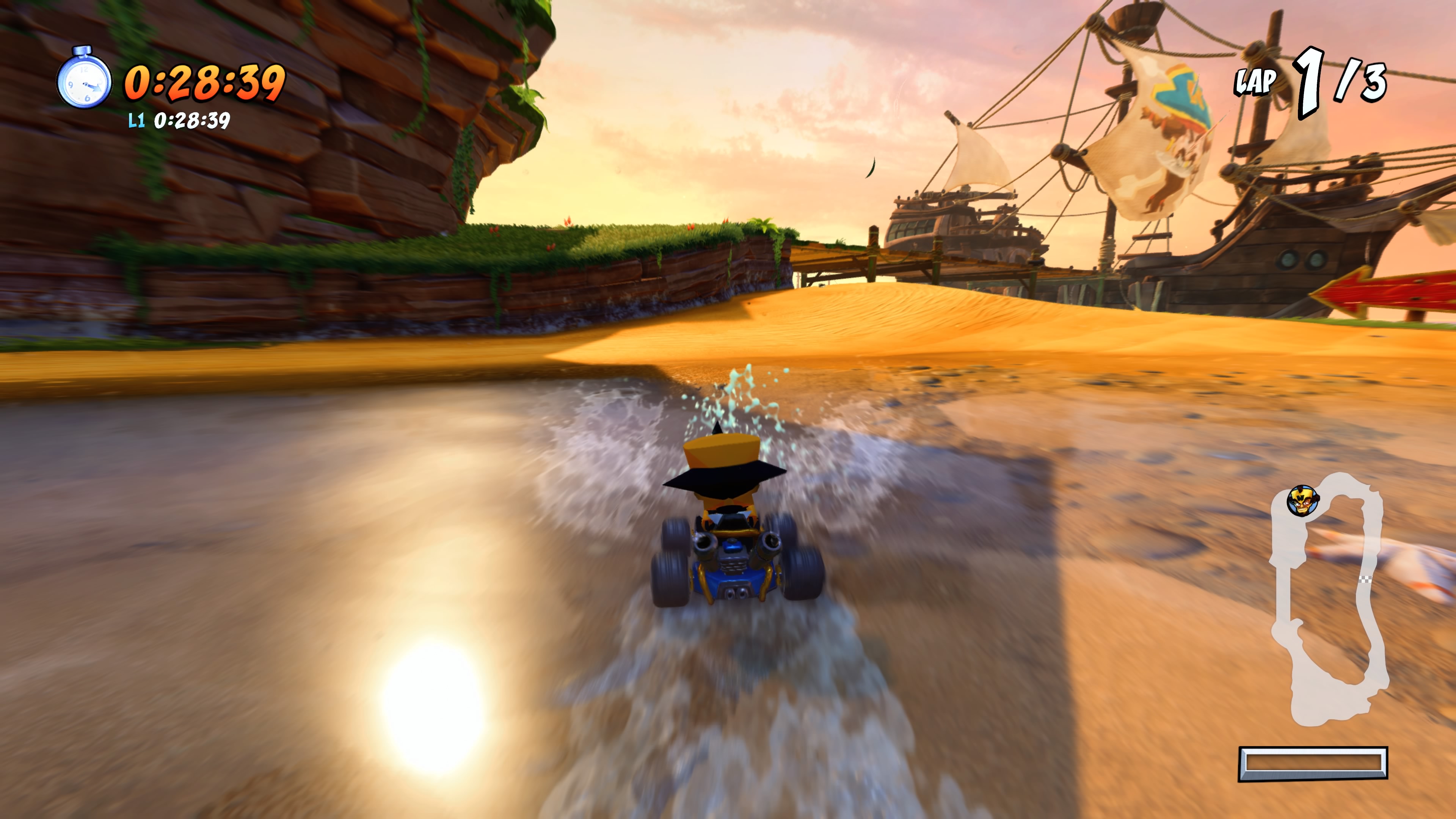 After following the first twist, take a right into the sewer tunnel and jump across the gap. As you exit, hop across to the left path on the raised edge of the halfpipe. Follow this around a turn and before the next right corner, jump down into the halfpipe where you see a ledge above leading to a tunnel, and boost/hop up the edge of the halfpipe. If done correctly, your jump should take you high enough to get onto the ledge and into the hidden pathway. 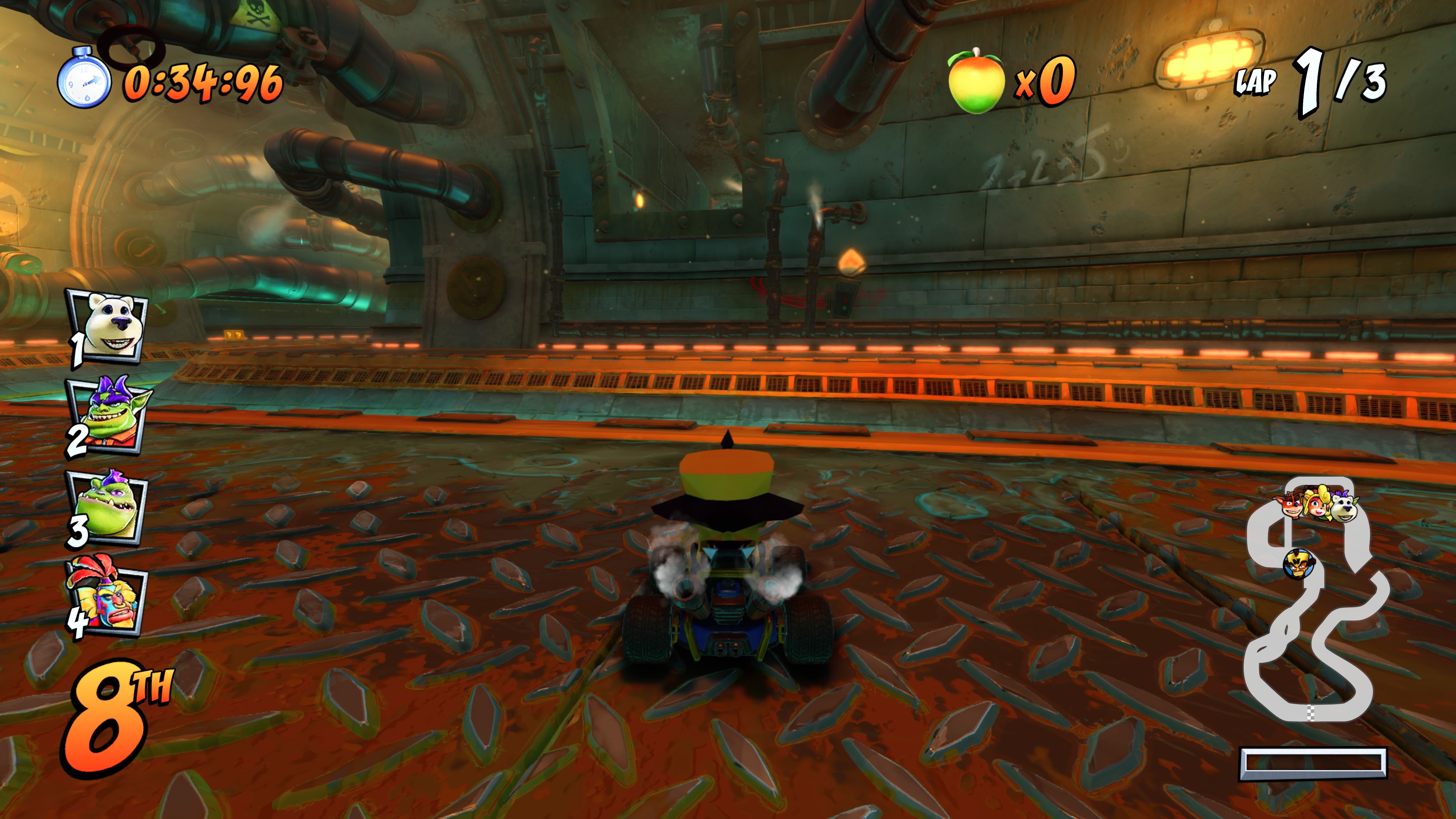 This shortcut will require a weapon that you can throw forward, like a Bowling Bomb, or invincibility with Aku-Aku. From the start, race until you come to a tunnel that contains two flame gargoyles. As you approach the end of this tunnel, you should see a gold panel that you can hit with the weapon. Drive towards it and hit it with the weapon as you get close. It only opens very briefly, so be sure to time it right. 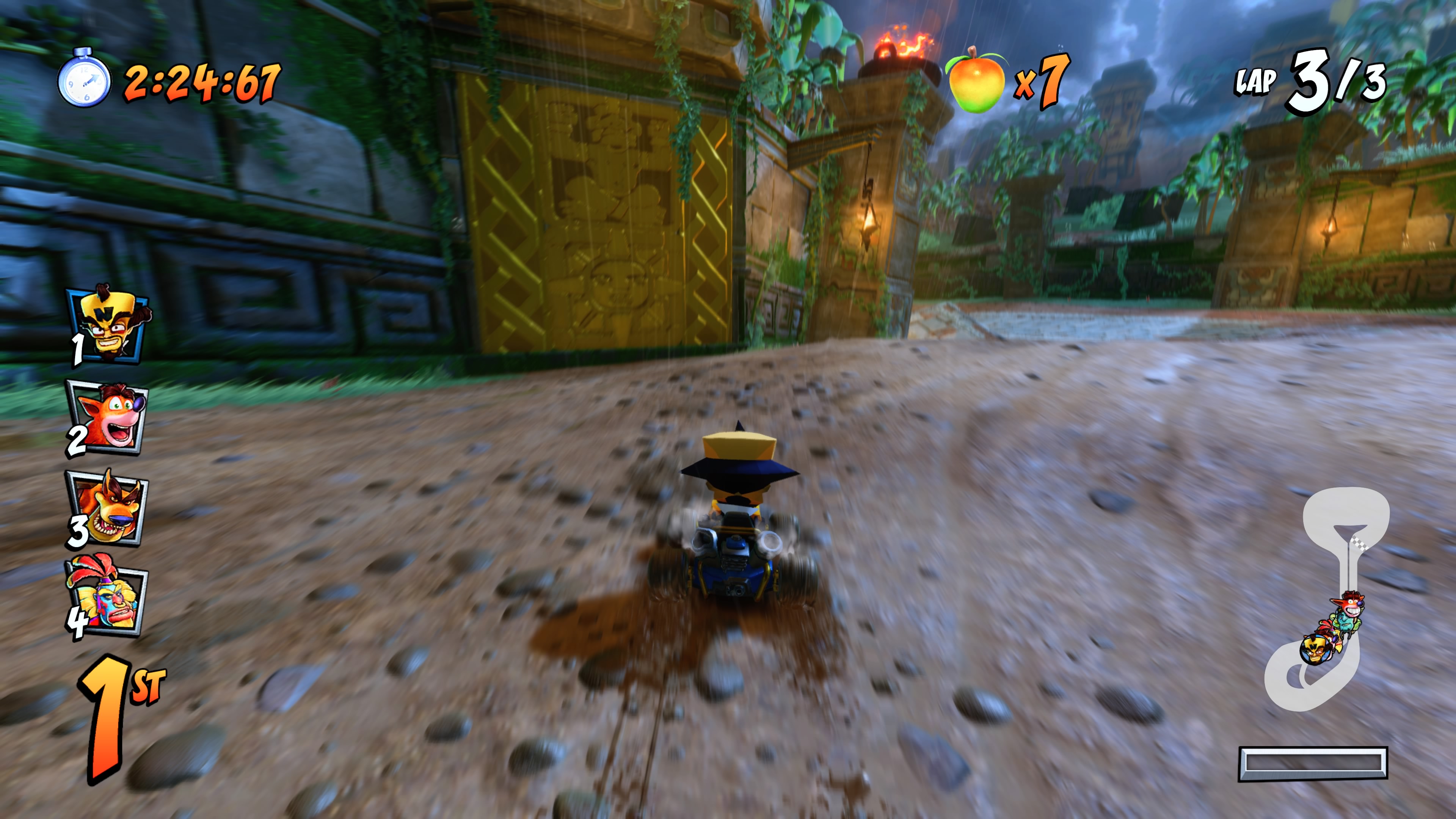 There are two on this track. The first is after the tower and then around the bend of piranha plants. At the exit of the section, before the U-turn, there’s a hole in the wall big enough to hop through with enough full speed. Missing this though causes you to fall, so beware.

The second is just after the first. Before the ledges that go under the bridge, hop on the left-hand side and take the path going over the bridge. This one is minor but still considered a shortcut. 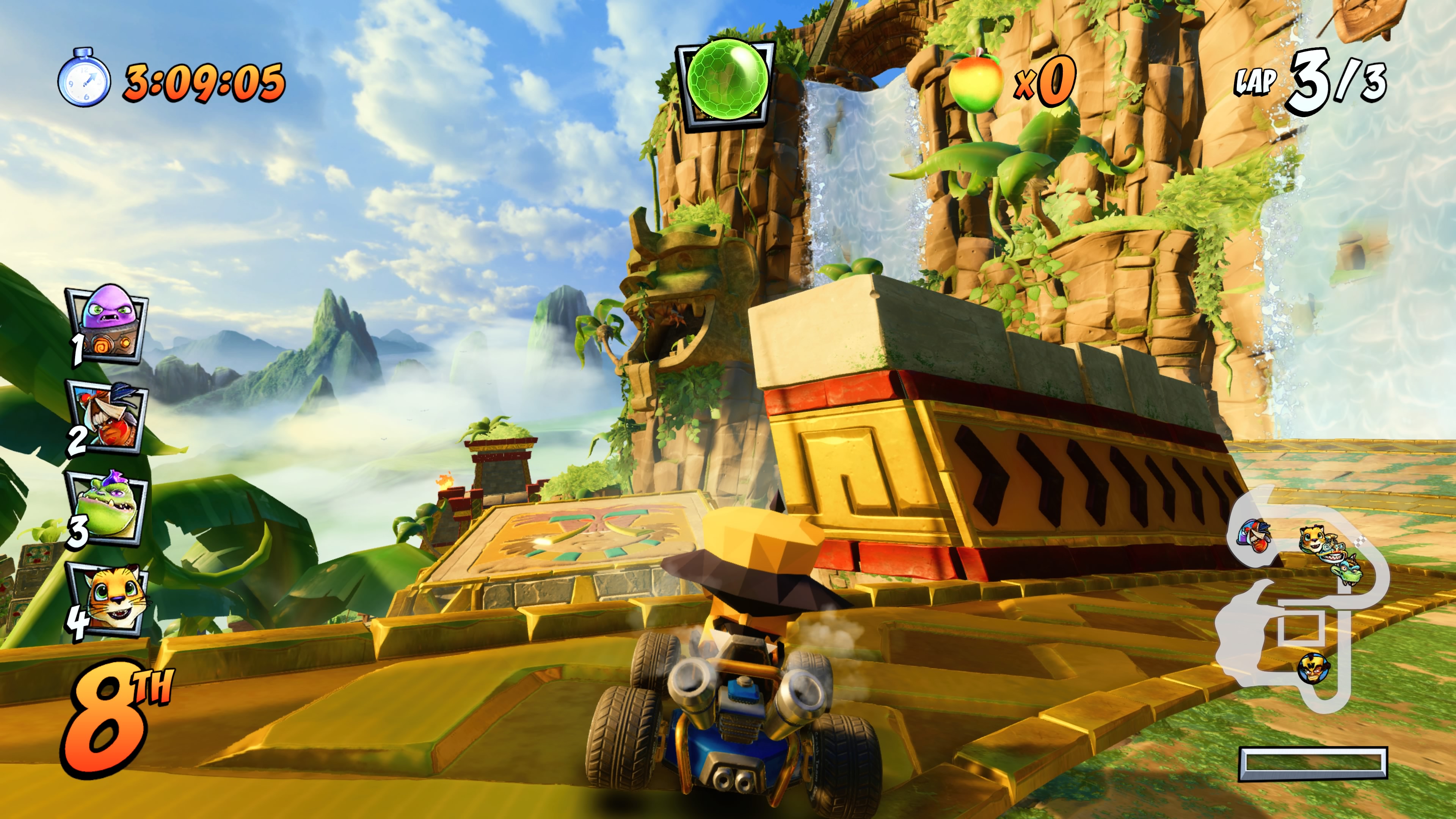 Race around the track until you make it to the cave with the two seals in it that are sliding around. Dodge them both and with turbo, jump off the ramp at the end and with enough speed, you can jump the wall, avoiding a U-turn and allowing you to pick up a bonus crate. 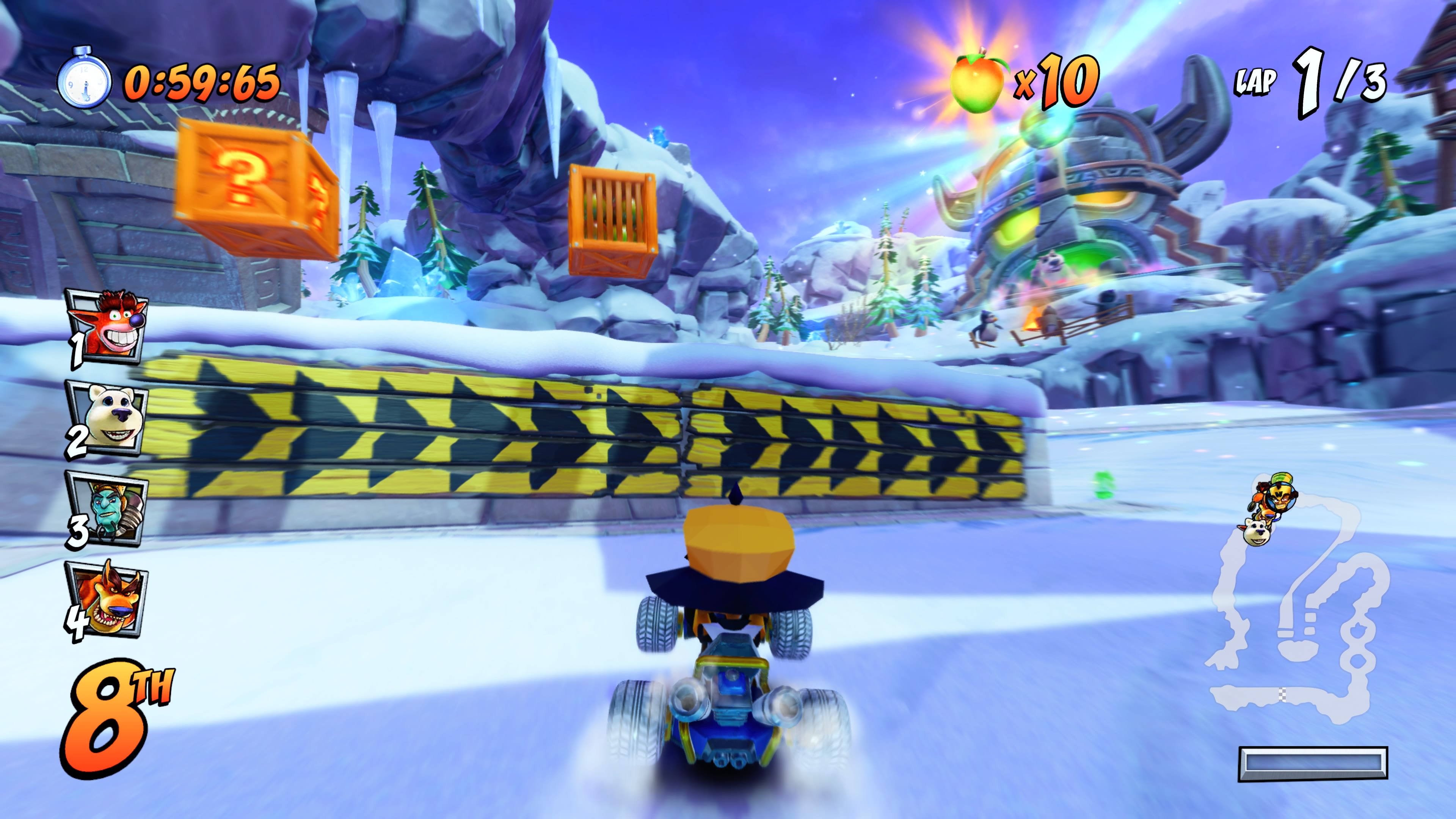 Just before the wooden platforms that spiral up is a mine cart track. You can take a sharp right turn and go up the track before hopping off at the top to avoid the spiral section. Beware of this one though as the minecart can come down and crush you along its way, while the track turns to sand, making it more difficult to maintain speed. Only advanced drivers should try this, or if you have an Aku-Aku available to use. 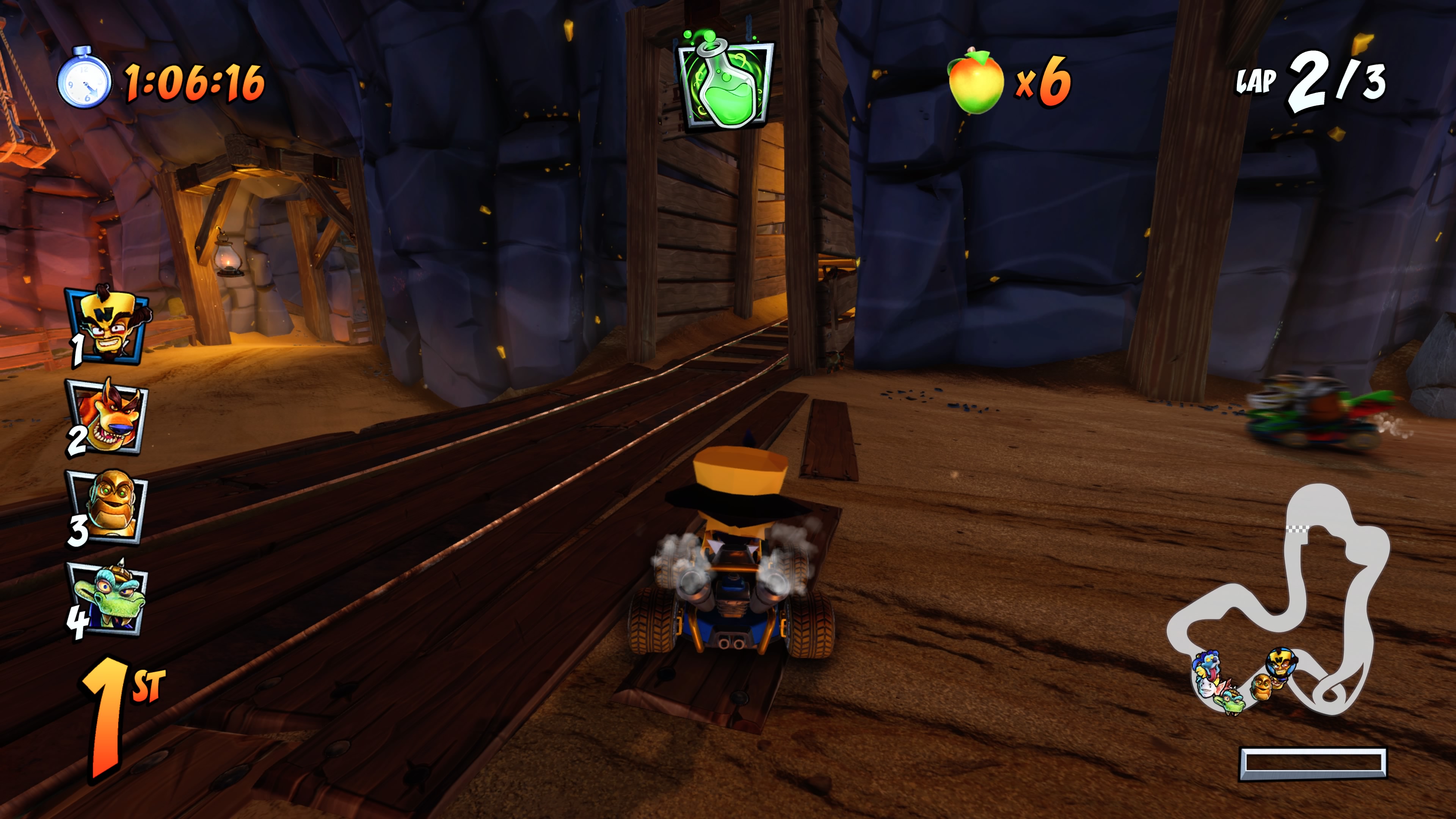 Three shortcuts await you here. The first is just after the rolling boulder. After the three jumps, there is a gap in the map on the left side of the lake between the rock and a house. If you can maintain enough speed with the right angle going through the ice lake, you can make this, cutting out the bridge section.

For the other two, after the lake shortcut, keep power sliding towards the left side of the track as you will then see two low fences that with the right angle and speed, you can jump over. They will only be accessible once so you’ll need to use the other on the next lap. If you’re finding this one tough, an Aku-Aku will make it much more comfortable. 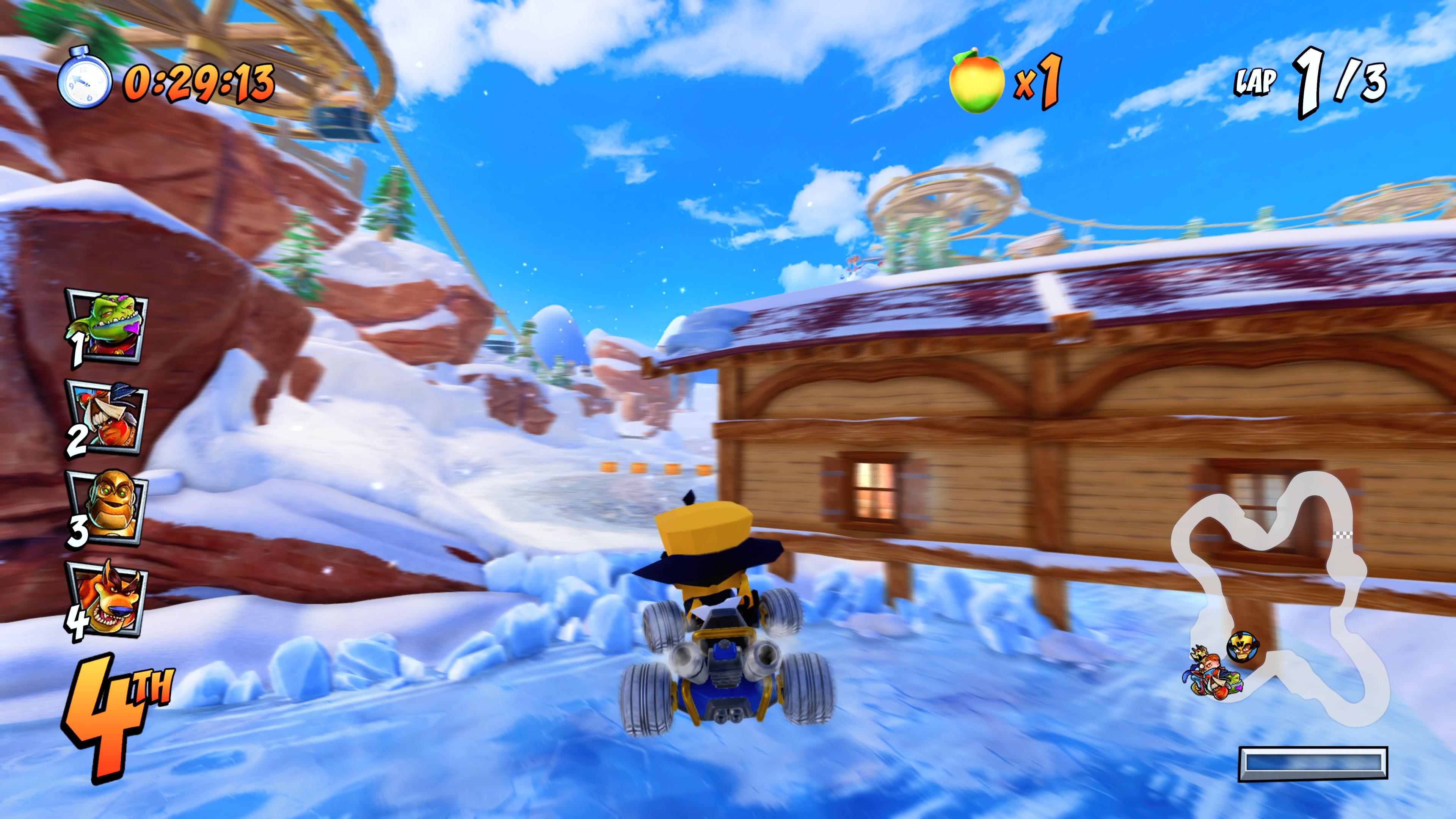 Continue racing on the course until you reach a long spiral section. As you come to the end of the track, come off it to the right-hand side. Doing so should land you on a small ledge which will cut off an additional corner and help maintain your speed. 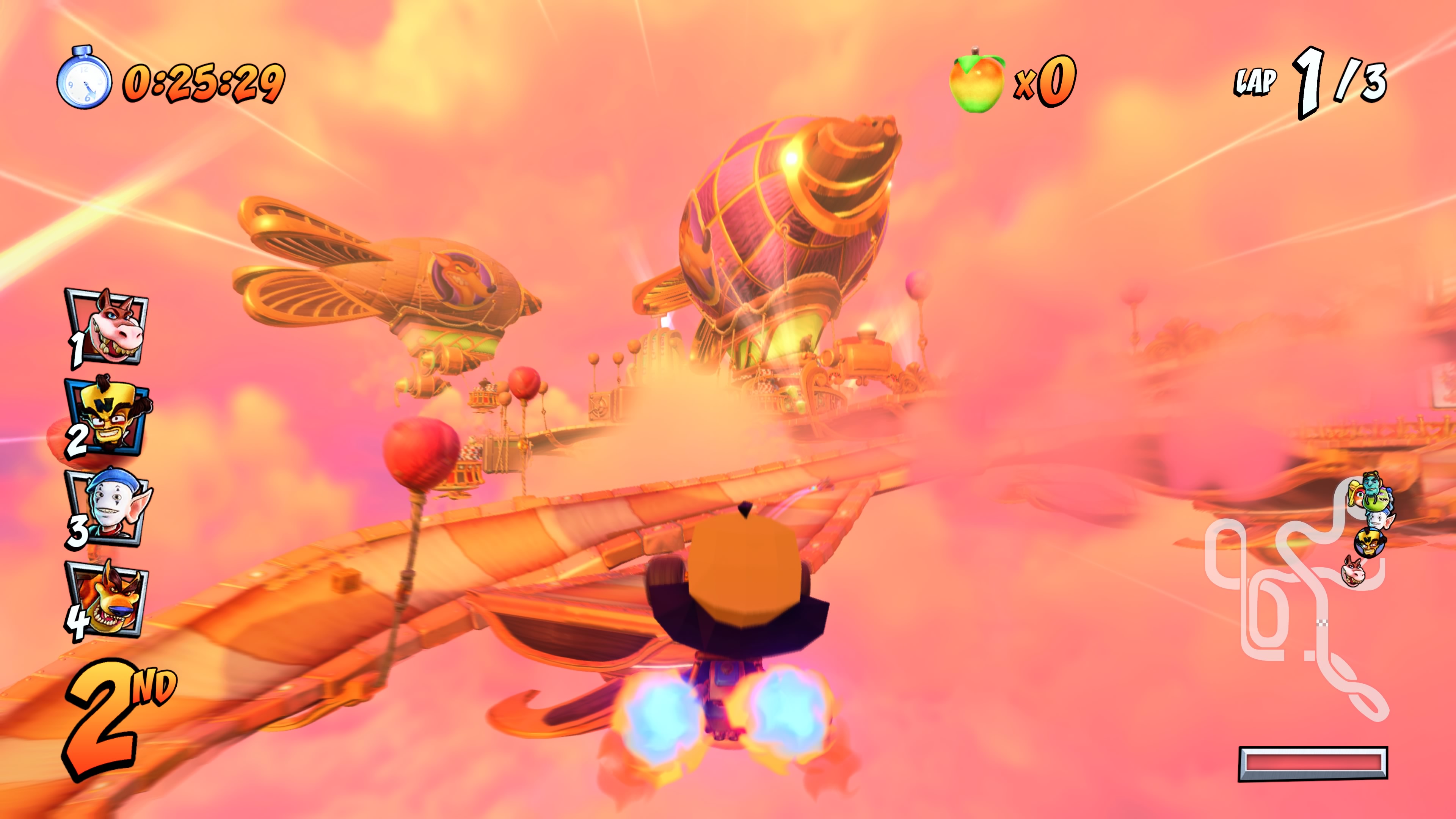 This one is near the end of the course, so drive until you see an outside section that leads into a small staircase. As you head down the stairs, just before you head back into the castle, hop off the ramp that’s on the left-hand side of the track. With enough speed as you approach the ramp, there is a small shortcut that you can take. 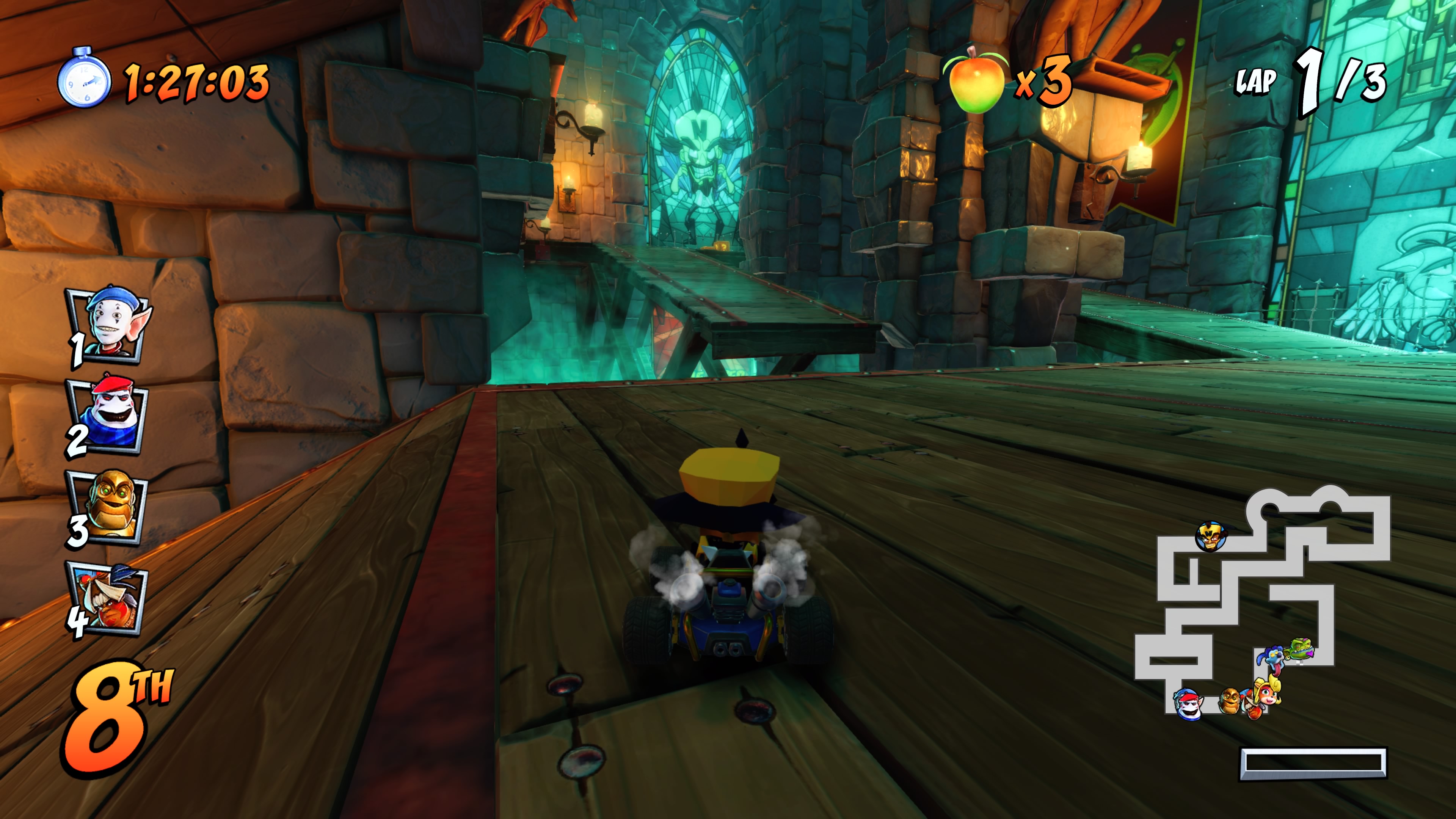 At the start of the course, just as you reach the end of the wooden bridge, looking to the left side, you should see a dip that you can race over. Jumping off the end of it can land you on a small grass ledge above it, which will cut out a large corner of the track. 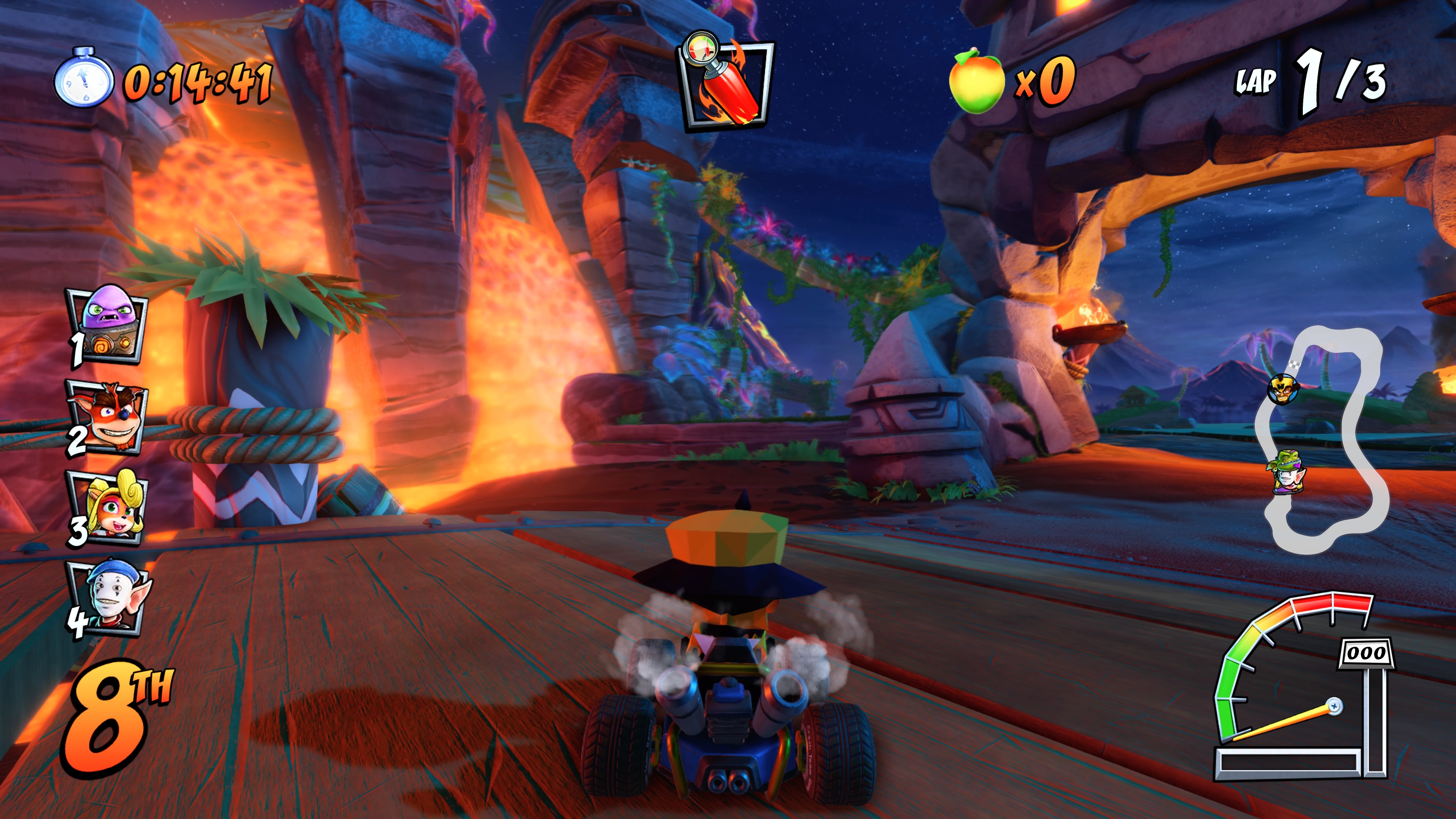 At the start of the track, keep to the right-hand side, and as you go down the first ledge, you can hop onto a ledge that hugs the wall as it goes around the U-Turn. Powerslide around this and then keep going as you will approach a turbo pad as the floor turns wooden. After the first bend, keep left until after the weapon crates where there’s an alternative path you can land on when you jump high enough to the left. You can use powerslide around here to cut off a considerable amount of the track. 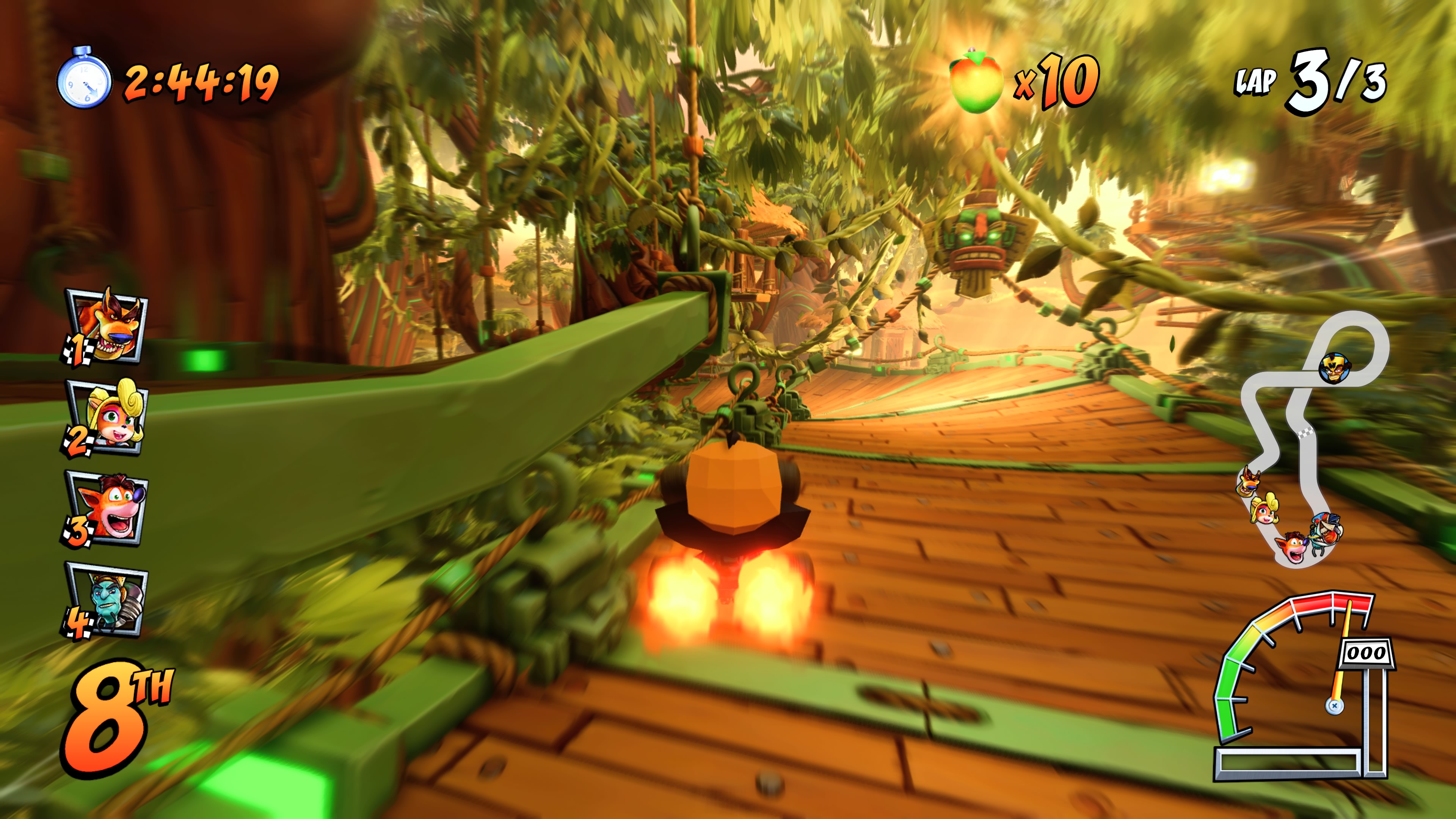 Race until you pass the giant gears that can take you out, and as you pass the second one, you can see there is a group of gears on the right side that you can jump onto to proceed. These will lead upwards as a shortcut, and just after completing it, a ramp on the right-hand side can lead you to a hanging path above the main course which will cut further time off the main track. 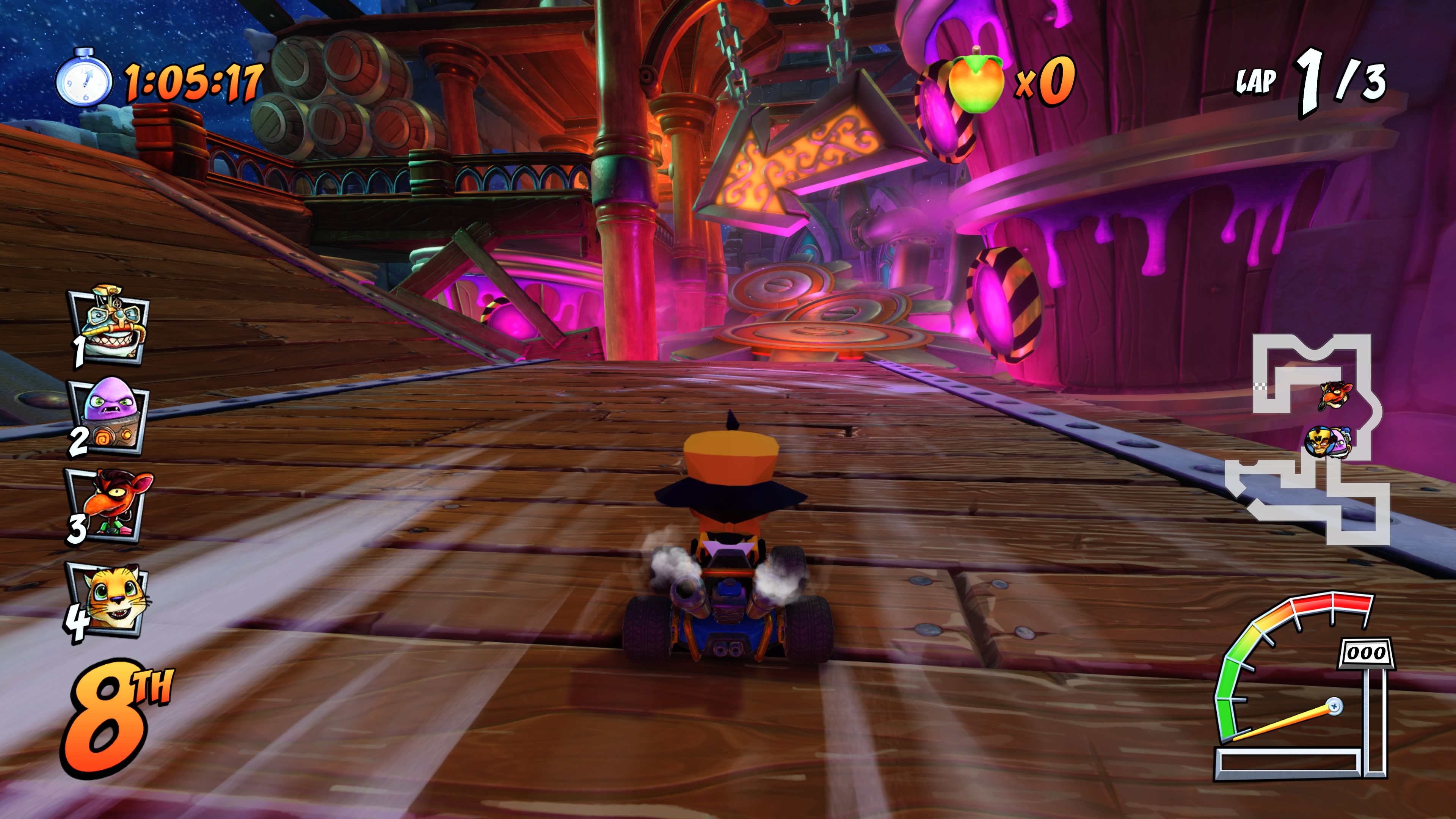 This one is close to the end of the track. Race until you enter the building that heads downwards. As you exit this part, you can see a window for another building up ahead. If you can generate enough speed, you can take out the window by smashing through it, ignoring the left turn sign and cutting out a big chunk of the track in the process. 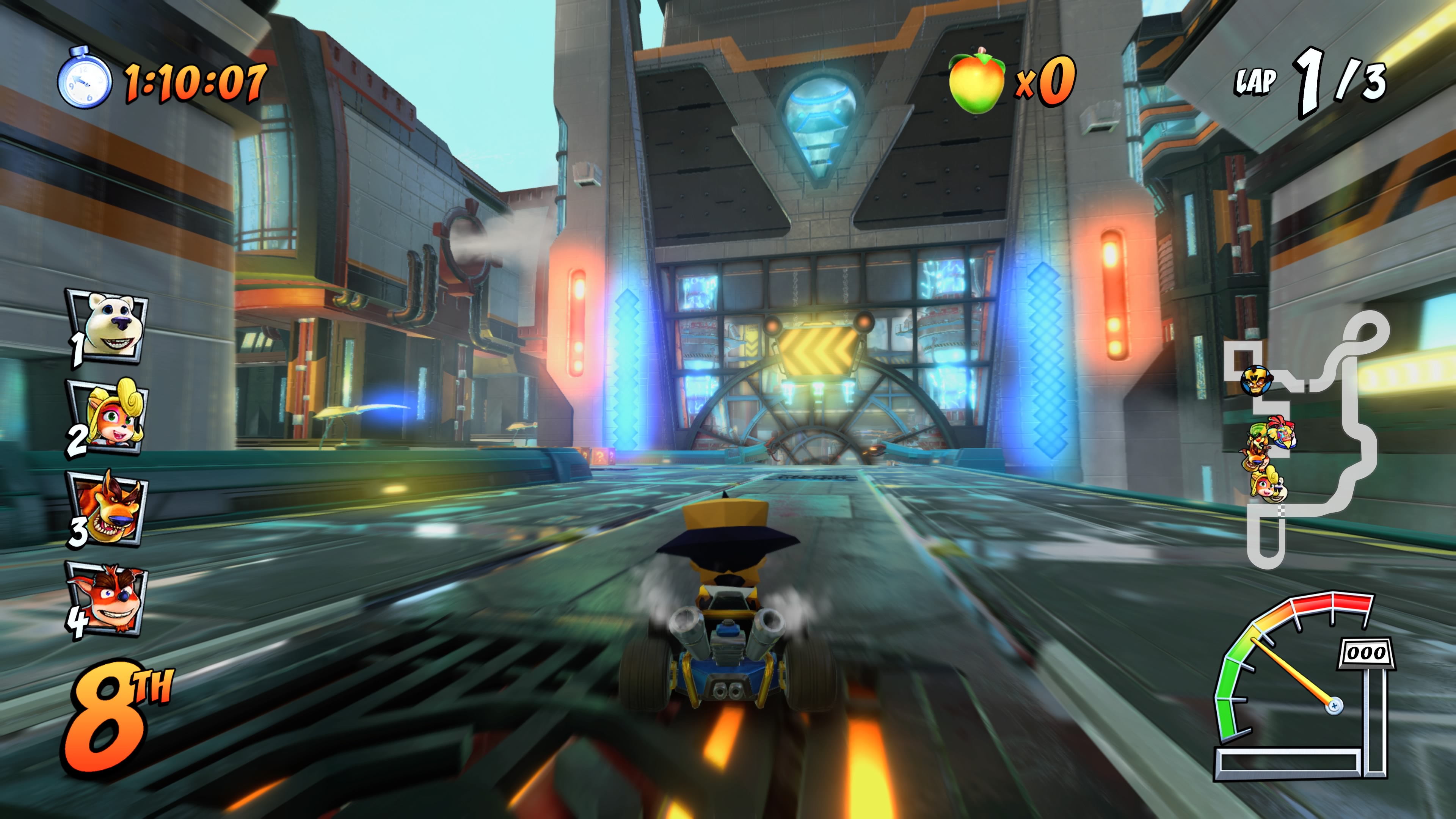 Race on the track until you see a group of turbo pads together. Go over them and as you reach the final one that also has the weapon crates on them, drive off the right-hand side, and you should be able to reach a ledge that should cut off the incoming corner. 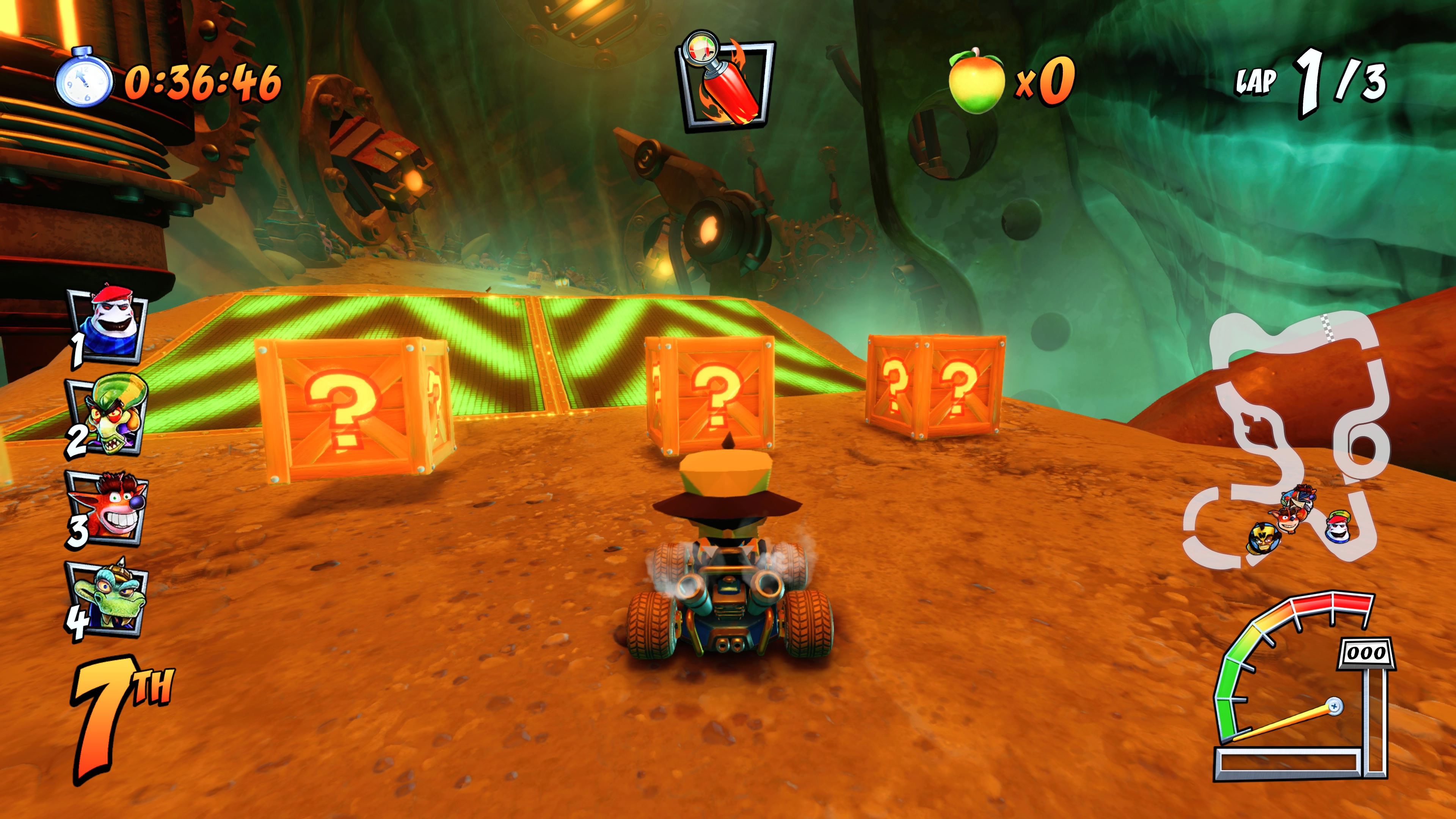 Continue on track until you reach the part that involves the electrified puddles. Once you go up the ramp here and past the weapons crates, the left-hand side should present you with a narrow bridge that with enough speed will see you hop onto and offer a turbo pad at the end to cut significant seconds off your race. 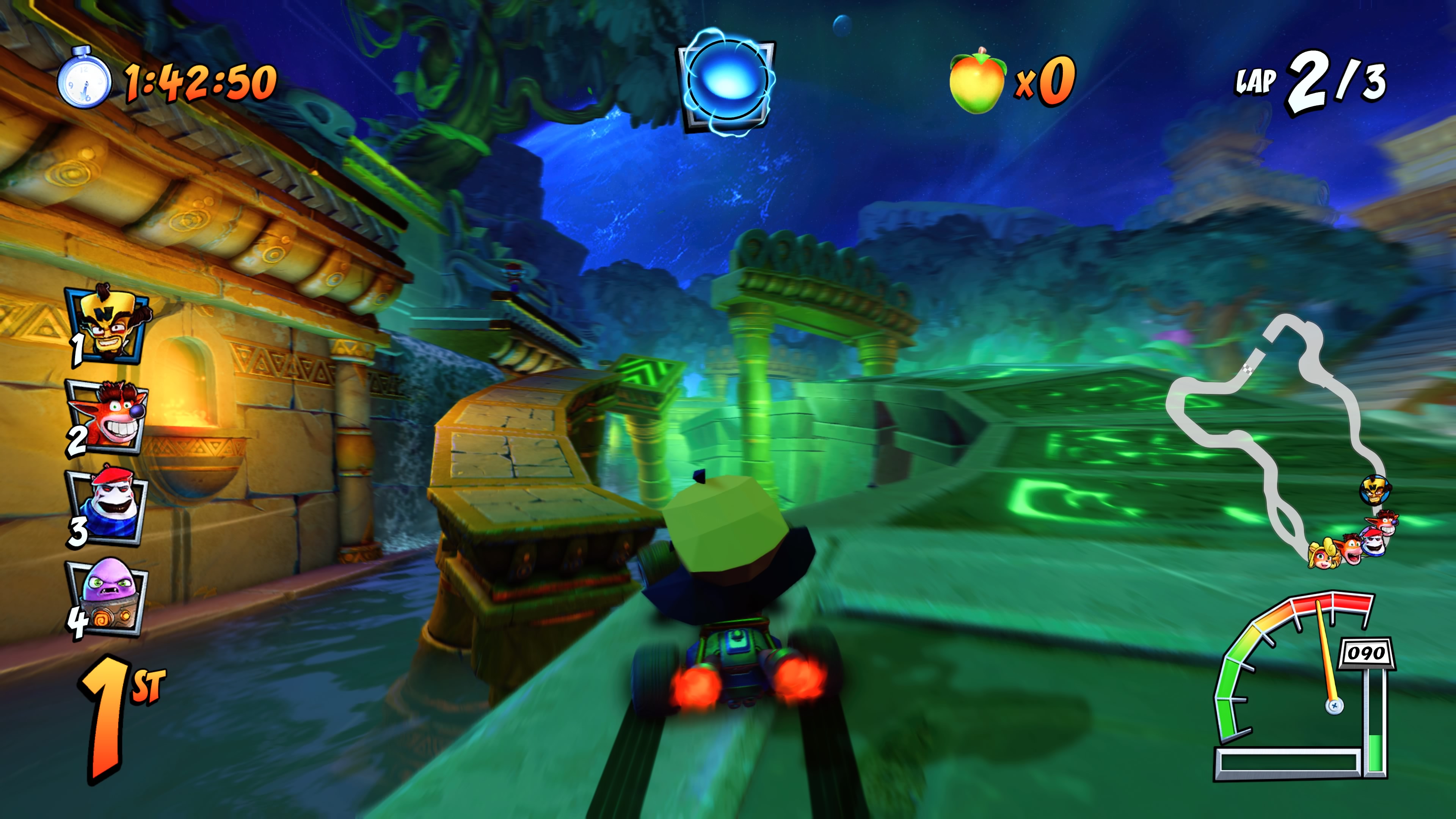 Two shortcuts are available on Meteor Gorge. First, after the U-turn bend near the beginning, there’s a ramp with a turbo pad. If you stick to the left-hand side, you can land on a ledge situated on the side of the cliff that will lead you to a weapons crate and turbo pad at the end. This method should help you avoid puddles meant to slow you down.

The second is after you pass the trigger crate providing a turbo ramp. Go through the Weapons crates and take the turbo pad going horizontally, jumping into the middle of the lava lake. If done correctly, you should land on a raised platform and allow you to burst off the other side. 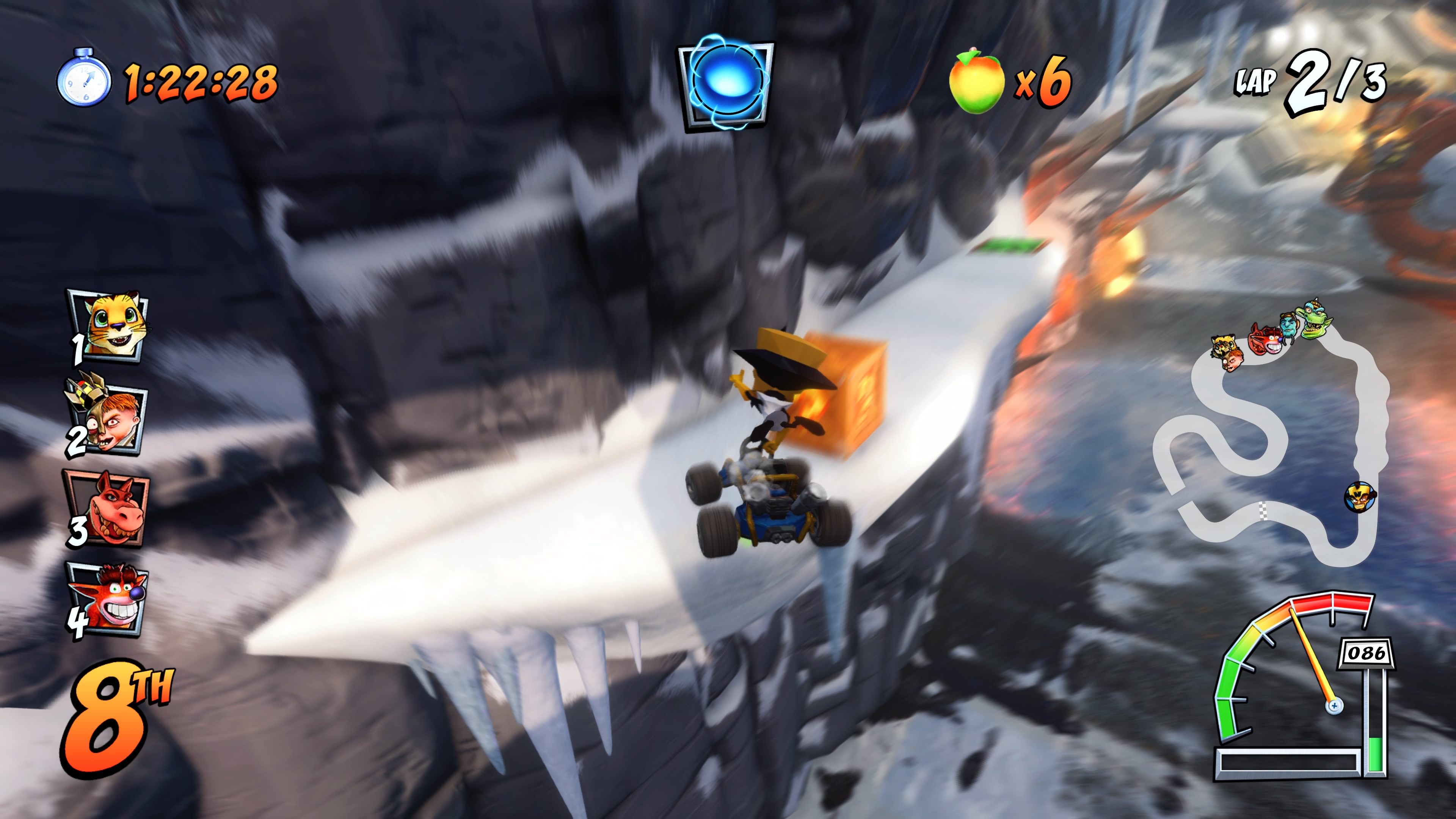 Race through the track until you get to the underwater tunnel. Exiting it, ensure that you are going as fast as possible with boosts and slides. In front of you as you exit will be a large box that with enough speed you can clear when hitting the small ramp. Doing so should take you over the finish line. 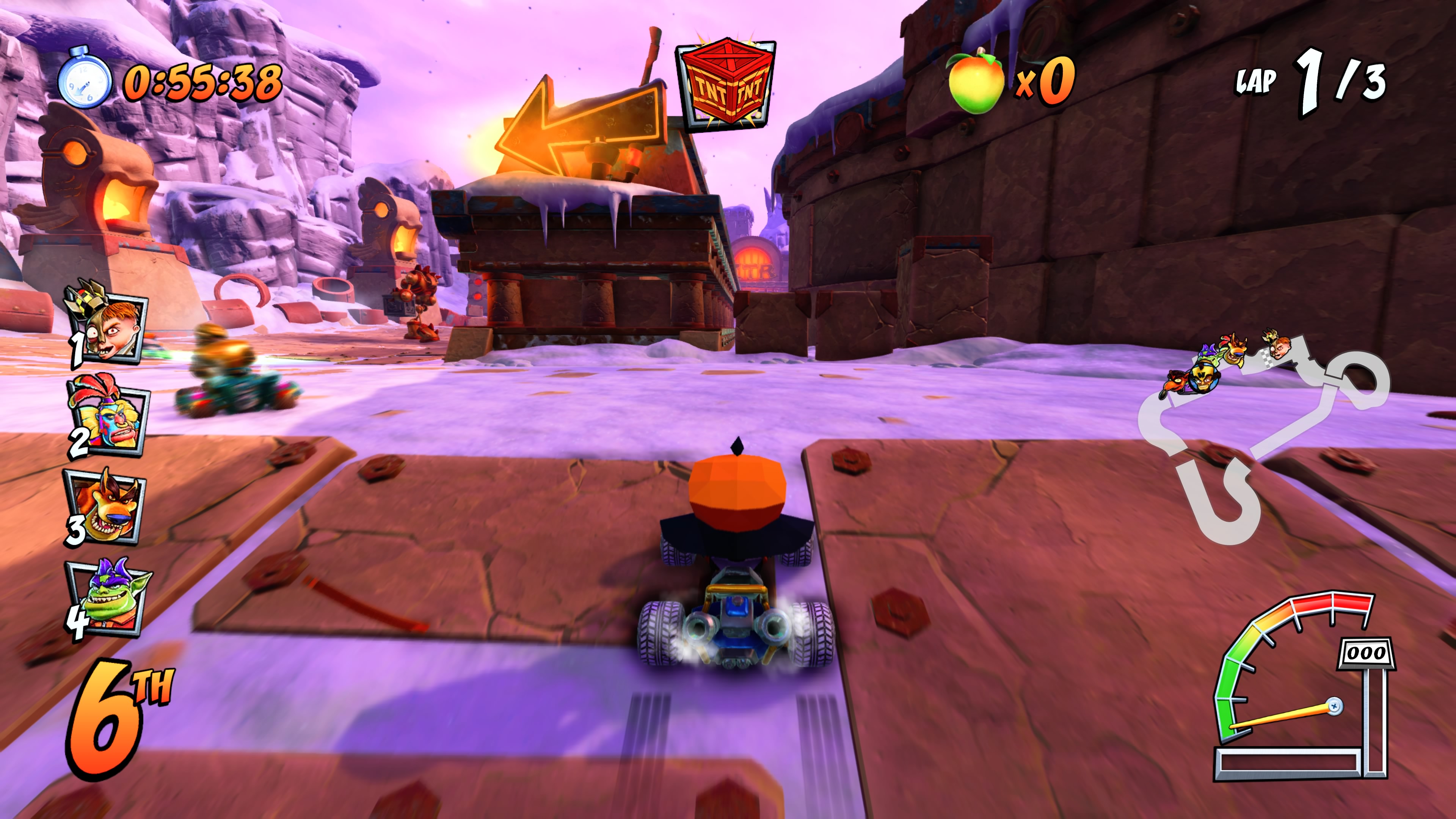 Two shortcuts are present here, both early in the track. First, ensure the trigger crate straight ahead has been activated, so the turbo ramp on the right-hand side is available. With this, you can get enough airtime and speed to boost across the sand, which avoids the impending U-turn. Missing the ramp is devastating as the sand will slow you down immensely.

The second is soon after. Power slide as you complete the jump and head around the corner. You should see a fence with vines running across it. Hitting the wall with enough speed and the right angle at the top of the road where there is a slight incline should allow you to clear it and avoid the next U-Turn. 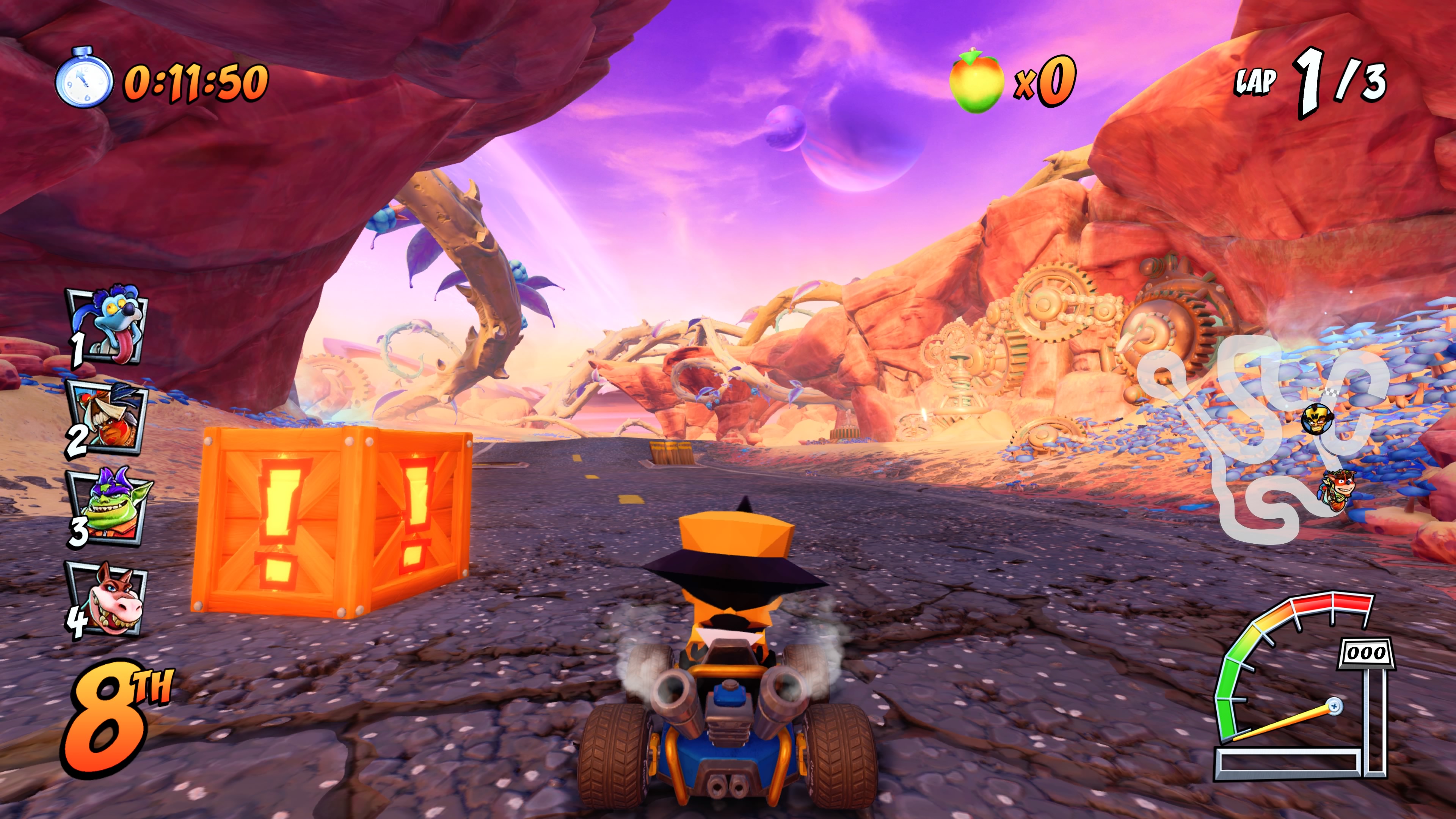 Three shortcuts await you as you tackle Assemble Lane. Firstly, drift around the muddy corners at the start and approach another turn with weapon crates nearby in a bump in the road. If you’re going fast enough, sticking to the left side of the track and timing your jump, you can jump through the gap that appears in the machinery and shaving off some of the track.

The second is inside the factory. Upon entry, jump onto the conveyor belt in the middle of the factory. If you can stay clear of the machines that can crush you, you’ll reach a jump pad at the enough that will provide a timely boost.

Finally, as you reach the large ramp that leads to the dirt track, you can take the alternative path on the left-hand side by leaping across to it. Taking this path cuts out the entire corner and provide an extra weapon crate. 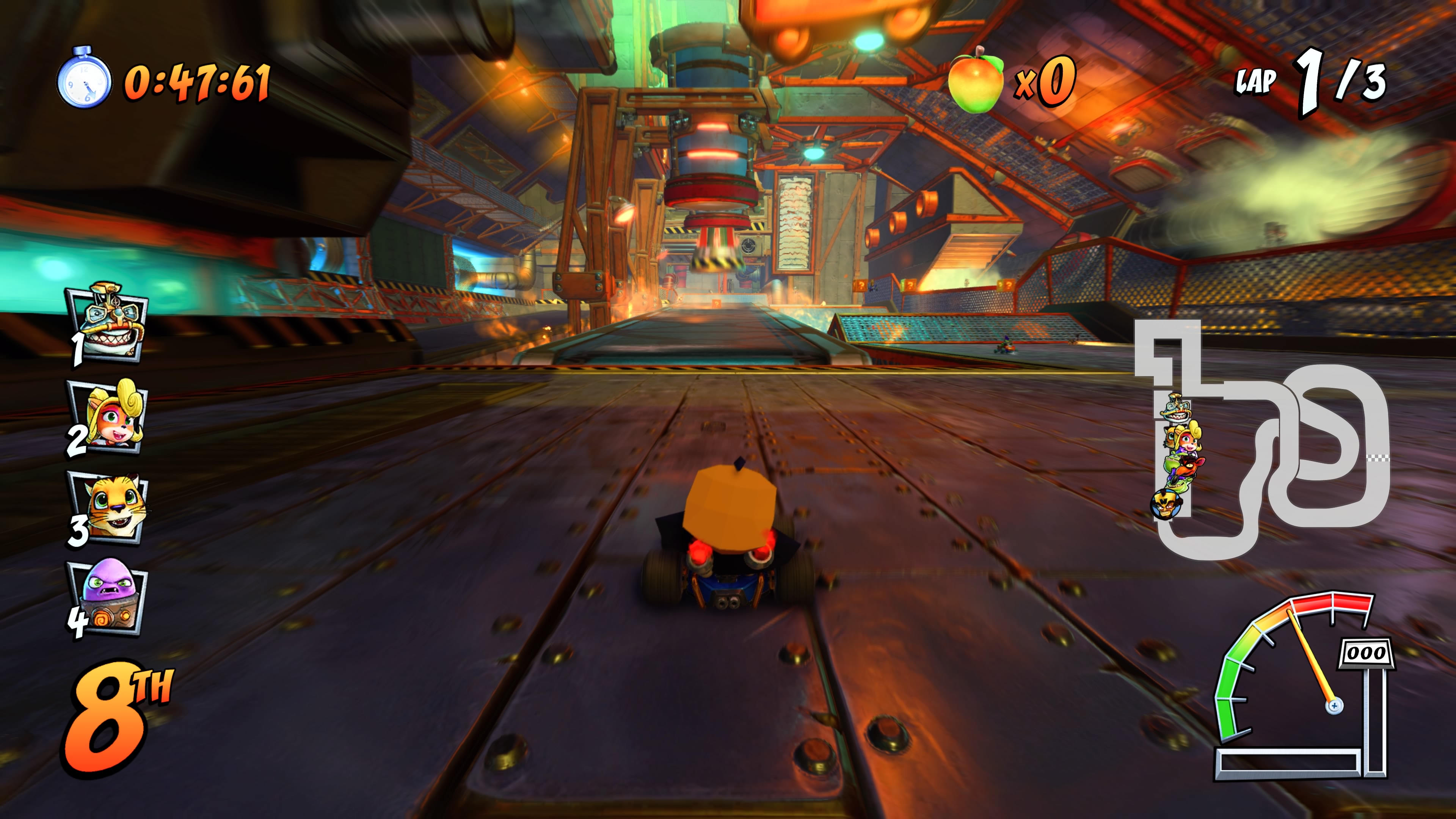 At the beginning of the track, drive off the large ramp and into the first portal, and then jump off the cliff on your left. With this, you should land on another road which will shave more time off your time by skipping this section of the track. 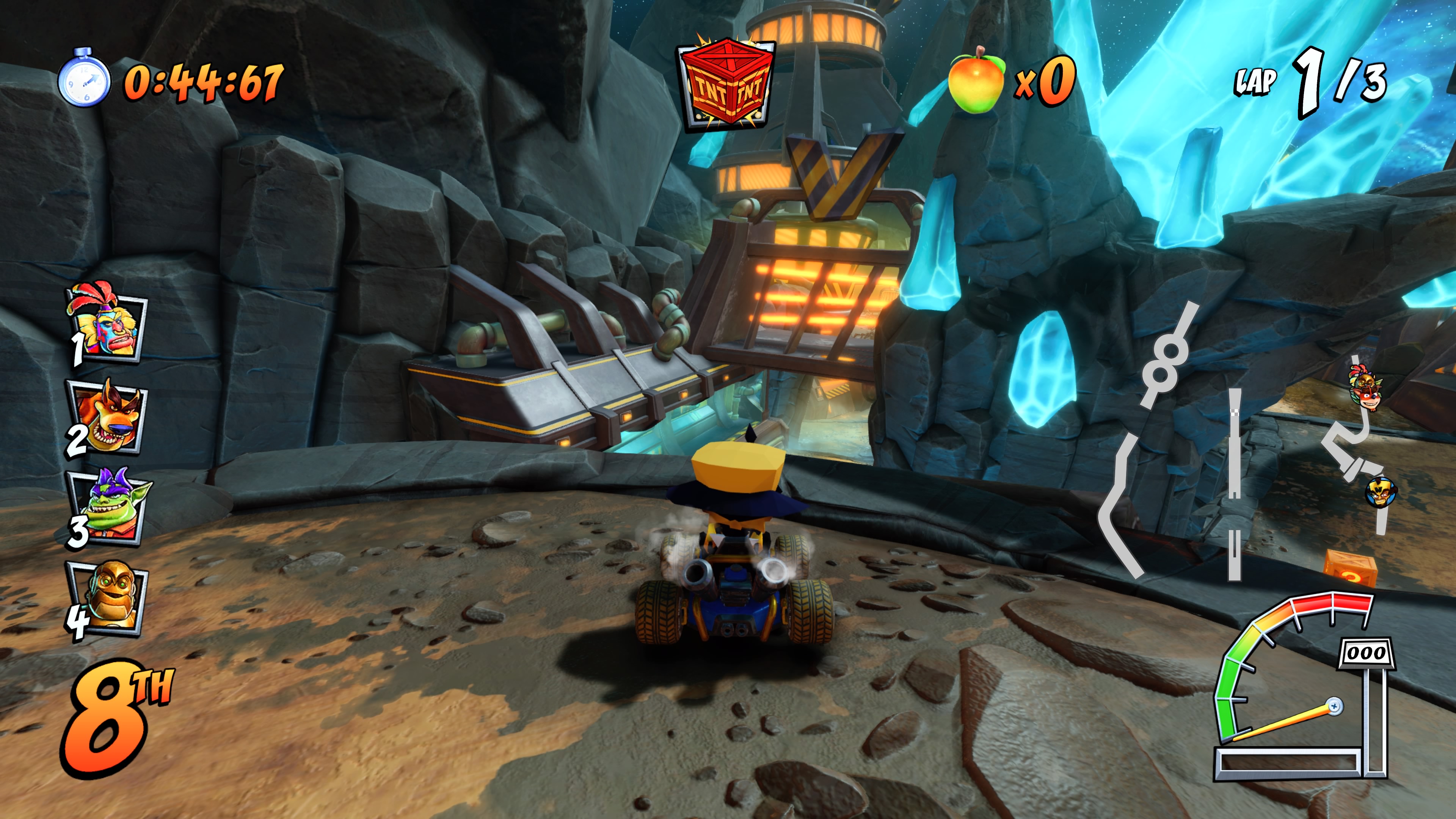 We hope that these help with improving your times on CTR Nitro Fueled!