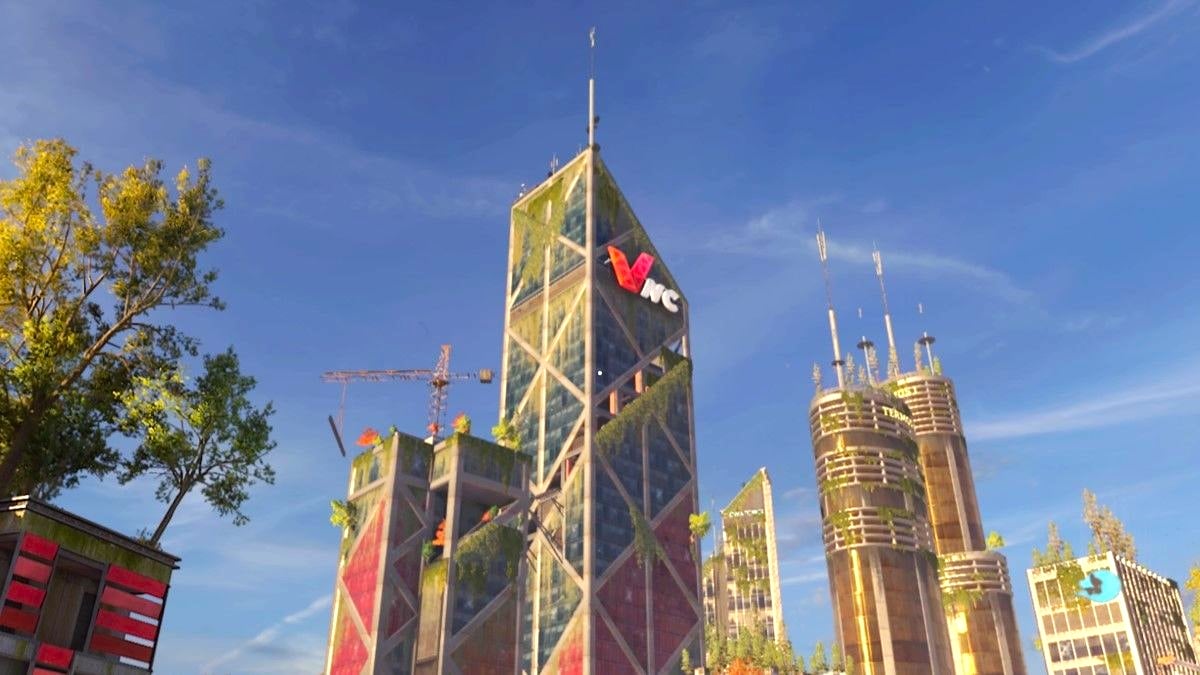 In Dying Light 2 Stay Human, by the time you get the “Reach the top of the VNC Tower” objective during the Broadcast story quest, you’re already a long way up the VNC Tower. But now Rowe’s squad has been wiped out, and you’ve got to reach the roof alone. Fortunately, you just found a Grappling Hook, and it’s going to be very useful.

From the balcony, follow the corridor around to the right, and move the piece of board out of the doorway. In the next room, you’ll have to use the hook, then jump, then use the hook again while in mid-air to get across. Reach the next floor using some good ol’ fashioned stairs, then deal with a corridor full of Infected. Watch out; some of them will come from behind you.

Follow the marker through another room, corridor, and stairway, killing a few more Infected along the way. At the top of the stairs, use the Grappling Hook to swing across to the next tower, then use it again to swing across the murky water to the broken strip of wall. Climb up, then turn around and jump over to the walkway. Turn around again and jump to the next broken strip of wall. Climb to the top, then proceed into the building.

Climb up through the roof hatch of the open elevator, then climb on top of the other elevator, and go through the open elevator doorway to the west. Go up the stairs, get the Inhibitors from the container, and bask in the UV light for as long as you need to. Open the marked door and exchange some curse words with Frank and Lawan.

Turn on the crane using the generator on its east side, and it’ll move the yellow girder to exactly where you need it to be. Use the girder to swing over to the main building, then turn right and climb to the top of the wide ladder. Turn around and swing to the ledge on the far side. Climb the strip of broken wall, then get onto the girder above. From the girders, swing back across to the other side, and jump onto another girder. Now, turn west and swing over to the broken strip of wall. Climb to the top, then shoot the Grappling Hook onto the light fitting directly above you, and swing to the next ledge up.

Jump up to the ledge marked with a yellow rag, then use the light fitting on the left to get across to the room on the left and avoid the Infected below (unless you really want a little extra Combat XP). Use light fittings to get back and forth across the next room as well, then go outside onto another terrace. Climb the broken strip of wall to the south then, from the top, swing across to the walkway to the north. Swing back across using the light fitting on the right, and kick down the ladder. Use the AC unit to get up to the next platform, then jump to another walkway, go left, turn left, and swing over to the strip of broken wall.

Go inside and up the stairs, then through a few more rooms until you’re outside. Cross the gap at the south end of the terrace using the planks, and kick down another ladder. Swing across to the broken strip of wall, then jump to the walkway from the top. Jump to, and climb up, another broken strip of wall, then climb up to the ledge and into another corridor. Go east along the walkway outside, and swing across the gap. Continue carefully along the walkways around the building, and swing from the one that tilts under your weight.

Swing from light fitting to light fitting behind the VNC sign, then wait for a second to restore your stamina before swinging around the next corner. Make a couple of swings across the next gap, then climb the broken strip of wall and run up the sloped roof to the upper platform. From here, run north where you see the curved line of paint, and slide down to the first of three more platforms. Make two jumps, then two swings to the north, and run up another section of roof. Go south, swing across another gap, then run up another two sections of roof. Run, slide, and use the Grappling Hook to swing north before you slide all the way to the long platform. Run up two more sections of roof to reach another terrace. Climb the ladder then swing over to the platform on the other mast. Climb two ladders, then jump to the yellow striped pole and shimmy up to the top platform. Congratulations! You have climbed the highest building in Villedor. Now all you have to do is switch on the transmitter and decide who to give it to.