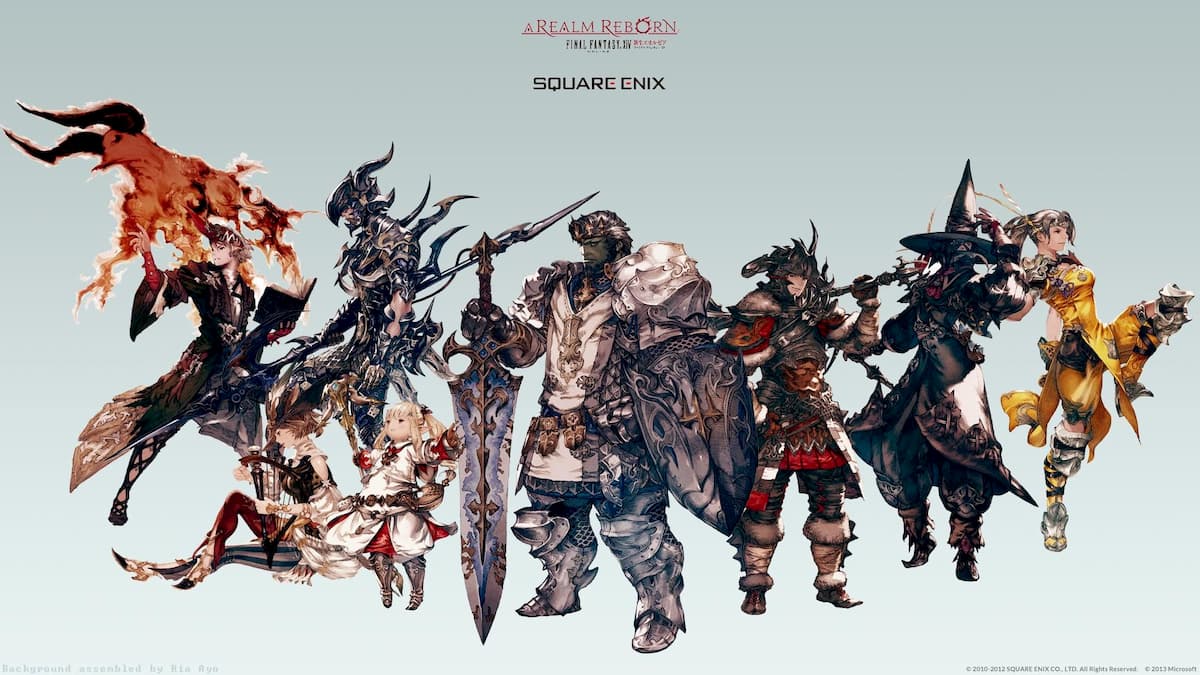 After installing your full game or setting up the free trial, you’re ready to create your character in Final Fantasy XIV. Whether you’ve used character creators in other games or not, the process is pretty straightforward. Each selection will guide you through subsequent sections until you reach the end. There’s no time limit, so feel free to spend however long you want, fine-tuning your perfect character.

You start off by choosing your race. Click around the options for a preview of what the races look like, as male or female. Change their poses or clothes from the sections at the bottom-right of the screen. The selections next to these change the background and lighting for the character creator, allowing you to see your creation in different settings.

The clan you select is mostly a visual effect, changing a character’s access to skin tones or other customization options. For human (Hyur) characters, this change is a little more extreme, with Midlanders being the smaller, petite option, and Highlanders as the more bulky choice. You may also be interested in certain clans for lore purposes. The starting attributes are largely the same across all character types, so feel free to ignore these.

There’s a nice range of customization options for your character. Tweak your character’s height, eye color, hairstyles and color, beard options for male characters, bust sizes for female characters, scars, tattoos, and much more. Or you can randomize your selections if you prefer. If, at any point, you change your mind about something, you can go back and shift things around.

Once you’re satisfied with your appearance, it’s time to select your character’s birthday in the Eorzean calendar. This doesn’t have much of an effect on anything, so pick whichever day you want. The Eorzean deity does have a small effect on your elemental attributes. But these aren’t substantial enough in combat to have a real impact. Again, pick whichever deity sounds coolest to you, or maybe something for your own lore purposes.

The combat class you pick determines which city you start the game in. All three starter cities (Gridania, Ul’dah, Limsa Lominsa) have their own guilds for each class. One of the first things you’ll do in the game is visit these guilds while learning your class. So if you want to play with friends, be sure to pick starting classes in the same city.

The city-state of Gridania is situated in the Black Shroud, with the Twelveswood protecting the Shroud’s Elementals from outside danger. Ul’dah is a wealthy city surrounded by the Thanalan desert, ruled by royalists and monetarists warring for power. Limsa Lominsa is the sea-faring state along the coasts of La Noscea, with pirates, rogues, military leaders, and scholars all under one banner.

You’re also not locked to a single class or job when playing Final Fantasy XIV. You can unlock and play every class on a single character, switching on the fly whenever you want. These are the classes available to you at the start, with their starting cities in parenthesis. Several more will become available to you as you progress through the story.

After selecting your class and subsequent starting state, you’re ready to pick a server. Then you can pick a name for your character, including their first and last names. Get creative or let the character creator randomize a name for you.

Next, you’ll have the option of finalizing your choices. The game then takes you to the opening cutscenes. Sit back and get your first taste of Final Fantasy XIV before controlling your character, taking them through the game’s story and beyond.